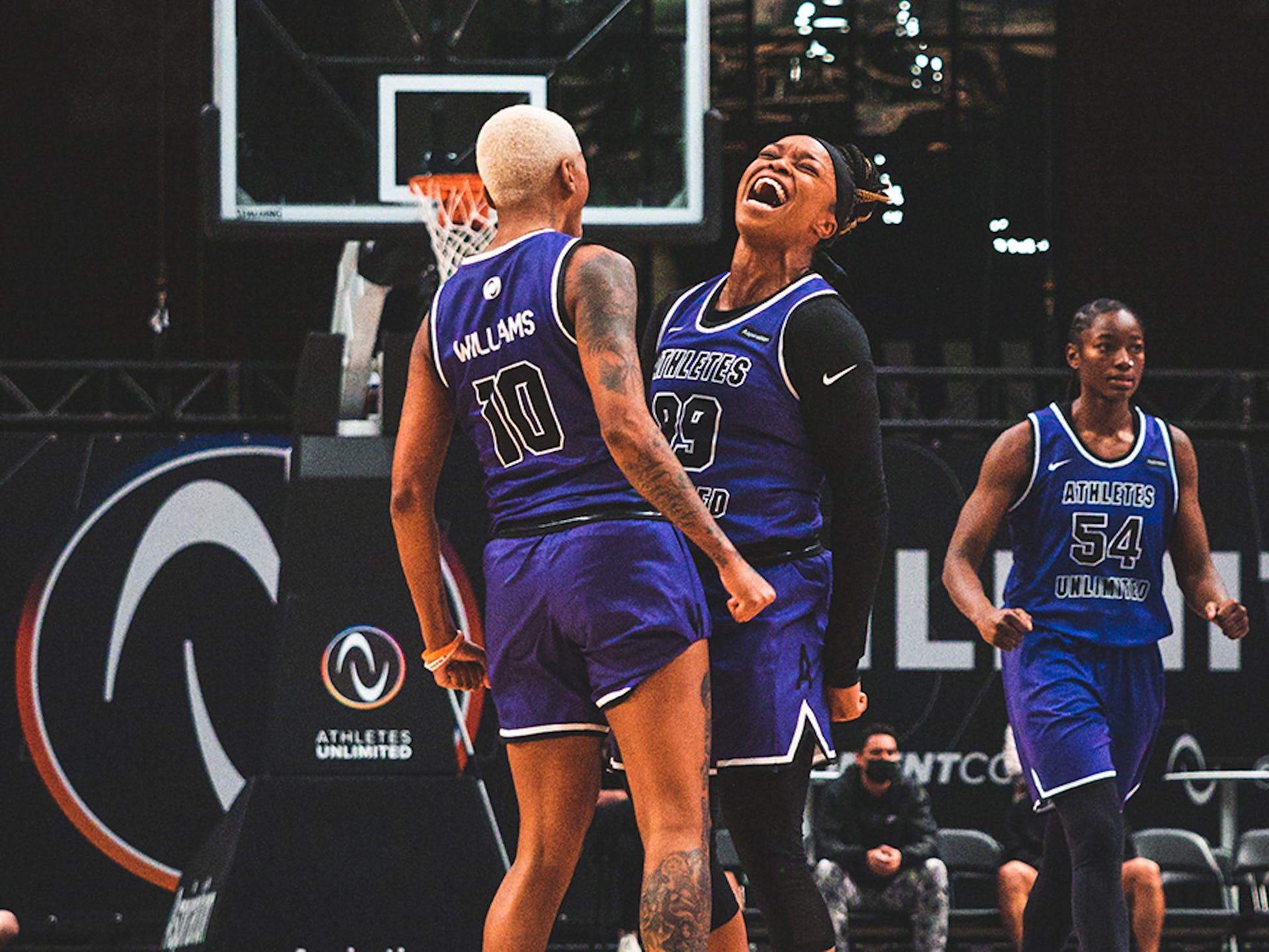 LAS VEGAS — As the WNBA Finals get underway, there are several intriguing storylines coming out of Las Vegas and Connecticut.

But there is no storyline we’re eyeing more at Athletes Unlimited than the one that has four alumni featured in the final series of the 2022 campaign, with our second season set to begin early next year.

Las Vegas’ Sydney Colson was supposed to be knee-deep into an acting and comedy career, but a stellar AU campaign led Hammon to recognize a veteran who could provide wisdom off the court in support of a young and talented lineup. Colson signed with the Aces after the 2022 AU season, and the 33-year-old described this year’s journey with one word.

“Blessed,” Colson said Saturday during Media Day. “For me returning, me being here is the satisfaction for me. Before AU even came about, I had prayed about what I should do next and asking God what I should do next. Just to show me ‘is it time for me to stop with basketball’?

“AU was a sign to keep going. I was still passionate so I went. I expected nothing from that season. I was ready to play AU for a few more seasons and then call it quits and move on. But, Becky called … to me it’s not even luck.”

The blessings continued to shower Colson, who won a national championship with Texas A&M in 2011 and now has a chance to win her first-ever WNBA title.

For Connecticut, a trio of AU stars will see significant playing time, as Courtney Williams is the Sun’s starting point guard, while DiJonai Carrington and Odyssey Sims are key components off the bench.

Carrington’s coming-out party after a successful AU campaign led Miller to increase her minutes from 9.2 per game as a rookie in 2021 to 17.5 this past season.

After averaging 6.8 points per game in the regular season, Carrington is averaging 7.0 per playoff game.

“It’s definitely been up and down,” Carrington said of her confidence throughout the WNBA campaign. “As an athlete, you always go through those phases of kind of doubting yourself, kind of not, going back and forth when you’re not performing to the level that you know that you’re capable of.

“My teammates are so encouraging to me, and they always tell me how much the team needs me and how much I bring whether I’m scoring or not, the impact that I have on the game and on the team, and that continues to build my confidence.”

Providing quality minutes off the bench has been Sims, who was signed to a seven-day contract on Aug. 3, and has been with the team ever since.

Miller has been pleased with Sims at both ends of the court, knowing she can bang from long-range at one end, or be a defensive stalwart in any opponent’s face.

Prior to Sims’ arrival, the Sun were allowing 78.0 points per game; since she’s been on the roster, the team allowed 76.2 points per contest in its final five games. During the playoffs, Connecticut is allowing only 72.8 points per game.

“It’s a surreal moment,” Sims said of going from a free agent last month to being in the WNBA Finals. “I just got here and being a part of this fun group. Everything has been great since day one since I got here. Wouldn’t pick any other team to be with, this team is incredible.”

As for Williams, it’s the “dawg mentality” her counterpart Plum says she brings to the court that stood out during Media Day on Saturday. Williams emerged from the locker room in a black hoodie, with a black eye from Game 5 against Chicago in the conference final, and her trademark smile.

And as she told Athletes Unlimited in July when we caught up with her, it’s “all love” with having three AU players on one WNBA team, and now playing for a championship.

“These already my sisters,” Williams said. “So bringing Odyssey in, bringing in another dawg. We definitely excited to have Odyssey be a part of this. Yeah man, it’s still love.”

Love as in, even though these are two teams that will play uptempo and physical basketball with a championship on the line, the Athletes Unlimited genetics that will flow throughout Michelob Ultra Arena in Las Vegas and Mohegan Sun Arena in Uncasville, Conn. has formed a bond that will never be broken.

“I was obviously watching the last series, I was already calculating like this would be really dope if Connecticut moves on,” Colson said. “It’s great for AU, just the representation for the league. It’s really special. As much as we’re competitors, I’m always gonna be cheering for people from AU. A lot of us got closer and became friends when we were in Vegas for the inaugural season. So of course you’re gonna root for them.

“But, not during this series.”