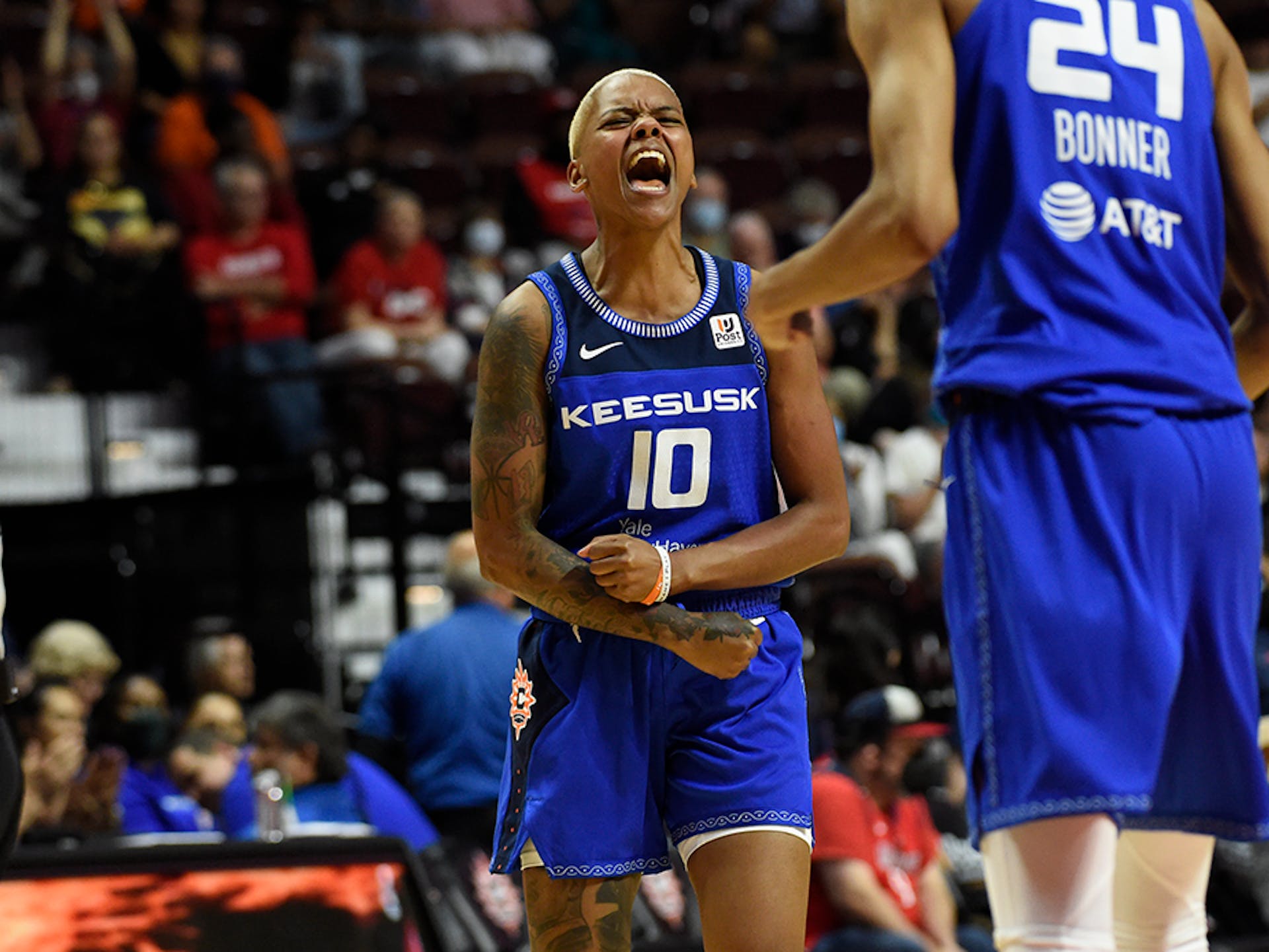 Those the sentiments of Athletes Unlimited basketball star Courtney Williams.

Well, that’s the easy part. Anything and everything surrounding her existence – both on and off the court.

“I mean, it’s the energy that we need, right?” reigning WNBA MVP Jonquel Jones said. “Her energy is consistent regardless if she’s off the court, on the court, putting up big numbers or not. I think we appreciate that, and we love that about her.”

And it’s not just her Connecticut Sun teammates raving, like Alyssa Thomas, who said she loves Williams’ energy and the confidence she brings out of the locker room and onto the court.

Williams is widely respected and adored by counterparts.

Like when the Sun played back-to-back games in Las Vegas, and she went toe-to-toe with All-Star Kelsey Plum.

“She’s a dog,” Plum said. “I’ve only gotten to play with her at USA Basketball but loved my experience. She might be the funniest person in the W. She’s just a hooper. Someone you want on your team, someone that’s a warrior, you want to go to battle with. I always love matching up with her.”

At times, Miller said he’ll find himself in a timeout huddle when his team is in a fourth quarter tug-of-war and won’t hesitate to let Williams know it’s time she “bring us home” and into the victory circle down the final stretch.

It’s why she has the green light to fire from midrange at free will. Miller said while analytics might reveal the midrange jump shot is no longer efficient, Williams is a premier pull-up jump shooter who can tether the nets from anywhere on the court.

“She’s such a big-time moment player,” Miller said. “She loves to compete; she loves the game of basketball. She’s one of my favorites. I love to coach Courtney, that’s for sure.”

Nine uses of the word already, and we’re just getting started with a lot of ‘love.’

She loves to compete; she loves the game of basketball. She's one of my favorites. I love to coach Courtney, that's for sure.
Curt Miller,
Connecticut Sun head coach

While many of the Athletes Unlimited players in the WNBA credited the inaugural season with helping them find their confidence, Williams’ love for the game was reignited. While she feels as if her summer gig in the W is an actual job, her time spent in Las Vegas with 43 other women who helped introduce AU Hoops was “a breath of fresh air.”

“I think it was just so much fun, right? Just going back to just enjoying the game and then not feeling like a job,” said Williams, who averaged a league ninth-best 15.5 points per game. “Because we understand that when we get over here it’s a job. Yeah, you have fun from time to time, but at the end of the day everybody is trying to take somebody’s spot over here. It’s like super cutthroat over here. So it can give you a different type of feeling versus Athletes Unlimited, which felt so relaxed and fun, and you could actually play the game without feeling like ‘I might lose my job.’”

Williams, who was inducted into the South Florida Hall of Fame in 2021, not only become a key cog for whose ever team she was playing for – many times Isabelle Harrison, as the two dubbed themselves a dynamic duo – but was a reflection of laughter, good vibes and the love she speaks of often, all rolled into one.

“I think it showed me that everything is alright,” said Williams, who finished ninth overall on the AU leaderboard with 4,461 points. “I think at times like we get so consumed with what people that never met you a day in your life got to think, and I think just going (to AU) and being around people who actually can be in my energy and actually get to know me, it just let me know like, ‘Court, you gonna be alright.’

“And they told my story. They took the time to actually hear me out you know and get to know me versus what social media got to say.”

Her story, revealing the lovable Williams everyone has come to adore, was important to tell considering she spent the previous two seasons disconnected from the game while playing for the Atlanta Dream. She started her career in Phoenix, for six games, before landing in Connecticut for the last 19 games of her rookie season. She played the next three seasons with the Sun before being traded to Atlanta in 2020. She earned her first WNBA All-Star appearance last season with the Dream.

But after a video of Williams and then-teammate Crystal Bradford surfaced with them involved in a fight outside of an Atlanta area food truck, she was released from her contract. Though there were extenuating circumstances surrounding the altercation, and Williams felt she was in danger and still expressed remorse and apologized for any embarrassment caused, it was still an incident that left the Folkston, Georgia native a bit scarred and in a mental funk.

It was her time with AU and a return to the Sun that brightened her spirit.

“I mean, I’m happy to be here, I’m happy to be back in an environment where I know the love is real,” said Williams, who is averaging 11.5 points, 4.8 rebounds and 3.1 assists per game for the Sun at the All-Star break. “I know at the end of the day, everybody over here got my back. So, you know when you have that it’s easy to just go out and hoop and play basketball and not have to worry about all the stuff going on the back end.”

They told my story. They took the time to actually hear me out and get to know me.
Courtney Williams,
Guard

Aside from Jones, who she came into the league with, and Thomas, the 5-foot-8 spark plug is happy to have fellow AU alum DiJonai Carrington on the Connecticut roster, as the two forged a strong bond in February.

“I think Athletes Unlimited, they gave us the opportunity to build bonds,” said Williams, who was never drafted lower than 7th overall in the five AU drafts. “They put us in situations where they gave us that open space to actually get to know who this person is, not just like ‘this who I’m competing against. I’m actually gonna get to know you. I’m gonna listen to you, I’m gonna get to know your story outside of the basketball lines.’ And I think getting to know DiJonai on that level and just bringing it over here, that’s my sister now.”

Williams, who earned seven game-MVP awards during the AU season, has helped the Sun battle in the Eastern Conference, where they’re one of the top squads heading into the break and she’s all smiles and full of, well, what do you think?

Recap: McCleney climbs 16 spots to No. 4 on the leaderboard in 8-2 win