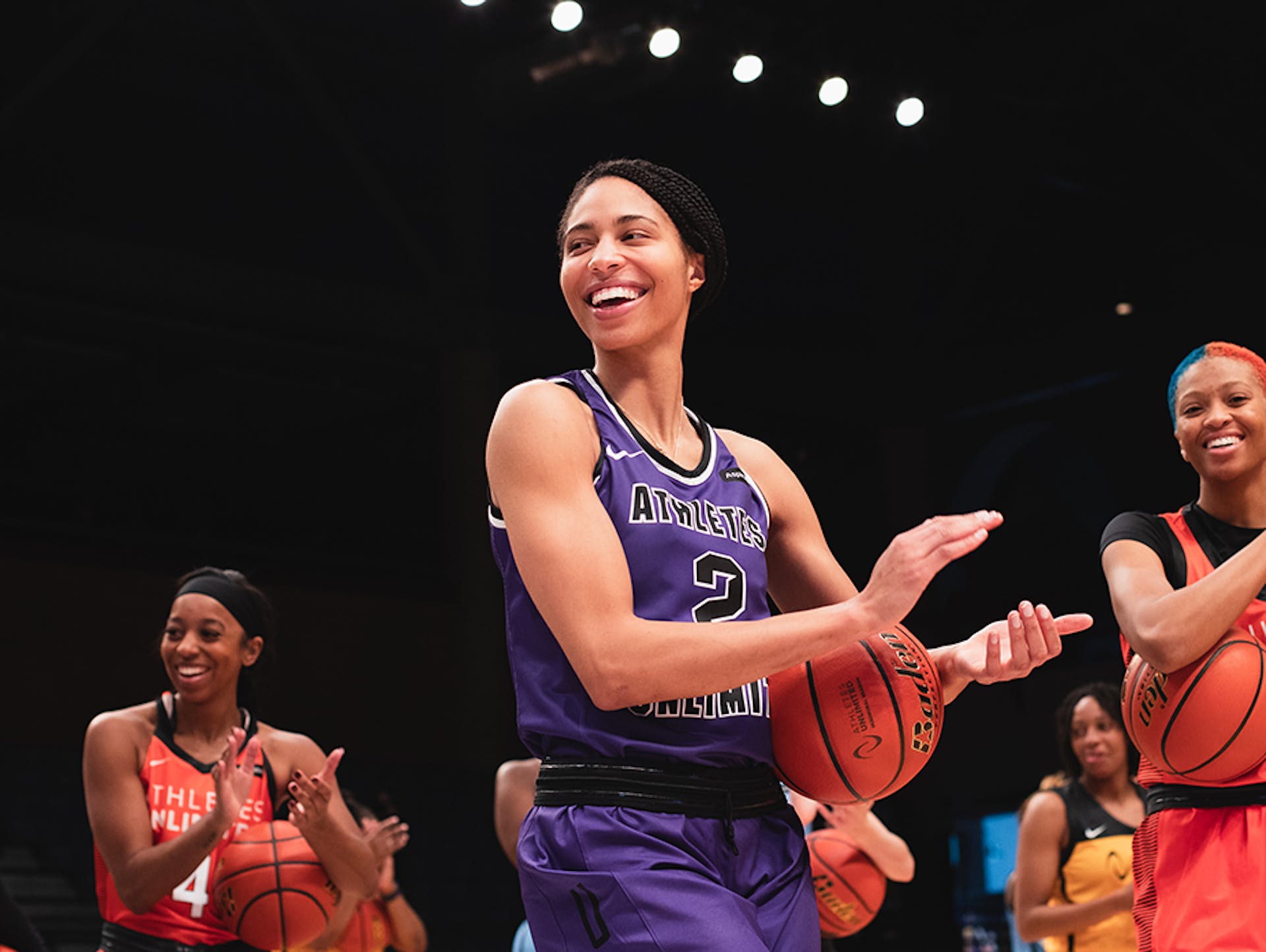 Her last two? A total of 16 points, including a season-low of four points in the Week 2 finale.

Her late great coach from Tennessee, legendary Pat Summitt, would be proud.

While Harrison’s points diminished, it wasn’t for a lack of effort. She averaged 16.4 shot attempts the first five games; she shot a total of 15 times the next two games, both of which were victories by the way.

See, Harrison took a back seat to her teammates purposely, giving them a chance to flourish, while also allowing her an opportunity to captain her squad properly. Since opening the campaign on DiJonai Carrington’s squad, Harrison has been a captain the past two weeks and has a better understanding of what someone like Summitt – the third-winningest coach in college basketball history – went through while roaming the sidelines for 38 years.

“I truly didn’t know what went into it,” said Harrison who holds the Athletes Unlimited Basketball lead with 330 MVP points entering the weekend. “Like when a coach would come in with a scouting report … they put in (a lot of) hours into that scouting report, and you need to respect it. They put their entire life to the side to make this scout and you gotta respect it, you gotta respect the people that put in time and make you successful.”

And when the scouting report isn’t followed, Harrison now understands why coaches don’t want to address players after a game – win or lose.

For Harrison, she hasn’t had to worry much about that with the teams she’s been on, or captained, as she is one of two players in the league to win six of their first seven games, along with Toccara Ross.

Harrison has quickly learned that scouting, playing and coaching is harder than it seems, and with that has come a new admiration for coaching.

Oh how Summitt would be proud.

FOR THE LOVE OF IT

The Tennessee-native fell in love with basketball at five years old thanks to her older brother, David, who was twice named “Tennessee Mr. Basketball” while playing for Brentwood Academy. He continued to play at the University of Colorado before landing in the NBA.

“We’ve always kind of been shaped a lot similar and skill-wise,” Harrison said. “So when he made it to the league, I remember going to his games and how exciting it was and I knew obviously about the WNBA, but that was my first experience into professional basketball. And I felt like, ‘I will be able to do the same thing one day.’”

After playing for Summitt at Tennessee, Harrison was taken 12th overall by the Phoenix Mercury in the 2015 WNBA Draft.

She missed her rookie season while recovering from a knee injury she sustained during her senior season at Tennessee and made her pro debut in 2016. She was traded to the San Antonio Stars in 2017, when she averaged 11.4 points and 6.8 rebounds in 33 starts.

Harrison had arrived, just as she dreamt and knew she would one day.

But as the Stars franchise was relocating to Las Vegas after the 2017 campaign, she suddenly started experiencing abnormal fatigue and soreness while playing overseas. Upon returning home in April 2018, Harrison was diagnosed with an autoimmune condition before training camp. And with a family history of Lupus, she knew what was to come.

She also was prepared.

One of her brothers has Lupus, one of her sisters passed away from it, and another is still dealing with it. Not only was she mentally ready, but her love for basketball sparked the ingenuity to find the positive angle from her medical condition and turn it advantageous toward her career.

“I got to see how they took care of themselves growing up and their diet,” said Harrison, who is playing for the Lupus Foundation of America. “I was just very in tune to their life. I saw it every day, what they did. So if it had to happen, I knew I had people to turn to, to talk to about it. And not only does it help me with my own situation, but it helps basketball too. My body feels really good, I know what I need to be eating and what I need to stay away from.”

And when COVID hit, and Harrison was in Italy just before the world shut down, she managed to fly home on an emergency flight in time to surround herself with family, something she said she needed at that time since she was seemingly gone most of the year.

“I wasn’t concerned cause I was with my family,” she said.

Later that year in the WNBA bubble, she averaged 6.4 points per game for the Dallas Wings. Last season, she bounced back to average 10.9 points and 5.9 rebounds per contest.

Suddenly, it was time for another offseason, and a decision a couple of veterans made much easier for her.

ONE OF THE FIRST

After the 2021 WNBA campaign, Harrison said she was “just not feeling it,” in terms of another offseason abroad.

Then Sydney Colson called and filled her in about Athletes Unlimited. Harrison had heard something but wasn’t aware of the details. So when another veteran of the game, Ty Young, messaged Harrison on Instagram to inquire about her plans for January and February, she already knew.

“She’s like, ‘Izzy you might as well, it’s a good opportunity,'” Harrison said of her conversation with Young. “She kind of broke it down to me a little bit more about what’s going on. So I started getting on the player calls and just really hearing about AU and I was like, the more I hear about this, the more exciting it is.

Harrison, who rarely isn’t wearing an ear-to-ear intoxicating smile both on and off the court, ranks third in the league with 18.4 points per game. She’s averaging 7.0 rebounds per contest and is one of seven players (out of 44) who have registered double-digit steals with 14.

She also loves she’s one of three Tennessee alumnae playing in the league, along with Mercedes Russell and MeMe Jackson.

“It is a Tennessee thing,” she said. “It just gives a very welcoming and homey feeling. Knowing that we all went to the same program, and we carry those values with us today, all because of Pat. I think it’s really cool.”

Harrison said she’s having the time of her life establishing stronger relationships and bonds with players she’s known and played against, but now is also feeding off of a vibe that is much different than the one that reverberates during the WNBA campaign.

“I’m able to see everybody’s stories from top to bottom,” Harrison said. “In most businesses, the top people will get most of the shine. And I think here we do a good job with representing people. … It gives people an opportunity to get to know the players and it goes back to exposure for women’s basketball. You never know what somebody’s story is, but if you put them in a position to talk about it, it just brings more attention to the league. I think it’s amazing.

A league graced with Harrison’s amazing background, love for the game, and unbreakable spirit that has become infectious throughout Athletes Unlimited Arena in its inaugural season – exactly what she wanted.

“I’ve seen this kid since she was little, I always thought that for her size and her athleticism, she’s a high-motor kid,” fellow Tennessee alum and president of the Las Vegas Aces Nikki Fargas said. “Like that size, it’s just constant, constant, put to the pedal kind of player. She’s had rough times, she has. But you know, perseverance. I think you can say this kid has overcome adversity. And she’s persevered.

“Look at where she’s at right now.”

A captain and a mentor in the inaugural Athletes Unlimited Basketball season.

And there’s no doubt, Summitt would be proud.