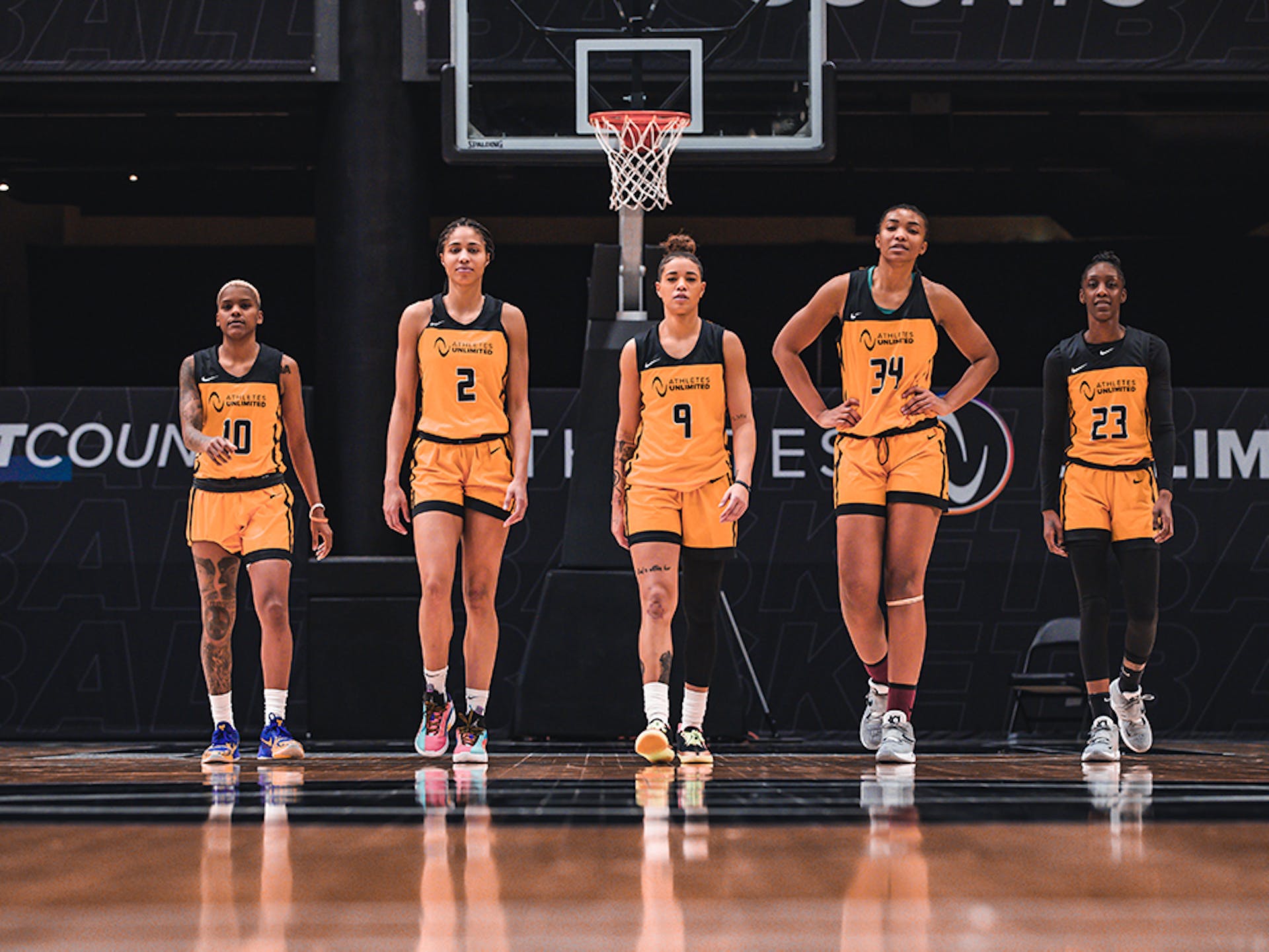 New year, new league. It’s almost time for the inaugural season of Athletes Unlimited Basketball to get underway and we’re ready for tip-off. Fans can watch all the action live from Jan. 26 to Feb. 26 and follow along on social.

To bring fans even closer to the action, Athletes Unlimited will be collaborating with talented content creators in the basketball space for the opening week of the season. Here’s a breakdown of who will be on-site and how to follow them!

Ari Chambers is a multimedia journalist, host, and women’s sports and culture connoisseur based in New York City. She utilizes storytelling to amplify the voices of women and magnify their excellence. Intentionally staying on the women’s side of things, Chambers seeks to show girls and women, world-wide, that their potential is limitless.

Chambers has dedicated her efforts to grassroots coverage and the utilization of social media to close the coverage gap. Most notable in the implementation of social media, Chambers coined the phrase THE WNBA IS SO IMPORTANT, which ultimately became Twitter Sports’ WNBA 25th Anniversary campaign. She has been a reporter for the WNBA and NCAA women’s basketball, covering multiple WNBA All-Star games, NCAA Women’s Final Fours, and ACC Women’s Basketball Tournaments. Chambers has served as Connecticut Sun’s in-arena host, WNBA’s digital news host, host for the WNBA’s Her Time to Play, host for LA Sparks’ “Rooted in LA.” Through Turner Sports, Chambers also hosts “Don’t Sleep” on WNBA Weekly, a weekly show on NBA TV during the WNBA season.

In early 2019, Chambers founded Bleacher Report’s women’s platform, HighlightHER and has grown it from the very beginning to now over 172,000 followers and counting. HighlightHER was the fastest growing women’s sports platform in 2020 and the momentum is not slowing. Through her efforts with and impact of HighlightHER, Chambers has been named to Forbes 30 Under 30 (Sports, 2021),  For(bes) the Culture’s 50 Champions (2021), The Athletic’s 40 Under 40: Rising Stars in Women’s Basketball (2021), Footlocker’s Sole List (2021) and Yahoo’s Changemakers (2021).

Read more about our partnership with Ari and HighlightHER here.

Greydy Diaz is a versatile storyteller and dynamic creator. She’s effortlessly poised on camera and carries with her an infectiously positive energy. Greydy is unique in that her range is very broad, making the opportunities for collaboration endless. Whether leading a fun conversation with young star Paige Bueckers, getting exclusives from WNBA champion Natasha Cloud, or discussing retirement with NBA great Ben Wallace, Greydy’s ability to connect with athletes at all stages of their careers is consistently on display. ​

Her work has been featured on FIBA, The Undefeated, ESPN, Sports Illustrated, SB Nation, and more. Greydy will be bringing fans to the court with her social coverage through the opening week of games.

Jasmine Baker is your favorite award-winning women’s sports culturalist. She’s a lifelong sports fan who began her career in radio and expanded to consulting and designing merchandise for professional teams.

Hailing from Austin, Texas, Baker earned a bachelor’s degree in journalism from Texas A&M-Commerce and studied business administration at the master’s level. During her studies, she was able to fuse her love of sports and media by covering sports at KETR Radio.

Baker has covered sports at the high school, collegiate, and professional levels in the Dallas metroplex. Her experience has allowed her to be a guest on various shows. In 2018, she covered the WNBA as a Dallas Wings beat writer.

She is a rising star in the basketball space as a WNBA grassroots merchandiser, having recently been featured in The Athletic’s 40 Under 40: Rising stars in women’s basketball. You might also know her from her popular Twitter Spaces show, Players of the New School, where she interviews athletes and personalities while examining the culture of women’s basketball.

Thank you to everyone who tuned into today! I got to chat w/ #WNBA hooper @Pr3pE about her upcoming EP, fashion, @AUProSports, how @cvivianstringer playing the piano won her over. 💎
Check it now if you missed it! https://t.co/i3HVnN5asj

She’s now one of the busiest women working in sports as the Director of Brand Strategy for the Metropolitan Riveters, a professional women’s hockey team. Baker has been featured in Sports Illustrated, Time Magazine, Buzzfeed, GQ Sports, USA Today, The Athletic, WSlam, The Atlanta Voice and Fox Sports Radio.

Multimedia journalist, digital podcast producer, and on-air host, Terrika Foster-Brasby covers athletes and teams to tell the stories of others. She brings a perspective to sports that’s real, authentic, and unique, that resonates with fans and media colleagues alike. While women’s basketball (WNBA & NCAAW) is her passion, she’s covered the NBA, NFL, MLB and NCAA Men’s Basketball.

Her bylines include: espnW, ESPN’s The Undefeated, the New York Times, Fansided and Slam Magazine. However, Terrika is most notably known as one of the two voices on ESPN’s Around The Rim women’s basketball podcast, alongside acclaimed women’s basketball analyst LaChina Robinson.

We’re looking forward to having Terrika on the ground in Las Vegas to help tell the story of the inaugural basketball season!

Vic Jacobi is an NBA insider known as CountOnVic who has carved a space for herself covering the NBA. With over 54,000 followers across Twitter and Instagram, Jacobi can be seen capturing content courtside at your favorite team’s games. Her talent doesn’t stop there, as she is a basketball content curator, sports brand consultant and overall dot connector.

Khristina Williams, a 2021 Forbes 30 Under 30: Sports selection, founded the digital sports media outlet Girls Talk Sports TV in 2018. The outlet gives women a voice in the sports media industry and has served as a destination for WNBA social and digital content. She will join Athletes Unlimited Basketball for opening weekend, produce content and engage with fans through initiatives such as a live watch party, Instagram takeovers, weekly mailbags and written content for AUProSports.com.

Read more about our partnership with Khristina and Girls Talk Sports TV here.

Tickets are available via AUProSports.com.

Tweets of the Game: Team Ohlmiller hangs on against Team Douty