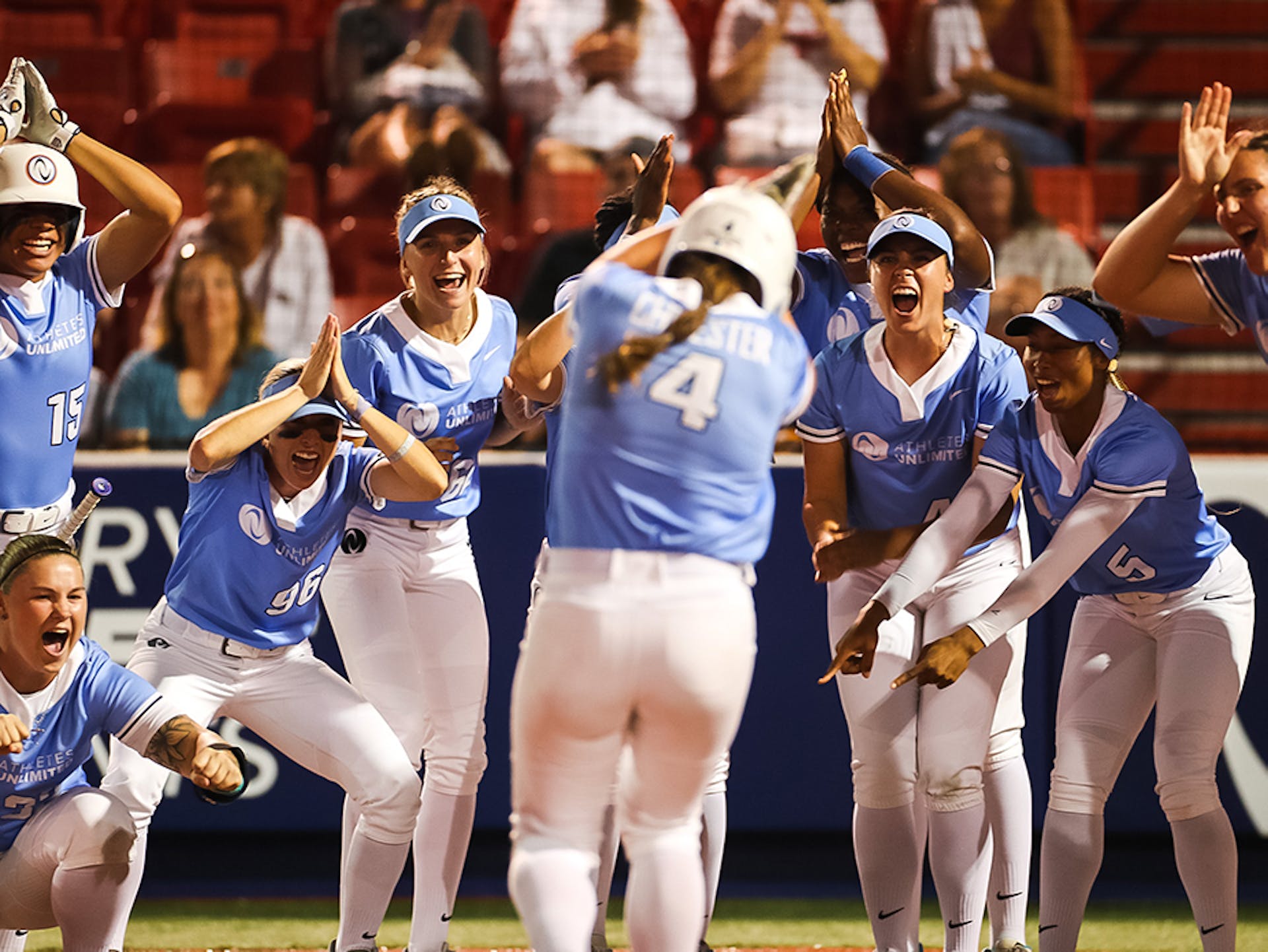 Fans of Athletes Unlimited softball know the drill: Keep one eye on the field and another on the points leaderboard, especially on these manic Monday nights.

The action on both fronts was breathtaking Monday. On the field, Team Jaquish (Blue) scored a stunning 3-2 come-from behind victory over Team Ocasio (Purple) in the first game of the doubleheader at Parkway Bank Sports Complex.

Hot-hitting Amanda Chidester hit a game-tying two-run homer in the bottom of the sixth inning against Aleshia Ocasio, who regrouped and got two quick outs. An error by first baseman Nadia Taylor on a grounder by DJ Sanders opened the door for Bubba Nickles, who hit a double to score pinch runner Ciara Bryan with the go-ahead run.

Team Jaquish survived an interesting top of the seventh, which featured an intentional walk to Amanda Lorenz with two outs and nobody on base. Reliever Carrie Eberle stranded the bases loaded to earn the save and preserve the victory for starter Taran Alvelo, who earned her first victory of the season against two losses.

The result scrambled the leaderboard heading into Monday night’s finale. Ocasio dropped from first to third on the board, with Chidester moving from fourth to first. The top four finishers are captains for the upcoming weekend’s games.

For Chidester, she hit her Athletes Unlimited-leading seventh homer of the season and third of this weekend session. It was a drive to center field against a stiff northeast wind.

“Honestly, I felt like I got a pretty good barrel on it,” said Chidester, who earned an important bonus of 60 points for being voted the game’s MVP 1 by the players. “But I had no idea what was going to happen. I was just, ‘See the ball, get the barrel on it and start running.’ That was my thought process there.”

Both teams entered Monday with 2-0 records.

Team Ocasio put a couple of runs up early. Morgan Zerkle singled with one out in the top of the first. One out later, she rode home on a double to the gap in right-center by Anissa Urtez.

In the second, Taylor walked with one out. With two outs, Ocasio singled, sending Taylor to third Lorenz singled home Taylor to make it 2-0.

The game’s pivotal moment may have been a defensive play by Team Jaquish center fielder Aliyah Andrews in the top of the sixth. Caleigh Clifton led off with a double to right-center and moved to third on a sacrifice by Taylor Edwards. The next batter, Taylor, lifted a flyball to medium center field. Andrews caught it and fired home to get the speedy Clifton at the plate to end the inning.

“I wouldn’t necessarily say I thought I had her from the start,” Andrews said. “I just thought about getting behind the ball and making sure I put a lot of power through it and to get it online. But I just knew it was going to be a close play. CC (Clifton) has speed, and it was kind of a deep ball. So I knew I had to get behind it and throw it as hard as I could.”

Alvelo sailed after giving up the runs in the first two innings. She won MVP 2 honors with Nickles earning MVP 3.

“I think it was just definitely taking it pitch by pitch and trying to keep my focus on that specific pitch to that specific batter and working for my teammates,” she said. “I knew that with our lineup, we were going to find ways to score. So I was just trying to keep the runs down as best I could to give our team an opportunity to come up big like they did.”

Reliever Eberle got two quick outs to start the seventh before Team Jaquish decided to walk Lorenz intentionally. Lorenz has been hot, but they put the tying run on base with two outs. Zerkle followed with a single before Hannah Flippen walked to load the bases. Eberle got Urtez looking to end the game and have everybody on Team Jaquish breathing a sigh of relief

“Amanda’s been having a hot bat right now,” said Chidester, Team Jaquish’s first baseman. “The last thing we wanted was hitting a homer and (tying) the game with one swing, which she is definitely capable of, and she’s done it the last two games. It wasn’t a bad move on SJ’s (Sahvanna Jaquish’s) part to make that call. Put the pressure on the other hitters to come up big in the situation.”

Ocasio (3-3) worked six innings, giving up five runs while walking five and striking out three as she took the tough-luck loss.