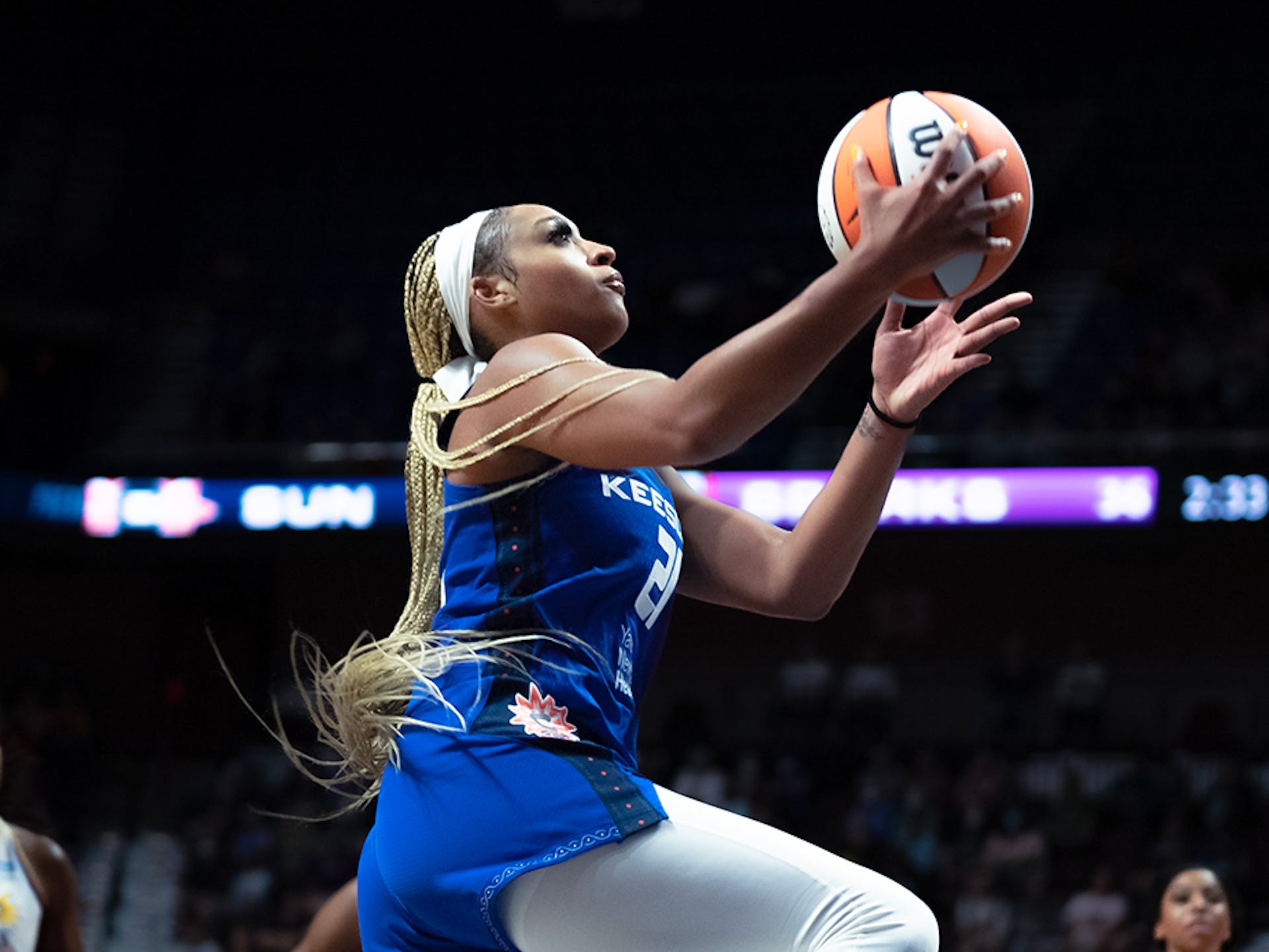 One thing that DiJonai Carrington knew from a young age was the path to success did not come easy.

“I have a tattoo on my body that says ‘never sacrifice what you want most for what you want at the moment,'” Carrington said recently before her Connecticut Sun played the Las Vegas Aces. “Don’t sacrifice those little things, you know, for the end goal and I think that that’s what got me here today is I had to say no to things.”

Throughout her four years playing basketball as an undergraduate at Stanford to spending a year as a graduate student at Baylor, Carrington enjoyed herself from time to time, but she knew what needed to be done to get to the next level.

There’s no doubt that living with her father, Darren Carrington, who spent eight years in the NFL and attended two Super Bowls has influenced this kind of discipline.

“He had already gotten to where we (along with her siblings) want to get to and so I think that that’s the biggest thing was, we had that role model, we had that person who actually did achieve all the things that we want to achieve,” Carrington said.

Finally, all those sacrifices paid off when the San Diego-native was picked No. 20 overall by the Sun in the 2021 WNBA Draft.

Although she was utilized for her defensive presence and the energy she brought off the bench, Carrington had a relatively quiet rookie season. That made her hungrier in the off-season to establish more of a presence coming out of her first year in the W.

After she was named to the 44-player Athletes Unlimited roster in January, that presence was definitely felt throughout those five weeks.

For those who even casually kept up with the inaugural season of Athletes Unlimited, Carrington was a name you were familiar with, whether she was captaining a team, teaming with Natasha Cloud to form one of the best tandems in the league, or posting dazzling pictures from impromptu photoshoots with Las Vegas’ famous skyline serving as the backdrop.

Carrington was recognized at the end of the season for her consistency. She was one of only two players to score in double digits for all 15 of the games played and finished seventh overall on the leaderboard. The 5-foot-11 guard/forward was also named to the inaugural All-Defensive team as part of the ‘Fab 5.’

“She was just confident and was just free and was able to play her game and I think that just gave her a lot of confidence,” veteran player and Connecticut teammate DeWanna Bonner said about Carrington’s time with AU.

“I’m a hooper you know what I mean,” Carrington said as she admitted that AU helped remind her of the capabilities that she may have underestimated in herself that first year in the WNBA. “I’ve always been confident, but as a rookie, you come in and your role completely shifts from what you were the year before [in] college and trying to assimilate to that new role and still remember what you are capable of, but play within the system that you’re in now, was hard for me.”

Carrington isn’t the only one who noticed this confidence boost as her statistics have spoken for themselves this season. She has pretty much doubled her numbers in all aspects of her game with the Sun.

So far, she has averaged 7.5 points per game with 19 games played compared with last season’s 2.8 points per game in the 24 games she appeared in. Carrington also increased her average minutes played from 9.2 minutes last season to 19.1 minutes currently.

“Now when she gets off the bench here, it’s just her world,” Bonner said.

Going into this season with the Sun, the now second-year player said she is ready “to make sure that every single little thing that I do matters on this team regardless of a point system.”

The structure of AU allowed Carrington to develop accountability in all aspects of her game and she has carried that over to this season with Connecticut.

Sun coach Curt Miller said Carrington continues to be that defensive spark and energy off the bench much like in her rookie season, but he has seen the shift in her game.

“It’s a real credit to her as she came back with a ton of confidence because of AU,” Miller said after the Sun handed the Aces their second loss of the season, 97-90, on June 2. “She is a very talented and important piece for us.”

Carrington sees herself as a role player and said she wanted to carry the mindset from AU that “every little thing matters” to her team during this season.

Much like she said herself, we all “have the same 24 hours, but it’s just really how we use them.”