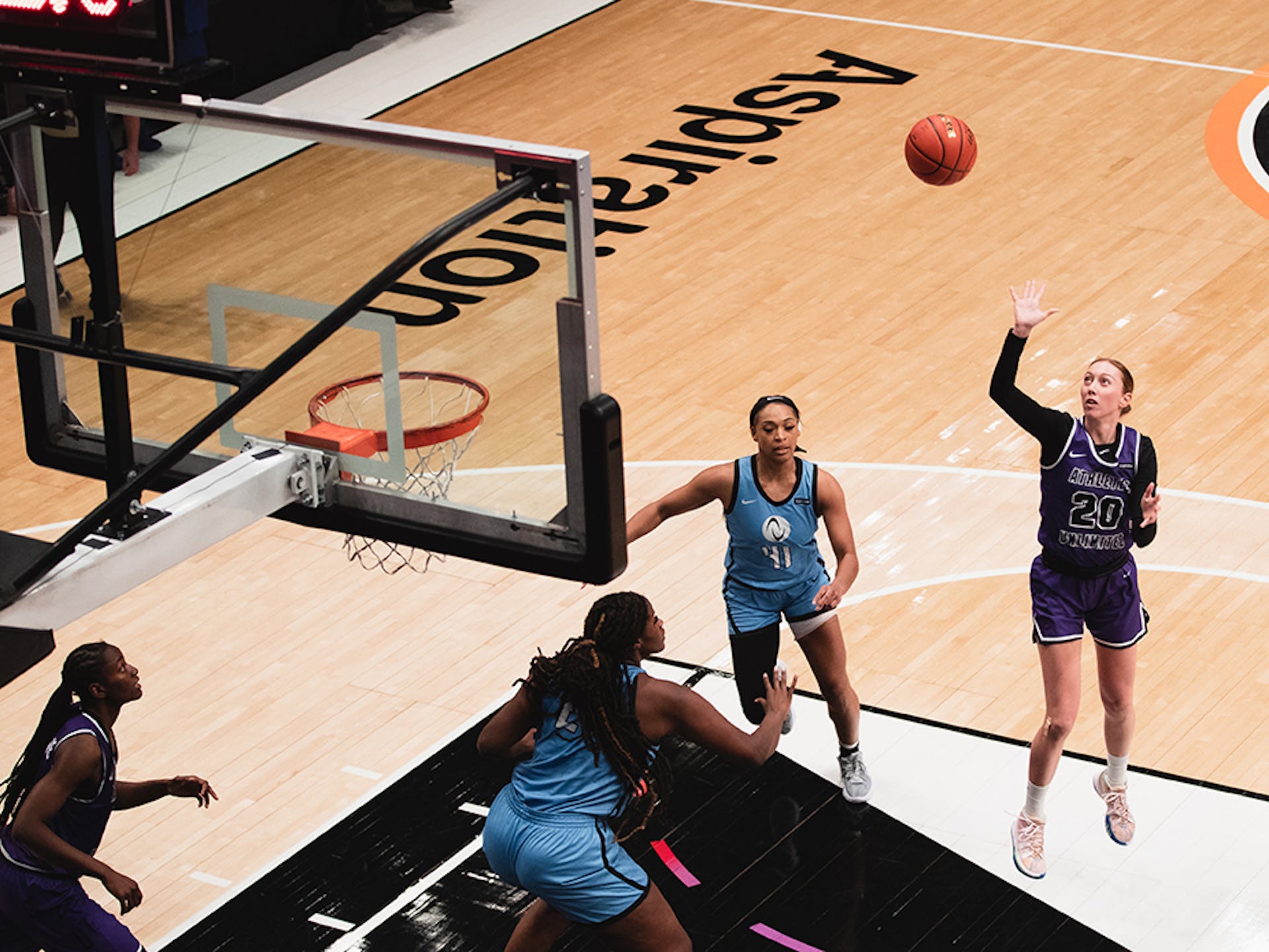 And-one: Slang term used when a player scores a basket and is fouled on the play, earning two points “and one” free throw attempt.

Assist: A pass that leads directly to a basket by a teammate. It’s worth 10 stat points in the Athletes Unlimited Basketball scoring system.

Backcourt violation: Once a team has possession on its offensive end of the court, it cannot touch the ball on the other half of the court unless the opposing team touches the ball first.

Back Door Cut: A player approaches quickly from behind a defender toward the basket.

Back Screen: An offensive player moves away from the basket to set a screen for a teammate.

Bank shot: A shot aimed at the backboard so that it caroms, or “banks,” into the basket.

Box Out: In an attempt to block an opponent and set up rebound opportunities, a defender gets between a teammate and the basket.

Brick: Slang for a hard, errant shot that bounces wildly off the basket or backboard.

Captain: The top four players on the leaderboard are designated team captains. They draft and run their team throughout the week of competition.

Center: Usually the tallest player on a team, the center plays near the basket and is primarily responsible for rebounding, scoring and blocking shots.

Charging: When an offensive player runs into an opponent who has established a stationary defensive position. The offending player is charged with a personal foul and loses eight points. The player that draws the foul earns four points.

Charity stripe: A slang term for the free throw line.

Cut: A quick move by an offensive player, used to create separation from a defender.

Cylinder: The rim and the area directly above it.

Dime: Slang term for an assist.

Double dribble: A violation that occurs when a player discontinues their dribble and then begins it again. The result is loss of possession.

Double-team: A defensive tactic in which two players guard one.

Dunk: Slang term for forcibly putting the basketball through the hoop. Also known as a slam dunk.

Fast break: An offensive tactic in which the team that gains possession of the ball pushes it quickly into the opponent’s end of the court, hoping to get a good shot off before the other team has a chance to set up on defense.

Field goal: A basket scored on a shot taken during the normal course of play, worth 20 stat points.

Flagrant Foul: Excessive or aggressive contact with an opponent.

Free throw: An uncontested shot from a designated mark on the floor (the free throw line) 15 feet from the basket. A free-throw attempt is awarded after personal fouls that occur during a shot attempt, all technical fouls and when the foul limit is reached in a quarter. A free throw is worth one point on the score sheet and 10 stat points on the leaderboard. Also known as a “foul shot.”

Fouling out: According to Athletes Unlimited’s rules of play, a player who accumulates six personal fouls is disqualified from the remainder of the game.

Full-court press: A tactic in which a team defends the entire length of the court. A full-court press is intended to pressure an opponent into turning the ball over.

Give-and-go: An offensive tactic in which a player passes to a teammate, then makes an abrupt cut and receives a return pass.

Half Court Press: Defense pressure placed on the opponent in the front court area.

High post: Generally considered the upper third of the key; the area near the free-throw line. A player stationed in this area offensively is said to operate “in the high post.”

Hook shot: A one-handed shot taken with a high, sweeping motion. Hook shots are especially difficult to block because the shooter’s body shields the defender.

Lane: The outlined or painted area near the basket. During play, offensive players are not allowed to remain in this area for more than three consecutive seconds.

Layup: A shot taken very close to the basket.

Low post: Generally considered the bottom third of the key. Players closest to the basket are said to be stationed “in the low post.”

Man-to-man defense: A tactic in which each player is solely responsible for guarding one player from the opposing team.

MVP Points: After each game, players and members of The Unlimited Club vote for players who they feel had standout performances. These points are added to the player’s individual total. Players can earned MVP 1: +90 points, MVP 2: +60 points, or MVP 3: +30 points.

Off the Dribble: Shooting the ball while advancing toward the basket.

One-and-one: A bonus free-throw is awarded when the opponent accumulates too many fouls in a half; the free-thrower takes a shot and if a basket is made, gets a second free-throw.

Over-and-back Violation: An offensive teammate returns a ball from the front court to the backcourt.

Paint: Slang for the area also described as the lane. A player stationed in this area is said to be “in the paint.”

PEC: Abbreviation for the Player Executive Committee; group of five athletes within each AU league that meets weekly to work on all aspects of the sport, from identifying players to add to the roster to establishing the rules and scoring system.

Pick: Also known as a “screen,” a pick is an offensive tactic in which one player becomes a stationary obstacle for a teammate to use to create space between themselves and a defender.

Pick-and-roll: An offensive tactic that involves one player picking the defender who is guarding the player with the ball. The player that sets the pick will then “rolls” to the basket, sealing off the athlete they picked in hopes of receiving a pass.

Point guard: The point guard is primarily responsible for bringing the ball up the floor on offense and distributing it to teammates. Typically, point guards are among the smallest and fastest players on the team and are adept at ball handling and passing.

Power forward: Like a center, a power forward typically is one of the tallest — and often strongest — players on the team. The power forward can also be referred to as a “four.”

Shot clock: Each team has 24 seconds to attempt a field goal. The shot clock displays the time remaining, and failure to shoot within 24 seconds results in loss of possession.

Shooting guard: Also known as an “off-guard” or “two guard,” the shooting guard typically is a skilled offensive player and spends most of an offensive possession closer to the three-point line than the basket.

Sixth man: The first substitute to enter the game is referred to as the sixth man and is typically a team’s best player who is not among the five starters.

Small forward: Often the most versatile player on the court, a good small forward is able to shoot, pass, defend and rebound. It can also be referred to as a “three.”

Steal: To take the ball away from the offensive team, either off the dribble or by intercepting a pass. A steal is worth 10 stat points.

Technical foul: The penalty for a violation of conduct such as fighting, abusive language or excessive delay of game. Technical fouls result in free throws for the other team and possession changes.

Three-point play: When a player converts the free throw awarded after being fouled on a play in which they still scored a basket.

Three-point shot: A field goal attempt from behind a designated line that forms a semicircle 20 feet, 6 inches from the basket in international play. When made, it counts for three points. Slang terms include, long-range shot, triple and trey. A three-point shot is worth 30 stat points.

Transition: When a team segues from defense to offense or vice versa.

Trap: Two defensive players team up on the ball handler.

Traveling: A violation that occurs when a player moves with the basketball without dribbling. The result is loss of possession.

Triple-double: When a player reaches a score of ten or more in at least three of the following statistical categories in a game: assists, points, rebounds, blocks, steals.

Turnover: Any play or violation that results in loss of possession. A player loses 10 stat points for a turnover.

Violation: Breaking of a rule not resulting in a free-throw, but rather a throw-in.

Weak Side: The side of the court absent the live ball.

Zone defense: A tactic in which players are responsible for defending areas of the floor instead of individuals. Zones are allowed in Athletes Unlimited Basketball.