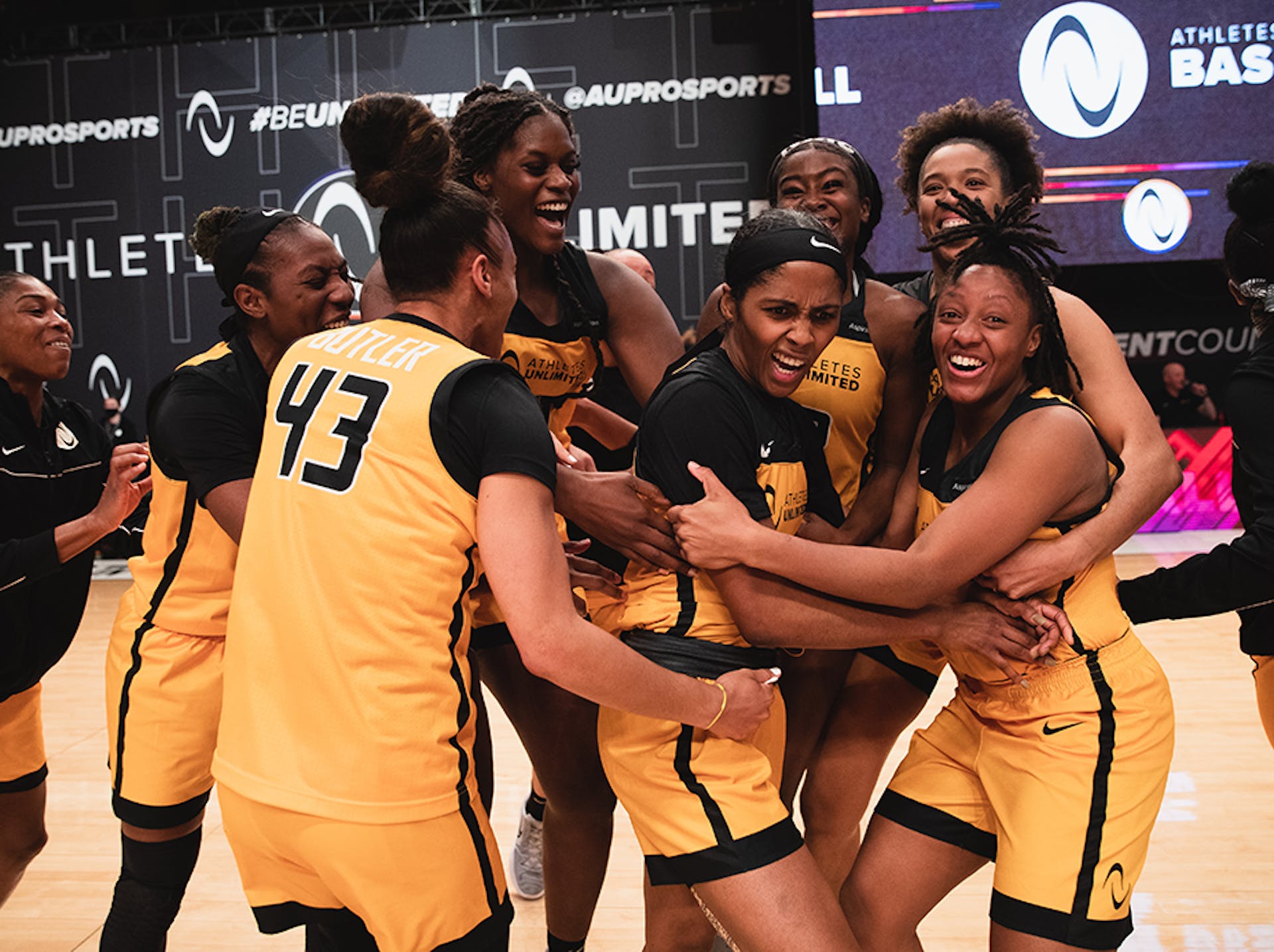 Regulation wasn’t enough time to decide the winner of a deadlocked battle between Team Cloud and Team Hawkins on Friday evening. It appeared one overtime wouldn’t be enough either.

Until Sydney Colson fired a buzzer beating shot from half court that declared victory for Team Hawkins and stunned Team Cloud, 113-110.

Team Hawkins trailed Team Cloud 110-107 when Kelsey Mitchell hit a three-pointer with 4.8 seconds remaining to even the score. Then, with 2.2 seconds remaining, Mitchell inbounded the ball to Kalani Brown who made a quick pass to Colson.

Colson, who matched her season-high with 20 points, let it go with a second remaining and watched the shot fall.

“We really didn’t have a great plan. We were honestly just going to get it in and try to get a shot up. But we knew they were going to try to stop us from going that way (towards the net),” Colson said. “It was good awareness by Lani, honestly, to give it to me and then I just heaved it.”

‼️ FOR THE WIN ‼️@SydJColson hits the half court shot as the buzzer goes off to win in OT 😱#SCTop10 | 📺: @CBSSportsNet pic.twitter.com/pRW0XjN4uY

For Team Hawkins, Mitchell led the way with 33 points. Mitchell and Colson were joined by three other players who also tallied double-digits: Destinee Walker (17), Tianna Hawkins (16) and Brown (17). Hawkins recorded her fourth consecutive double-double and seventh of the season.

The team shot a perfect 27-for-27 from the free throw line, matching the league season high.

“We had people that wasn’t necessarily on this piece of paper that was a game changer for us. Big shout outs to our bench, Toccara, Shannon, Marj (Marjorie), everybody, Tina. I think they came through clutch,” Mitchell said. “As far as Essence and Shelley P (Patterson) just kinda been that listening ear to keep our wheels turning as far as where we need to be even though fatigue had settled in.

“Our bench was the glue to everything we did. At times like this you kinda just gotta lean on your people”

Opposing captain Natasha Cloud recorded a season-high 33  points and recorded the most 3-pointers in a game with six.

Teammate DiJonai Carrington also recorded a season-high 41 points and 14 rebounds, and took the league-lead in steals with 31, including six in the game. She is the second player this season to have a 40-piece, joining Hawkins.

An offense-filled game began with the first quarter, which featured 14 lead changes and 10 ties, ended with Team Hawkins up by a basket, 36-34. Thirty-six points ties the season high of most points scored by a team in a quarter this season, while the 70-point quarter combined is the highest-scoring quarter this season.

Cloud and Carrington combined for nearly half of Team Cloud’s points in the first half, tallying 40 points. Team Cloud used a 10-0 run to create the largest lead of the game at 49-40. Team Hawkins worked its way within four points, 57-53, to end the second quarter. Both teams scored over 50% from the field throughout the first half, but the difference maker was turnovers as Team Cloud picked up 16 points off 13 turnovers from Team Hawkins.

Imani McGee-Stafford, who finished the game with eight points and eight rebounds, scored the final four points of the fourth quarter for Team Cloud to send the game into overtime, tied at 102.