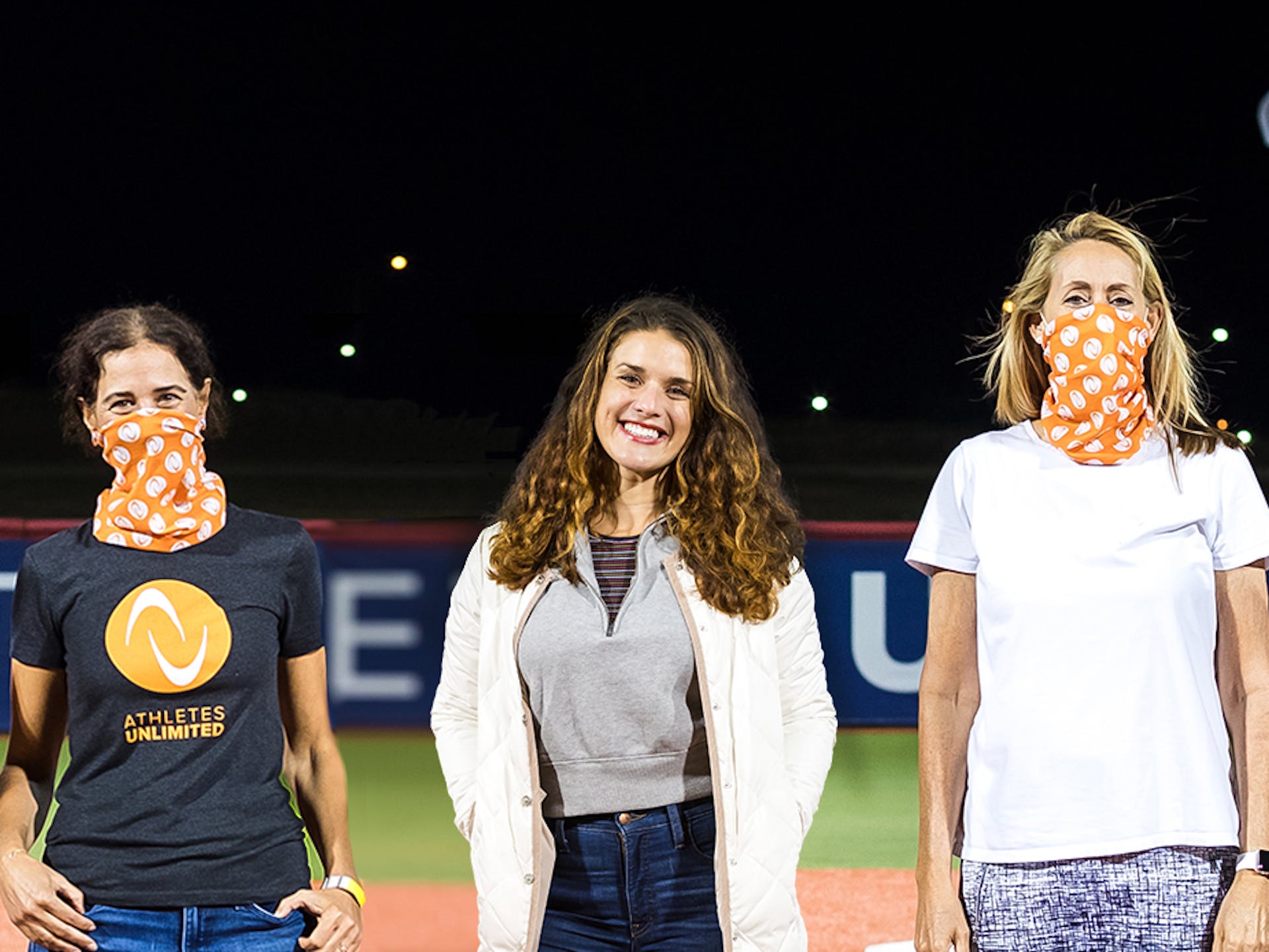 You don’t have to be an athlete to be a woman in sports. Across the sports industry women are becoming increasingly visible in all positions, from referees to league commissioners and general managers. Whether your passion is finances or creating content, there’s a place for you to make an impact. Take it from the women of Athletes Unlimited, who work passionately behind the scenes to make sports history. Here are their stories.

Looking for a new challenge, Drucker, who has a background in law and finance, applied to a nondescript job posting for Athletes Unlimited. She’d never worked in sports before, but was curious. “After the interview, I remember thinking, ‘I don’t know if this is going to work, it’s unusual,’” she said. But something in her intuition pushed her forward.

Drucker was also drawn to Athletes Unlimited’s mission. “I liked that it was geared toward something that’s more about the athletes themselves, and not just about the fans.”

Launching a league during a pandemic was not without its challenges, but Drucker said overcoming so many obstacles in real-time is what’s been so rewarding about her role. “When you have a group of people working for a common objective and everyone is pulling in the same direction it just makes it easier to overcome all those obstacles.”

As a woman working in sports for the first time in her career, Drucker says the learning curve has been her favorite part. “I found what I was looking for in this role, but I also found a lot of other things that I wasn’t expecting,” she said. “I have over 20 years of experience and sometimes it’s hard to keep learning once you’ve done a lot of things. On a personal level, I keep learning so much in this job. I’m doing a lot of new things that I haven’t done before.

Through her work as the president and commissioner of the National Pro Fastpitch league for 13 years, Kempf was a seasoned industry veteran by the time she joined Athletes Unlimited, having created a truly international professional league for fastpitch players and fans.

“I believe that women deserve and have earned a space in the sports entertainment area,” she said. It’s a belief she has dedicated her career to. “We are equally as entertaining and, given the same level of space, presence, promotion, coverage, we will hold our own.”

Her mission is to create opportunities for female athletes to excel in the sports they love while getting paid. “I don’t want them to have to have another job to support being a pro athlete,” she said.

For Kempf, Athletes Unlimited has been an opportunity to continue her vision. “Something that I will never forget is the joy that we were able to see and the thrill that we were able to watch those players experience during the six weeks we were there in Rosemont (Illinois).”

Seeing the success in real-time has been what Kempf called an “unexpected delight.” “I think we counted on being successful, but we couldn’t realistically have imagined how successful softball really was and how many people would embrace the new editions, the concept, the leaderboard,” she said.

Sometimes life’s big gambles pay off, which is what Alvarez experienced after saying yes, last minute, to speak on a panel at SXSW. If she hadn’t jumped on a flight to Austin with an open mind she might never have connected with Athletes Unlimited, but as it turns out her spur of the moment trip set off a chain reaction that led to her heading up all of the Athletes Unlimited Content.

“I was very interested in the mission of what they were building and how committed they were to telling the stories of these athletes and trying to learn from other leagues in the women’s sports space that haven’t been able to do,” Alvarez said.

As a former LPGA pro with a background in content development, working with everyone from the LPGA to the WHL, Alvarez was passionate about storytelling in the women’s space. She wanted to find an opportunity where she could shape a content strategy from the beginning, with fresh ideas and an athlete-centered approach.

That’s what she’s so proud of when it comes to Athletes Unlimited. “They are committed, they believe that these women have the ability to draw an audience,” she said.

Even though she came into Athletes Unlimited with strong experience in storytelling for women’s sports, she said she’s still learning something every day from the players, fans and Athletes Unlimited team. “We have a player racial equity group and diversity in storytelling came up a lot,” she said. “It was not something I think I’ve given a lot of thought to until players of color raised it. They pointed out where we could be better, we could avoid making mistakes that other companies have seen. That has enriched what we’ve been able to do because we’re mindful of it and what that means and how we represent all of our athletes.”

While Labaton didn’t set out to specifically work in sports, her long history of work around social change allowed her to see the ways in which Athletes Unlimited could have a broad and transformative positive impact. For her, it’s a chance to influence cultural norms and practices. “I loved the idea of highlighting athletic excellence and all the best aspects of competition while simultaneously building a values-driven company that can serve as a new model for what a sports property can look like,” she said.

“Sports has such a huge footprint in our culture. If you can influence and change the way people – both athletes and fans – experience professional sports it can have huge reverberations beyond sports in our society.”

As Athletes Unlimited has grown, Labaton has been instrumental in creating best practices and policies that raise the bar for how women in sport are treated.

“It’s incredibly gratifying to have the opportunity to step back and think about what the best policies for athletes in our league would be, and then to put them into practice” she said. “It’s not often one has the opportunity to identify best practices and then develop and implement them from the ground up.”

Prioritizing core personal and organizational values shapes her work, and in doing so shapes all of Athletes Unlimited, reverberating out to the rest of the sports industry. “Athletes Unlimited is just one company, but if we can model a different type of relationship with our athletes – one that is less instrumental and more about partnership, empowerment, and inclusivity – and build a company that reflects our values, then we can demonstrate this is something other companies can do also. We can lead by example.”

Dejuliis’ entry into a full-time career in sports was anything but straightforward. She started her career as a member of the Baltimore SWAT team, pivoted to being a school teacher, and in between found time to earn World Cup gold in lacrosse. What’s united all of her pursuit has been a desire to help others.

“I’m big into teaching,” she said, “…and super passionate about lacrosse.”

Those two passions led her to the founding of the Women’s Pro Lacrosse League. Starting your own league is no easy feat, especially for someone with the competitive spirit Dejuliis embodies.

“I’m most proud that we built something that had good support and a following, and people believed in it,” she said, looking back on what she’s accomplished in lacrosse so far as she prepares for the inaugural Athletes Unlimited Lacrosse season. “I’m proud of going from not knowing and taking a chance on the uncertainty. It was a success because we got it to a point where it gained some traction.”

DeJuliis has never been one to shy away from the hard work that takes place off the field to make the in-game magic happen for athletes. Through joining Athletes Unlimited she’s able to provide more resources to pro lacrosse athletes, improving their experience.

“There’s a whole team of people that are working hard toward things like creating the diversity and inclusion group to do right by the players. It’s all part of the puzzle. If we don’t have those pieces I don’t think we’d be as successful. This is a full team effort in every aspect,” she said.

For DeJuliis, this next part of her professional sports career is the most rewarding. “My heart is happy knowing these women are going to have an incredible opportunity to showcase their skills and be treated like a respected athlete,” she said.