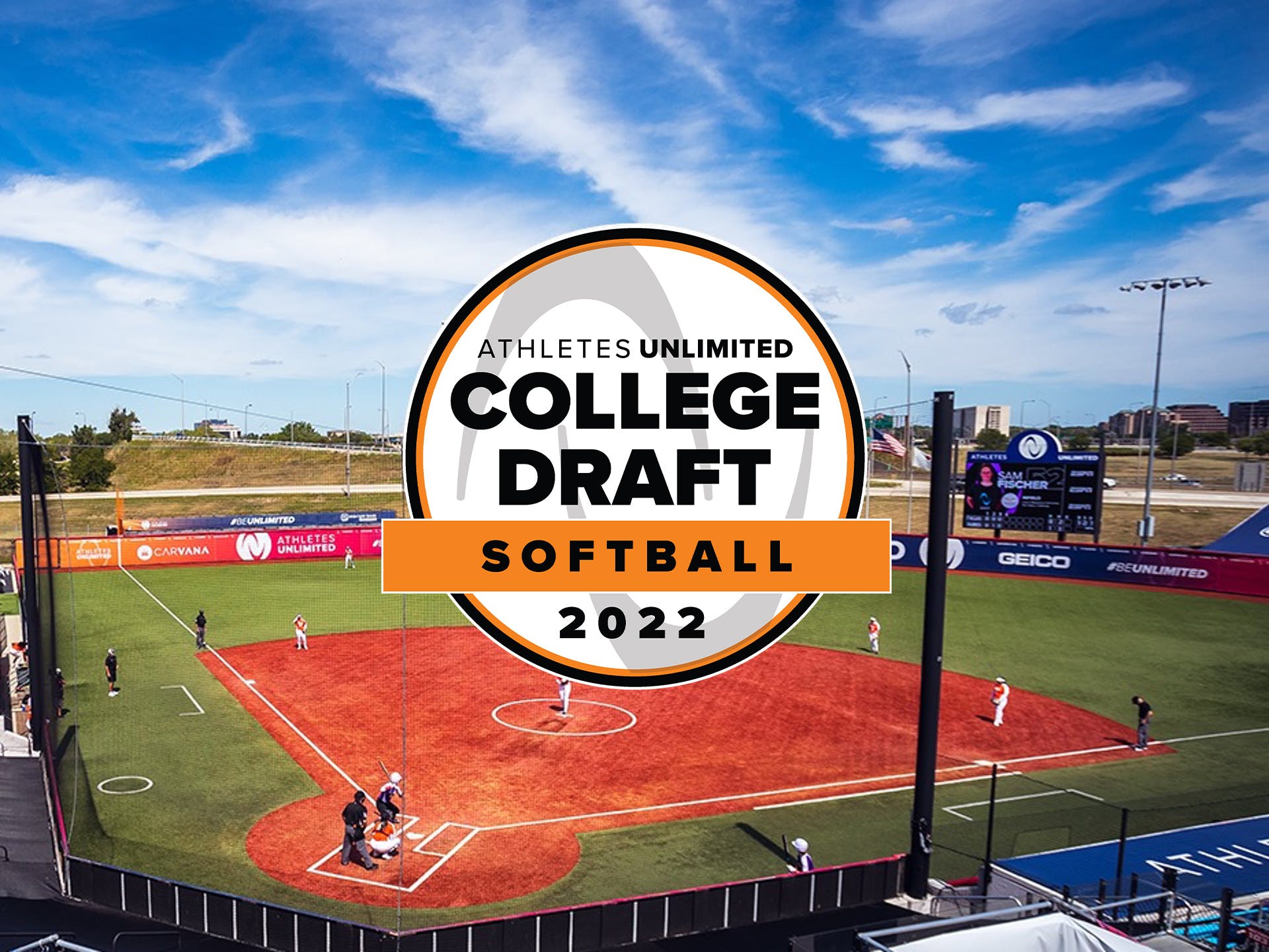 The summer of softball is quickly approaching for Athletes Unlimited, which means players will soon report for season 3 action.

Amongst those athletes will be members of the 2022 Softball Draft Class who will have the opportunity to make their professional debut at Parkway Bank Sports Complex in Rosemont, Illinois on June 29.

Last year, the league debuted a new tradition with the first-ever Athletes Unlimited Softball College Draft. This year the draft was held during the espnW Summit in New York on May 4.

Get familiar with the 13 athletes invited to compete in the 2022 Softball Season.

Alo is a heavy-hitter out of Oklahoma who has shattered one record after the other throughout her collegiate career, most notably when she became the all-time leading home run hitter in NCAA softball with 96 career homers.

Her name is etched in the 2021 record books for ranking first in:

She also had a 40-game hitting streak that went down as the second-longest streak in NCAA history and tied the NCAA record with seven consecutive games with a home run. As a result of her stellar season, she was named the 2021 USA Softball Collegiate Player of the year.

In her senior season, the utility player has started all 46 games for the Sooners. She has the best on-base percentage in the nation (.636) and trails in second for best batting average (.486).

Rochard became a staple in the Hokies pitching rotation in the 2021 season when she was named the 2021 NFCA First-Team All-American and ACC Pitcher of the Year. She started in 38 games and finished the season in the top 3 in the NCAA Division I for the second straight season in: strikeouts, shutouts and wins.

In her senior year run, she’s 22-2 in the circle with an ERA of 1.58. Across the NCAA, she’s fourth this season in the strikeouts category with 252.

Corrick is a pitcher for the USF Bulls who whizzes by batters and is recording rarely-seen career stats in her senior season. Corrick has gone out to throw 217 innings for South Florida and while in the circle has struck out 331 batters – 50 more than any other pitcher in Division I softball. She is a leader nationally in:

Corrick’s parents are both are from England, where Corrick was born before moving to the United States as an infant. She competed for Great Britain’s U19 softball team and led it to its first European fastpitch gold medal at the 2016 European Junior Championship in Spain.

A four-year starter for the Longhorns, senior Jefferson is a record-holding hitter for her university.

She started her career hot; as a freshman, she was deemed one of the “toughest players to strikeout” in NCAA Division I softball. She didn’t go down in the box until her 37th game and 133rd plate appearance. She finished the season with just seven K’s in her 218 plate appearances.

Her impressive batting streaks continued on – her sophomore year she reached base safely in 52-of-62 games played. In her junior season she led her squad in almost every offensive category:

This year she reached 300 career hits and became the only player in program history to reach the mark. She also earned a spot on the roster for the USA Softball Women’s National Team that will compete in the 2022 World Games, which will take place this July in Birmingham, Ala.

Gibson has been a contributor to her teams throughout her entire collegiate career. Before transferring to Arkansas, she had 58 starts as a freshman at Arizona State where she led the team in:

Since becoming a Razorback, she’s made history and set records. During her sophomore year, she tied the SEC record with four home runs in a game and became just the second softball player to hit for the home run cycle,  as well as the first to do it in four innings.

As a junior, she earned many accolades including NFCA Second Team All-American, All-SEC Second Team, and SEC All-Defensive Team as a first baseman. In her final bow as a Razorback, she leads her team with a .452 batting average through 44 games, recording 61 hits and 52 RBIs.

For the 𝙛𝙤𝙪𝙧𝙩𝙝 time this season, Gabbie Plain has been named Pac-12 Pitcher of the Week‼️

Plain enters her redshirt senior season coming off of a stellar year after being named the Pac-12 Pitcher of the Year in 2021.

She earned those honors after becoming second in Washington history in perfect games (2) and no-hitters (5) – one of which was the season opener. In 2022 she’s picked up where she left off throwing eight shutouts so far this year. She holds a 16-5 record posting 159 strikeouts and a 1.88 ERA. She’s also the first Husky in history to throw 100+ innings and allow under 100 hits.

Mia Davidson's 26th home run was one for the record books. pic.twitter.com/e0gqOoPGg6

Davidson is a star catcher that has set countless Mississippi State and SEC records. As a freshman, she made her name and university known in the softball world. She’s the only Bulldog freshman to start all 61 games and led the team in nine different offensive categories. She went on to earn Southeastern Conference freshman of the year

In 2019, Davidson broke the MSU and SEC single-season home run records; she hit 26 bombs, slugged .882, and threw out 12 runners from behind the plate. That year she was donned an NFCA Third Team All-American.

She’s continued her reign as a leader not only on her team but nationally as well. She currently ranks in the NCAA top 10 for:

Sherrill came out firing in her collegiate career, leading Seminoles Softball to their first NCAA championship in her break-out freshman year. Her freshman season is one of the best ever in Florida State history.

She hit 29 doubles on the season (leading the FSU and ACC records) which tied the NCAA single-season record. At the WCWS, she led the team smashing two home runs with seven RBI to earn a spot on the WCWS All-Tournament team.

After the 2021 season, the third baseman ranked:

Adams is an All-American and veteran second baseman for the Florida Gators. As a freshman, she became only the fourth freshman in program history to record a perfect 1.000 fielding percentage (the first freshman second baseman to complete the feat). She’s on her way to doing it again in 2022 – she currently boasts a perfect fielding percentage this season and has turned a team-leading 12 double plays.

In 2022, she boasts a .370 batting average. Adams hadn’t missed a game in her five-year career with the Gators up until she was injured against Ole Miss on April 15.

St. George is a member of Duke’s inaugural softball team and the first-ever commit to the program. The hurler has been a contributor to the Blue Devil’s pitching staff since her freshman year and was named to the All-ACC Freshman Team, joining Rachel Crabtree as the first two Blue Devils in program history to earn that honor. Her ERA led the program for two consecutive years and she went on to pitch and a program-record 199 strikeouts in her 2021 season.

While being a part of building a new program, St. George has collected individual accolades such as NFCA All-Region 3rd Team, ACC All-Tournament MVP, and All-ACC First Team.

Balint is a team captain for the Aztecs and leads on the field with her stellar pitching. She’s tied for eighth in SDSU records books for winning percentage (.680) in a single season. Through the 2022 season, she holds a 15-5 record with a 1.48 ERA through 151.1 innings pitched. She’s struck out 232 batters and walked only 33.

Prior to attending SDSU, Balint played her freshman and sophomore year at Oregon, where she went 28-4 in the circle with a 1.51 ERA, finishing a total of 13 complete games. She had a total of five shutouts, three saves, and 214 strikeouts against only 53 walks in 185 innings.

Balint was the only freshman of 34 finalists for the USA Softball Player of the Year award in 2017.

Iakopo started her career at Oregon but has dominated for the Texas Longhorns for the past three years. Throughout her collegiate career, the power hitter has hit 48 home runs – her highest during her junior campaign, leading the team with 16 long balls.  She also paced her squad in slugging percentage (.685), while rating second in total bases (102) and RBIs (45).

The catcher was featured on the USA Softball National Collegiate Player of the Year Top 50 Watch List in 2020 and 2021.

Iakopo has also competed internationally for the USA Junior National Team. In the summer of 2017, she played at the World Cup of Softball and the WBSC World Championship.

Lewis is a power hitter and second baseman for NU softball who has started every game since her freshman year for the Wildcats. She made history for her program becoming the all-time home run leader after knocking her 58th bomb on April 15 against Purdue.

She currently stands at No. 5 in home runs in the NCAA with 19 bombs registered in the 2022 season

During her 2021 season, she collected first-team All-Big Ten and Defensive All-Big Ten honors, leading the conference in stolen bases, swiping 30 bags in 32 attempts. She held team-highs in on-base percentage (.492) and OPS (1.098).

Aury Cruz selected No. 1 after strong performance in Week 4