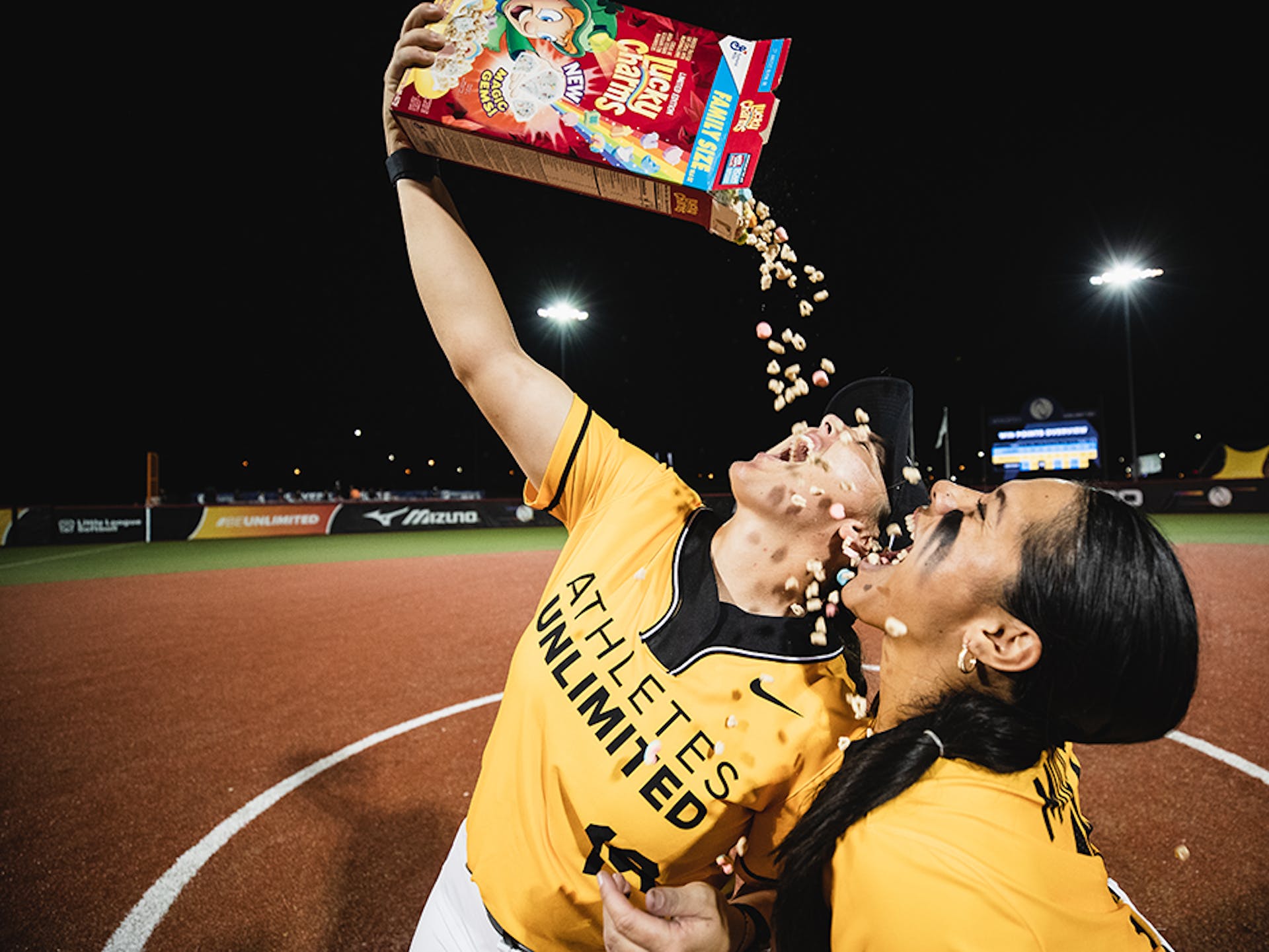 And the stories behind them

Jade Hewitt and Kait Devir photographed 138 games combined throughout 2022. Hewitt leads photography as a whole for Athletes Unlimited, while Devir joined the team for the lacrosse season.

Fans see the final product after the hundreds of thousands of photos are sorted through, hand-selected, and edited to be shared, but what about the stories behind them?

Hewitt and Devir take you through their favorite images of 2022 and share why they stand out amongst the rest. We took this photo in the middle of softball season in the visitor’s locker room. Natasha Cloud had come to experience Athletes Unlimited softball, and we had about an hour to shoot both photo and video of her, so there was a little bit of pressure! At the time, she was one of the only basketball athletes who had signed with AU, and in addition, she was the leader and face of the newly announced Athletes Unlimited Basketball league. It’s safe to say we were all really excited and slightly nervous to meet her.

Her energy as a person is unmatched and we all had such a positive and upbeat time photographing her. My favorite part of this image is the texture on her right cheek from the locker on the side. That’s one of those things that you don’t plan ahead of time, and discover as you’re shooting. The fact that it looks like a basketball net was by accident, but a total bonus! Basketball is not my home sport, so going into the first hoops season was a totally new experience for me. I knew one or two of the names in the league but didn’t have a good grasp of the other major players we had signed for the first season.

This photo was taken after a scrimmage within the first week, and I really didn’t know that all five of these athletes were heavy hitters! I put them all down on the baseline and had them walk towards me and told them to pick a pose while walking that made them feel comfortable.

Because the league was just starting and people were trying to figure out who Athletes Unlimited was, this photo found a lot of success online. I felt like it was a statement photo that set AU off with the right tone that we’re here to play. The moment this photo was taken was one of the most electrifying moments I’ve witnessed in sports. Sydney Colson hit a massive half-court buzzer beater and her celebration was a mixture of complete hilarity, passion, and excitement … all words that describe her.

I immediately ran up with my camera, and when she found me, she stuck to me like glue for a good twenty or thirty seconds. She kept yelling, “I’m really from there!” (there being Houston), while making the most intense face. This photo took off online, and I remember seeing it everywhere. And now it’s made its way onto merchandise coming soon!

What’s so cool about this photo is the actual moment itself. When season-changing moments like this happen, the content team collectively hits another gear. Moments like this require every part of the department to be functioning at their highest level: social, photo, video, and graphics. In the thirty minutes after the buzzer beater happened, the team pushed out edited photos and edited video in several social media posts. For those who aren’t familiar with social and content creation, that’s something that’s not easily done. The content team is so immensely talented and in moments like that, you can see why. 2022 was Danielle O’Toole‘s retirement season, which everyone knew going into the start of play. This photo was taken during one of her last games in week five, and it’s one of my favorite photographs I’ve ever taken of her.

Tooly is a calm, but firm soul. She’s intense, but not in a flashy way. When you pair her intimidating competitive personality with her fierce eyes, she’s quite the subject to capture.

In my opinion, this photo captures everything she is. She conveys so much through her eyes and expression and it’s clear that she has a fierce love for the game. While fun, smiley, bright photos are normally the go-to for athletes, this photo is Danielle O’Toole. This is how she played the game. It never fails in every softball season that Hannah Flippen is the subject of the most-fun photo! This photo was taken after a huge win by Team Mulipola (Gold) somewhere in the middle of the season. When someone on the team hit a home run, they would jog around the bases, then be handed a box of Lucky Charms when they touched home plate. The whole team would celebrate as the home run hitter water-falled Lucky Charms, and it was hilarious!

Softball really embraces the youthfulness and fun of the sport, more than the other three sports at Athletes Unlimited. They love using props to really buy-in to their weekly team, which makes it so much fun to photograph.

How could you look at this picture and not think sports are fun!? AUX Softball was new in 2022, and San Diego proved to be such an incredibly photogenic and beautiful location. The weather makes it a completely different experience than Chicago, and I really enjoyed capturing that during the three weeks of gameplay.

My favorite parts about this photo are the shadows of the palm trees and the specks of dust you see in the center of the image. I think this photograph really captured the warmth, fun, and uniqueness of AUX, and it’s one of my favorite images I took all year. A lot of editing went into this photo, but I’m so happy with the finished result. Unlike any other athlete that I’ve worked with, Sheilla’s fame spreads across the world. The content team knew going into season that her fanbase was huge, but her fans really blew us away once we started playing games.

This photo was taken during her retirement ceremony, and I remember knowing in that moment that the image was going to be special! When you add her emotional expression and the single tear rolling down her cheek, it really hits you in the feels. Of all the photos of 2022, I think this image found the most success online. I remember seeing it everywhere, across all platforms. It was also a really nice feeling to be able to give Sheilla a memorable moment from her last game at Athletes Unlimited. Pre-game portraits are one of my most favorite parts about gameday, and I try to rotate who I focus on so that as many athletes as possible have a portrait from season. However, Betty is one of the most powerful athletes I’ve worked with, so I can’t help but gravitate towards her on a regular basis.

This is one of my all-time favorite portraits! Shooting underneath the athlete gives them a hero look and, in my opinion, captures the athlete in all their greatness, strength, and power. And of course, Betty’s hair gives the image so much life and pop!

Betty is a combination of power, grace, and sweetness, and I think this portrait captures every side of her. There is no other athlete out there like Betty, in any sport, and the energy she gives off is so captivating and infectious. The Player Executive Committee (PEC) photoshoot is my favorite photoshoot of the year. We do a shoot in each season with each PEC with the goal of photographing the athletes as people, in regular clothes, looking like they do outside sports.

I was able to take our volleyball PEC to the back of a coffee shop in Dallas where there was a super cool, hollowed-out, old Volkswagen bus with really warm and comfortable colors. The individual pictures of each member came out so wonderful, but the group pictures were a lot of fun! Each athlete is so unique and special, and putting them all together really gets me emotional. The PECs do so much for their sport and for women’s sports in general, and I think they should be highlighted and celebrated.

All photos and captions by Kait Devir. Photographing Kelsey Huff‘s inaugural professional season was a special moment for me. Coming into season two of Athletes Unlimited Lacrosse, Kelsey and I had just wrapped up our spring season at the University of Southern California (USC). While it was my first semester and Kelsey’s last, I am grateful to have been on the same team with such an extraordinary teammate. I can never capture her fearless leadership, drive to win, and love for the game in a photo.

This photo was taken during week three of season two. I captured one of the many two-point goals that Kelsey had during her season. She might have been a rookie, but she never played like one. As more younger players have the opportunity to play pro, I am excited to see the sport’s growth at the next level and how it can change the game. Rain, night games, and lightning delays have become a norm for summer lacrosse with Athletes Unlimited. We don’t quit. The game goes on rain or shine. AU has reignited what it means to play professional women’s lacrosse. In moments like this, I am in awe of all the professional players in this league.

I will never forget a comment Britt Read made during my first season. The main subject of images is typically the goal scorer, not the goal saver. It is easier to focus on an attacker or a midfielder while shooting. Even at the most elite level, a goalie will not make the save every time. Britt challenged me during season one to capture those big-moment plays on the defensive side. I worked rigorously to ensure that when the last whistle is blown, and all players leave the complex, I get a photo for them to remember their impact on the game. Lacrosse is a sport that has brought me to my second family. The moments I have had on the field and will continue to have heading into my senior season cannot be put into words. I have so much adrenaline and energy photographing a sport I love.

In this moment, history was made. It was the celebration to tie up the game, sending Team Moreno (Gold) and Team Apuzzo (Blue) into the first-ever shootout. My favorite thing about this image is the excitement, passion, and intensity that rookies bring to the league. Scottie had just come off winning a national championship and was making an impact during her short time as a professional lacrosse player.