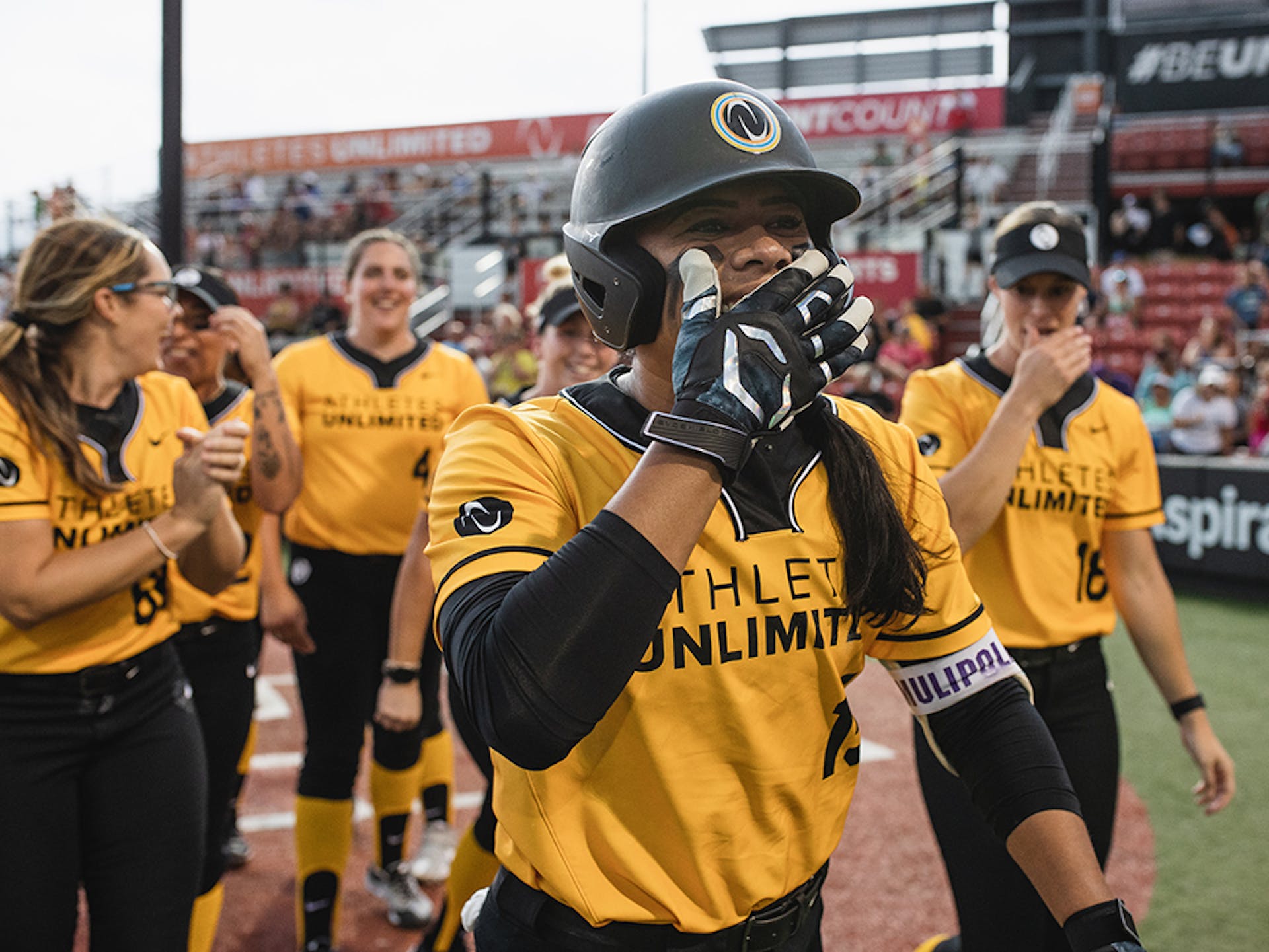 Dejah Mulipola shined as the gold team captain the last three weeks at the top of the leaderboard and in the final game of the season, gilded herself as the 2022 Athletes Unlimited Softball Champion.

Entering the final game of the season, Mulipola trailed pitcher Alyssa Denham by 184 points. Needing a big night at the plate and all the win points she could earn, Mulipola delivered. Batting second, Mulipola drilled a triple to right field (30 points) and was driven home by Sydney Romero, securing an inning win worth 10 points.

In the 6th inning, after being walked the previous two at-bats, Mulipola launched a solo shot to tie the single-season home run record and solidify her first-place crown.

In her swan song, Amanda Chidester completed her professional career with a two-run home run, but Team Mulipola held on to the 10-6 win.

The victory, plus MVP 1 honors, lifted Mulipola to No. 1 with 1,782 – 62 points ahead of Denham. It marked the first time in Athletes Unlimited history a position player has earned the title.

Her performance in the game was the ultimate testament to how she’s played all season. She concludes the year leading the league in the following statistical categories: batting average (.432), on-base percentage (.569), slugging percentage (1.182), home runs (9), RBIs (19), and stat points (632). She is the first-ever triple-crown winner in league history.

“My whole mantra growing up has just been to keep my head down in work,” Mulipola said. “The journey to get here has been unbelievable and nobody would know that. I know it, my family knows it and to be here, this gold medal means so much to me.”

Mulipola moved into captainship during Week 2 and became a staple reigning at No. 1 in the rankings. By the end of the season, she perfected drafting her teams through creating pitching staffs that worked well as a unit, and often picked the same players week after week to create a sense of routine and familiarity that can be hard to come by.

She’s played non-stop softball since AUX in San Diego where she finished third. She then competed at the World Games in Birmingham, Ala. winning gold with Team USA before coming to Rosemont, Ill. for her second season with Athletes Unlimited.

Season 3 marked the tightest conclusion in the rankings Athletes Unlimited Softball has seen in league history.

Coming in second overall on the leaderboard with 1,720 points, Denham’s fantastic finish reflects her as the best pitcher in the league, recording a perfect 6-0 record with two complete games and a shutout.

In a league that is dominated by explosive offensive moments, hitters averaged just a .217 average against Denham. She struck out 27 batters and her final ERA was a league-best 1.94.

Outfielder Haylie McCleney concludes her season third on the leaderboard with 1,650 total points.

McCleney was a two-time captain who had the ability to create teams with chemistry and buy-in that rallied around one another. Her leadership extended beyond her captainship and was backed up by her performance on the field.

She was one of the most elite hitters this season and ranked second in hits with 20 in 54 at-bats, including six doubles and two home runs, posting a .370 average.

Three-time captain Sahvanna Jaquish rounded out the top four on the leaderboard with 1,600 points. She had 18 hits, including four doubles, four home runs and a triple, and drove in 14 runs. She ranked second in walks (12) and on-base percentage (.559), and third in batting average (.409).

This season’s GEICO Defensive Player of the Year has one of the most smoothest and consistent gloves in the game. Hannah Flippen’s ability to dominate as a shortstop garnered her the 2022 award. Up the middle she recorded 30 assists, turned eight double plays, and had just a single error on 57 chances.

Rookie of the Year: Shannon Rhodes

After a year off from softball, Shannon Rhodes could not have made a more triumphant return to the sport. She took that time off to close the door on her career as a collegiate athlete in order to define who she wanted to be as a professional. Now, she’ll have 2022 Athletes Unlimited Rookie of the Year to add.

Rhodes joined the league for AUX  in San Diego and built on her debut to have one of the most successful seasons at the plate not only amongst the rookies but any athlete. She closes out second to Mulipola in home runs with eight bombs on the season. Rhodes hit .375, drove in 14 RBIs and finished second in slugging percentage with a .958.