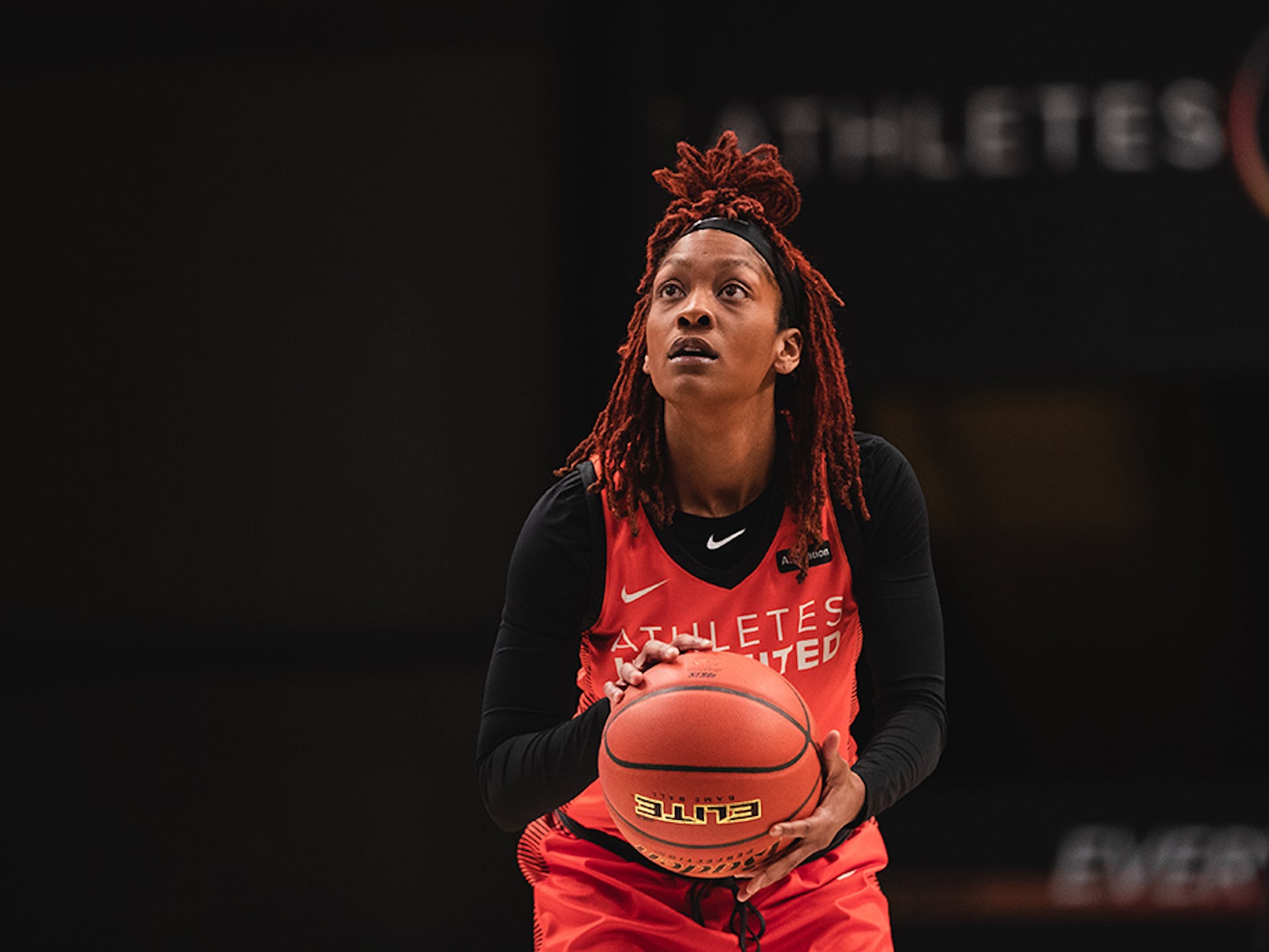 “I suffered, I learned, I changed.”

They’re tattooed upon her body, reminding her of what she’s gone through in life, and why it’s her faith that continues to guide her.

Bannister, who is set to return for her second season with Athletes Unlimited, appeared in 13 games off the bench during the inaugural season averaging 1.7 points and 0.7 rebounds per contest.

She finished 39th on the leaderboard with 2,125 points, including a season-high 278 points against Team Sims in the Week Four finale.

Overall, the numbers aren’t glaring, and she’s fine with that.

It’s the bonds and feeling of acceptance in the one world she’s always felt she belonged that got her emotional just speaking about a second trip through AU Hoops.

With her emotions already stirring one day in May, the tears went from sadness to joy when senior director of sports operations for Athletes Unlimited Kristen Miles called to see if she’d be interested in returning.

Miles informed Bannister, who was on her way to a wake, members of the Player Executive Committee were emphatic about having her back.

“Tasha (Cloud) was really one of those people, I feel like she really did see something in me that some people might have not seen,” said Bannister recently, via Zoom from Kosovo. “Tasha and Ty (Young) were talking about the way I carry myself and the way I treated everybody there. That’s one thing that they loved about me was my spirit and my energy. And that was the highlight of my summer because I wasn’t sure I would get invited back.”

Bannister will be one of the veterans when the play begins in Dallas next March.

Bannister spent time her college career at three different schools, much of her doing after a run-in with the law while playing at Florida. She started her career at North Carolina before transferring to Florida and finishing at East Carolina.

She produced some of her best numbers at ECU, where she saw action in 29 games with 19 starts and averaged 6.6 points and 1.8 rebounds for the Pirates.

But it would be an off-court incident while attending Florida that most remember Bannister for, and at times still hold against her according to the 5-foot-10 guard.

Bannister was charged with theft and fraudulent use of teammate Viktorija Dimaite’s credit card.

It’s not something Bannister makes excuses for or tries to talk circles around. It’s an event she certainly would rather forget, but at times is thankful she can’t as it serves as a reminder of mistakes she’s learned from.

“I just (made) a terrible mistake and I had to realize it’s not the end of the world,” she said. “I’m still human, I make mistakes. It seemed so bad at first because I was one of the top girls basketball players in the state of Florida and so a lot of people really knew me. They knew about me; they know about my dad (well-known coach Tony), and it looked really bad. One thing it really did for me was just show me I’m not exempt. Even the best of the best, do dumb (stuff) and the way we bounce back from it and the way we learn from it, that’s really what matters.”

With dreams and aspirations, like all little girls who grew up playing basketball, her dream was to play professionally.

But as her college career finished without the sizzle it probably would have if she was able to keep playing for the Gators, the credit card incident followed her.

She didn’t get a tryout with the WNBA, she suffered through rough experiences out of the country and muddled her way through a couple of stints in Portugal.

Overall, it wasn’t the life she hoped to lead, with suffering at the forefront.

The positive outlook for Bannister, in her eyes, was she knew she was an embattled young woman who had faced plenty of adversity.

I feel like I'm a much better person from anything that I've had to go through. I feel like I have more compassion and more grace and more favor towards people.
Antoinette Bannister

Be it injuries, losing her grandfather, battling through overweight issues, and coming out as a lesbian. The latter was the biggest battle and overcoming that continues to help her to this day whenever she feels she’s suffering. That was in 2019, well after so many other life-altering events sent Bannister through mental whirlwinds.

Then the initial call for AU tryouts came and she hesitated, saying she was close to no-showing for the trials.

“I know I’m good, but I didn’t think I was good enough for Athletes Unlimited,” she said.

Then, she didn’t make it.

She was going to take another crack at Mexico until Miles called to tell her there was an opening and asked if she was interested.

It was then everything she learned in life surfaced, and she began to see light in her soul.

Bannister considers herself a very humble person. Speaking to her, it’s easy to see.

She doesn’t ask for them, but she’s appreciative of opportunities and has learned how to capitalize on them when they’re thrown her way. Like showing up for trials for a women’s pro league when she’s invited.

Lessons learned in life are what helped her form bonds with women she’d only watched play in the WNBA and marveled over for so many years.

The opportunity, she felt was the turning point in her career considering she feels AU is the next best thing to play in the WNBA.

“The experience, the people, the love, the way AU took care of us, the way everything was handled – it was the best,” Bannister said. “Even while the WNBA was going on, AU was still promoting the girls that were in the WNBA. Even outside of basketball, AU cares a lot about the players. They care about us personally, mentally.”

Things like mental health workshops before they ever played a game, and ice-breaking meet-and-greets that got emotional for some, it showed Bannister that everyone is going through something, and there was a common bond between 44 of the greatest women basketball players who emerged on Las Vegas for the inaugural season.

“It was more than the money,” she added. “There was so much they gave us that didn’t deal with basketball. They gave us a lot of time to make sure we were okay mentally and emotionally.”

It was the type of change Bannister needed, particularly with her career.

Amazing what five weeks can do but evolving as an athlete and a woman after her incident at Florida, Bannister used her growth in previous years to change even further during her first season with Athletes Unlimited.

She’s always known losing anger issues and finding grace during interactions with others was a priority, but where could she showcase that when she hadn’t been given the one chance she was hoping for – an American pro league?

She played in Jacksonville for the WABA, a semi-pro league. But she wanted people she’s admired from afar – whether they knew her story or not – to learn about who she was both on and off the court.

AU was the avenue she needed.

“I feel like I’m a much better person from anything that I’ve had to go through,” Bannister said. “I feel like I have more compassion and more grace and more favor towards people.”

Bannister repeatedly mentioned having more grace with people, and that showing more love has been something she’s worn on her sleeve for quite some time, and was thrilled to share compassion with some of the greatest basketball players in the world.

W.G. Ramirez is a 35-year veteran sports reporter in Southern Nevada, serving as a correspondent for Athletes Unlimited.. Follow him on Twitter at @WillieGRamirez.

Our 2022 Softball Athletes & their causes