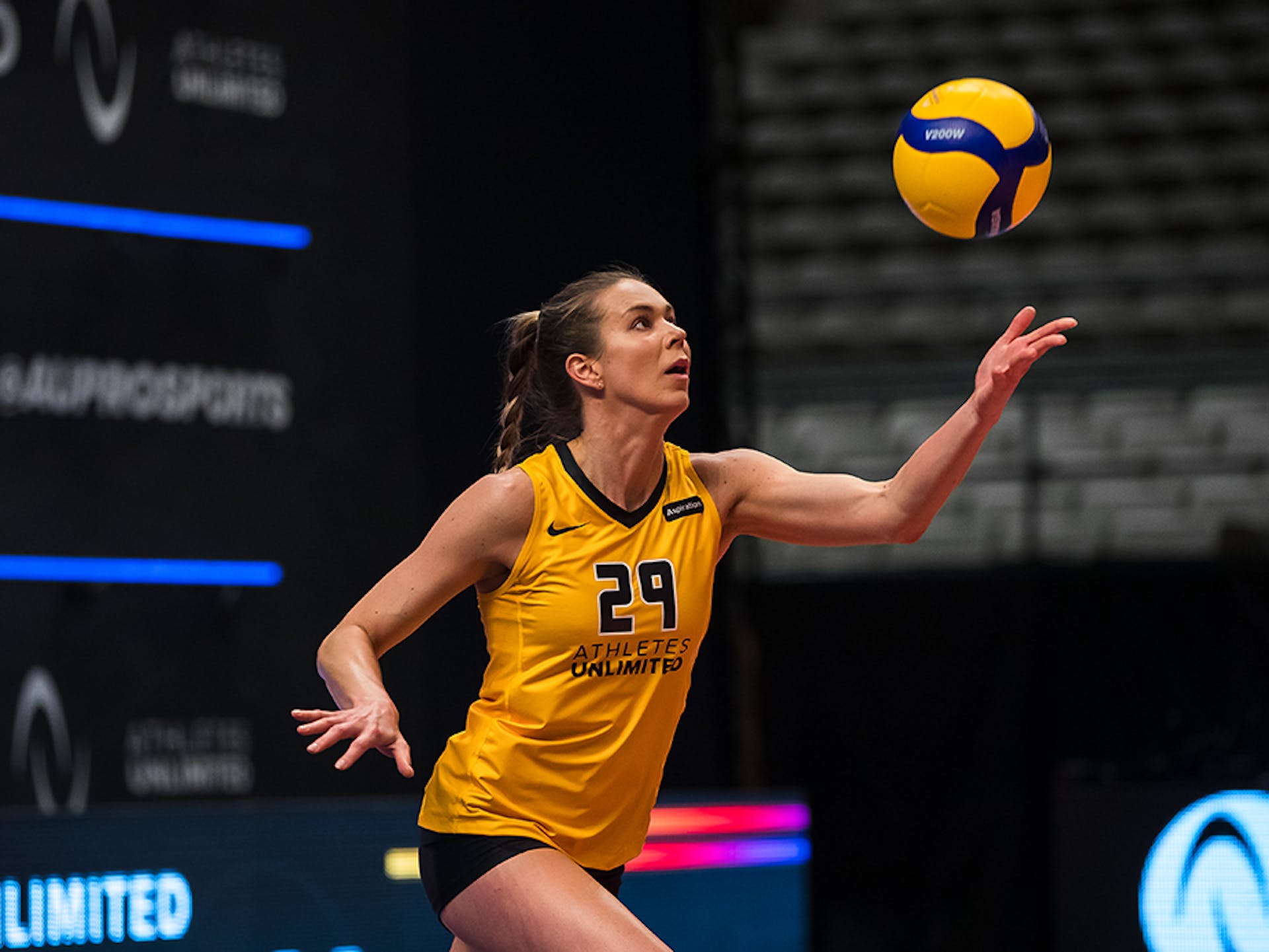 From the heart of the heartland to all corners of the earth, Lindsay Stalzer finally landed at home and is ready for her second season of Athletes Unlimited volleyball.

Stalzer, the pride of Peoria, Ill., and a 2016 inductee to her hometown Bradley University Athletics Hall of Fame, has played volleyball in 10 countries, including Finland, the Philippines, Indonesia and Switzerland.

Along the way, she immersed herself in different cultures, from dining on delicacies to learning at least some of the language in every country she visited.

Athletes Unlimited provides American volleyball stars a chance to play in the United States, so when Stalzer first heard about the opportunity to join AU, her curiosity was piqued.

“As soon as I heard a rumor there was going to be a professional league in the States, I was talking to my agent about it, and I was asking around about it because I always wanted to make that dream a reality,” she said. “I have had an amazing career overseas, but I always thought it would be amazing to be able to play in the USA in front of family and friends. I really haven’t  gotten to do that in my professional career. So this is a lot easier for my immediate family, my extended family. Some friends from college are going to come and watch. I’m super excited.”

During her first season with Athletes Unlimited, Stalzer came back from a bout with COVID-19 and appeared in 43 sets over 15 matches, finishing 12th on the leaderboard with 2,745 points.

“Last year, the competition was really high,” she said. “I just enjoy high-level volleyball, the intensity of it. I love playing it. I love the competition. Yeah, just the sheer level of volleyball was such a draw for me. I had played in Europe for many years and had been playing in Asia, which is —  at least where I was in Asia – fun, but the level of volleyball was not quite challenging me as much as I had hoped.

As is the case with the women who play Athletes Unlimited softball, lacrosse and basketball, Stalzer said she appreciates that the athletes have a say in all aspects of their experience with volleyball.

“I think that’s really cool that that’s such a focus here,” she said. “On other teams, they say, ‘Jump,’ and  you have to say, ‘How high?’ They kind of own you. I’ve been on teams where they didn’t even give you a schedule and tell us what time practice is until the night before. There’s not a lot of freedom.

“The fact that we have a lot more say is very cool. It’s just very empowering. It’s a very cool thing.”

The fact that we have a lot more say is very cool. It’s just very empowering. It’s a very cool thing.
Lindsay Stalzer

Of course, there’s a lot to like and a lot to experience when it comes to living and playing sports abroad. Stalzer jumped in with both feet, wherever she was playing. That included trying to communicate with the locals in their tongues. She joked that she learned at least something of every language of the countries she visited, even if she wasn’t quite fluent  and even if there was some “butchering” of the syntax.

“Languages like Tagalog (in the Philippines) are very difficult. Slovenia, I played there and heard that’s the second-toughest language to learn. You learn a lot of words, but ultimately, I would get lazy or just say, ‘I’m never going to use this language.’ For instance, in Switzerland, like in France, they speak French. I studied French in high school. I had a great vocabulary base, and that helped tremendously. So I would try to use my French in those places, and they loved it. They really appreciated that I tried. I know I probably didn’t get the accent down too great even though people would say I had a pretty good accent.

“They’re so appreciative of us just trying. We’re foreigners in their country. We should try to adapt to them.”

As favorite stops along her journey, Stalzer gave a slight nod to that famous “neutral” country.

“They all have a special place in my heart,” she said. “When you go to a new country, you don’t know what to expect, and there are different variables. For me, across the board, Switzerland was very high on a high level of volleyball and quality of living and organization and how the fans are and just how pretty the country is.

“So I always say Switzerland was my top, but Philippines is a lot of fun, and it’s so fun to travel in.”

Now that Season 2 of Athletes Unlimited volleyball has begun, Stalzer has some goals in mind. Chief among them is landing higher on the leaderboard at the end of the season.

“I think just to improve upon that,” she said of last season’s finish. “Last year it was a little bit tough coming off COVID that first week when we had scrimmages. My very first day coming back was the very first day of matches last year. So I think that was a very big obstacle to overcome. Hopefully that’s not an issue this year. Actually, it’s a goal of mine to be a captain at some point. So let’s go for that.”

As far as how long the 37-year-old Stalzer plans to keep her volleyball career going, she is keeping the door wide open. While at Bradley, she earned a degree in mechanical engineering.

“I’ve said this could be my last season at several different times,” she said. “The body is holding up and I still love it. So … who knows?

The journey has been a long, but rewarding, one for Stalzer, with many miles logged and many volleyball matches played. How does she sum up the ride?

“It just reminds me of the speech I gave at my Hall of Fame induction at Bradley,” she said. “I said at a couple different points never in a million years, first of all, did I think I would play volleyball in college and then never in a million years did I think I would play professional volleyball, not to mention overseas 14 years and make this career and this crazy life out of it. It goes to show: dream big and go for it.”