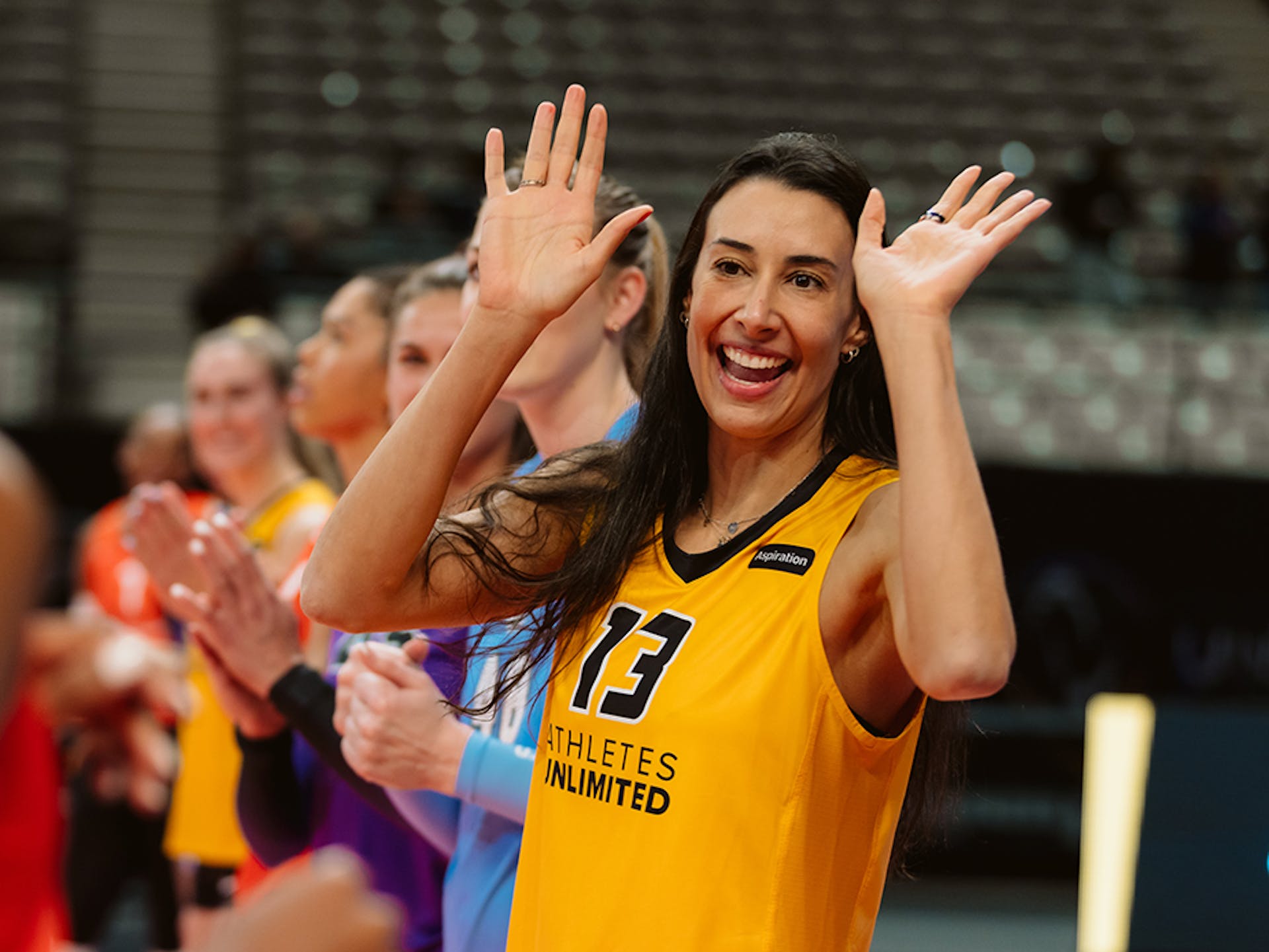 How do you summarize an athlete’s career? Or more specifically, for the greatest opposite hitter of her generation? You could start with ways to describe her.

But as Sheilla Castro closes the chapter of her life as a professional volleyball player there are two attributes she thinks about the most: hard worker and mother.

On April 9, Sheilla concludes her career, which spans over two decades. The reason she chose to end it with Athletes Unlimited goes back to one of those titles she’s focused on. She wanted her final game to be in front of her daughters.

Sheilla’s professional career started with Mackenzie Esporte Clube in 1997 in her hometown of Belo Horizonte, Brazil. Three years later, she made her debut with the Youth Brazilian National, winning the South American Championship in Medellín. This marked the start of a long career not only representing Brazil on the international stage – but winning.

To win is one thing. To be the best is another.

That’s not what Sheilla focuses on when she reflects on her career. It’s the process, and that’s what she wants her daughters to recognize as they grow older.

Fight for everything that you want...Put all you have on the process.
Sheilla Castro

When Sheilla was a young girl, she remembers her family’s praises. She did well in her studies and they would say, “She’s the best in school.” Once she started playing volleyball, she heard, “She’s the best athletically.” But what people don’t see and often don’t commend is the process.

The greatness Sheilla has achieved is not repeatable. She was asked by her Athletes Unlimited teammates what she reflects on as the reason for her success and what she hopes to pass on to her daughters Liz and Ninna. It’s not that they need to be the best – she wants them to know what it takes to excel.

In Sheilla’s list of priorities, volleyball has been at the top for a very long time. Above friends, relationships and family, volleyball trumped all.

“All my career volleyball was the first place in my life. For this, I think I’m successful,” Sheilla said.

She’s excited to shift around that priority list after her final match. There are people around her pushing for her to keep playing, to keep being one of the greatest. To Sheilla, that’s not the point. She’s ready to do something different.

“I don’t think there’s one player that would work harder than me inside or outside the court. So I [will] do this also now, in my new life.” Not only does she want to pour into Liz and Ninna, but Sheilla also wants to share what she’s learned in her career with others. She’s studying to be a high-performance mental strength coach and help others work to become mentally tough. There’s a unique mental strength that makes a two-time Olympic gold medalist and athlete who can play elite volleyball well into her 30s.

“If they value the process they will never be afraid of the result,” Sheilla said. “Everybody has their moment; their problems.”

If they value the process they will never be afraid of the result.
Sheilla Castro

For athletes who are struggling, she wants to coach the mental side of the game and maybe one day expand to people around the world. Moving on to this new season of her life means giving up the place she has worked out her own problems: the court.

She’s at peace with her decision to retire. She’s ready for new challenges, priorities and experiences. Despite what’s waiting ahead, it is not easy to leave behind what she only experiences through volleyball.

“When I have a problem, if I come to the court and practice, I will not remember my problems. This is the point. And this is the hardest part for me, for sure.”

'We have to be seen': Aleshia Ocasio uses platform to empower change