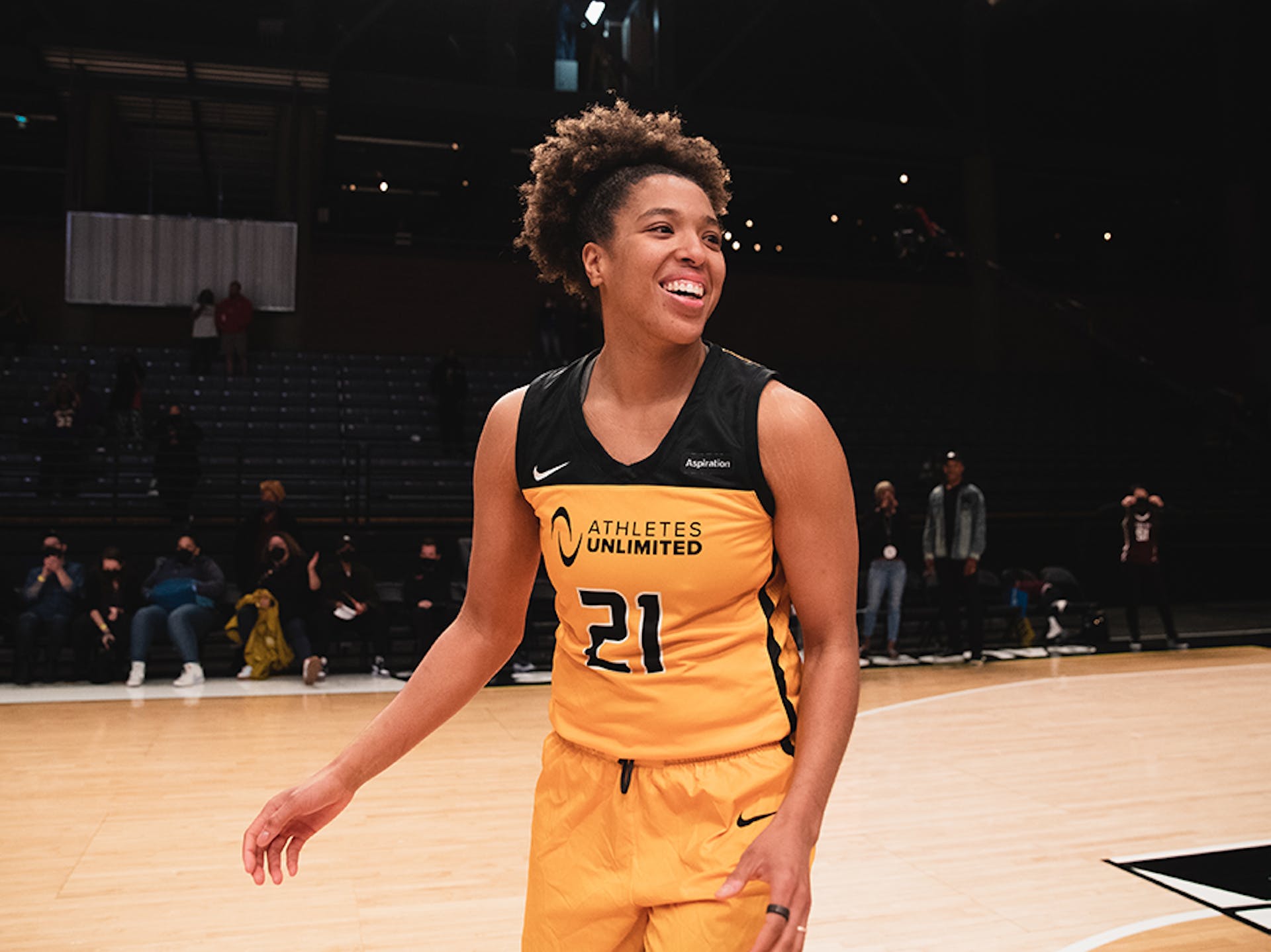 Entering Week 3 of Athletes Unlimited Basketball Tianna Hawkins took the No. 1 spot on the leaderboard.

She never looked back.

Hawkins finished the season with 6,836 points, becoming the inaugural Hoops Champion on Saturday evening, capping he season with a thrilling triple overtime victory – the first-ever in league history – as her team defeated Team Cloud, 116-11, in a battle to the finish. Hawkins posted 35 points and 18 boards.

Over the five weeks, she has cemented herself in Athletes Unlimited history books in more ways than one. She led the league in rebounds (166) and ranked second in points (357), and owns single-game records for points (43), leaderboard points (790) and field goals (19).

She also recorded a league-high 11 double-doubles. She tallied 500+ leaderboard points in seven games this season, more than any other player in the league.

The three-time captain of the gold squad led her teams to a 7-2 record. She led the league in stat points (3,336) and MVP points (750), earning MVP 1 honors six times, MVP 2 honors twice and MVP 3 honors three times.

Natasha Cloud finished the season ranked No. 2 on the leaderboard with 5,919 points overall – 917 points behind Hawkins. Cloud, who was an advocate for Hoops to be brought into the Athletes Unlimited network, recorded league single-game records in 3-pointers (6), free throws (16) and assists (15). She also holds the league record in assists (133) and registered the first-ever triple-double in league history ​​with 17 points, 10 rebounds and 10 assists on Feb. 12. It was also the first triple-double of Cloud’s career.

Securing the No. 3 spot with 5,373 points after Saturday’s finale is Isabelle Harrison. Despite her team’s loss earlier in the evening, Harrison added 254 leaderboard points as her team picked up two quarter wins in a 103-90 loss to Team Brown.

She was a four-time captain, joining Cloud as the only players this season to be a captain during four of the five weeks, and netted 275 points and 45 assists throughout the five weeks.

Harrison was also selected as the Defensive Player of the Year by the players, facilitators and members of the Unlimited Club. Harrison finished the season with 109 rebounds, 31 steals and 11 blocks. She will receive a medal and $5,000 bonus.

Lexie Brown, who captained the team that defeated Harrison, rounded out the top four on the leaderboard with 5,317 points. Brown recorded 210 points, 70 assists and 63 rebounds. She ranked second in steals, grabbing 38 from her opponents.

Brown, Harrison and Cloud are the only three players to remain in the top five spots of the leaderboard since the season began.

On Friday afternoon, Harrison and Brown were announced as part of the 2022 All-Defensive Team. In addition to Harrison, center Nikki Greene, forward Lauren Manis and guard DiJonai Carrington were also named to the team.

Greene ranked third in blocks (15), fourth in steals (27) and added 83 rebounds. Carrington led the league in steals with 41 and ranked second in rebounds with 123.

A new award to Athletes Unlimited for the Hoops season is the Sportsmanship Award, which is awarded to an individual player who exemplifies the attributes of good character, integrity and sportsmanship.

Receiving the 2022 Sportsmanship Award as voted on by players and facilitators was CC Andrews. When Andrews isn’t on the court, she can always be heard on the sidelines hyping up her team.

We heard y'all need an energy boost for tonight's games 😏

After a successful first season featuring 44 of the best basketball players in the world, Athletes Unlimited Basketball will return for Season 2 in 2023.

“We really did that. We all made this happen. From our co-founders, to our staff, to our facilitators, who were amazing for us, to the fans. I really don’t think we could have envisioned this being any better than it was,” Colson said. “So many players came here and rediscovered their love for the game. They showcased their talent and had opportunities to receive more basketball opportunities.

“I absolutely cannot wait for next season …  When we come back for season two, y’all, let’s make it just as memorable, and make every moment count.”