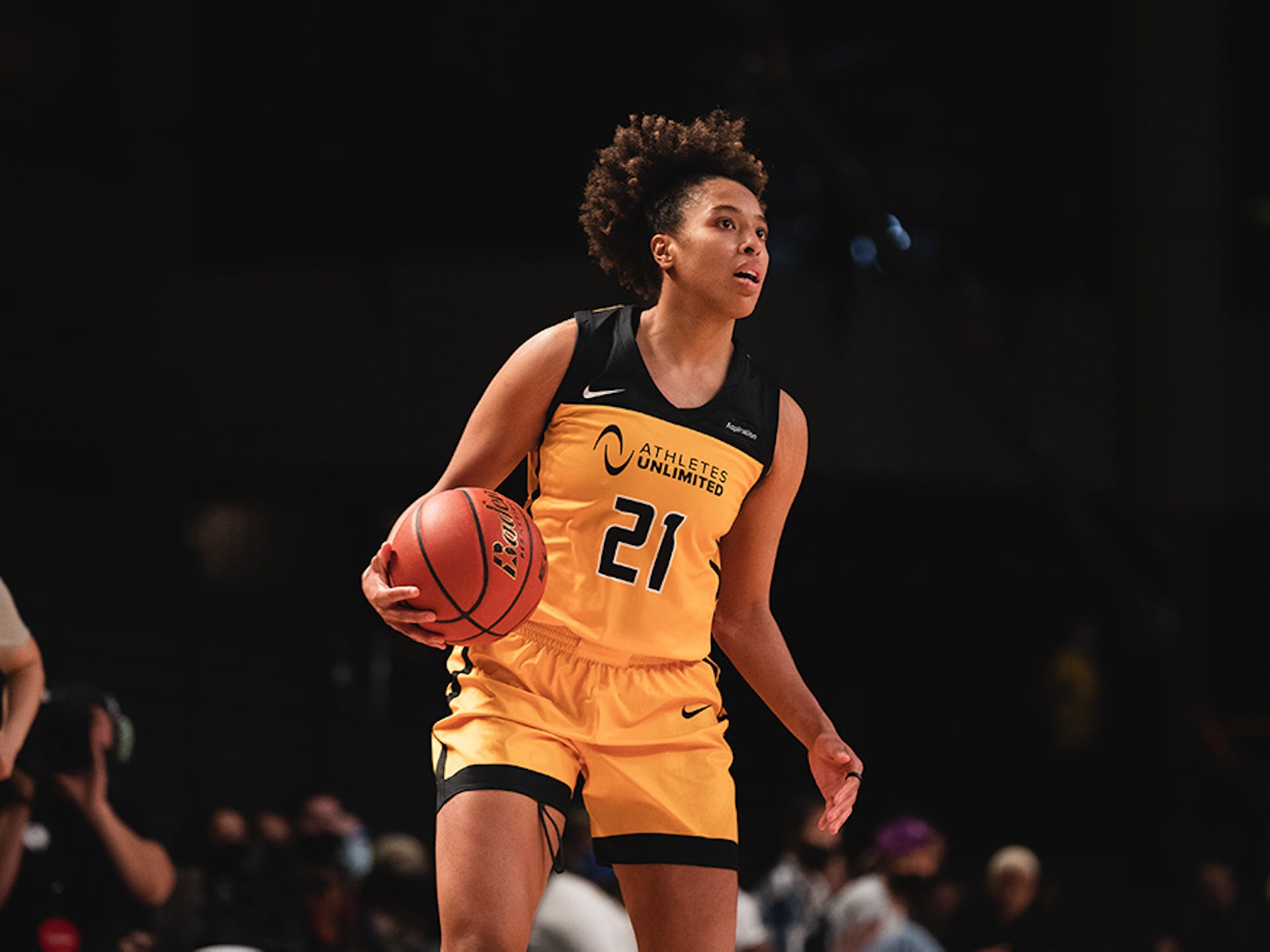 The Clinton, Md. native’s basketball journey began at the age of 12 on a grocery store-run with her mother, Latanya, and twin sister, Tierra. The trio had been approached by a local grassroots youth basketball coach who invited both Hawkins and her sister to play for the Hillcrest Community Center in Oxon Hill, Md.

“We were walking through the grocery store and a man came up to my mom and was like, ‘Wow, your girls are tall. How old are they?’” Hawkins recalled. “And when my mom told him, he was like, ‘I have a basketball practice, you should bring them down to try out.’”

“So, we get to the gym, and there’s a whole basketball game going on!” Hawkins said. “The coach was like, ‘Oh no, don’t worry about it. We’ve got your jerseys and basketball shorts. We just want you guys to go out there and have fun, just play. Run with your hands up.’”

Prior to that day, Hawkins and her sister had never played organized sports, but that experience served as the starting point of their basketball journey.

As a high school student-athlete at Riverdale Baptist, Hawkins admitted to not taking basketball seriously. The 6-foot-3 forward averaged 17 points and 11 rebounds in her senior year, receiving offers from schools like Delaware State, George Washington and Georgetown. But, it was the University of Maryland that would ultimately catch Hawkins’ attention.

“Maryland was really the only school that I saw play on TV,” Hawkins said. “I come from a time where we didn’t really see ourselves on TV as women playing basketball and competing. Maryland was a powerhouse school. They were always on TV, they were that good. So, I was like, if I’m gonna go to college, I want to be on a team that’s gonna be on TV so that people can see me.

“And I loved being at Maryland because it was down the street from my house. The XFINITY Center sits on the same street as my former high school. It was a no-brainer for me.”

Hawkins’ struggled her first two seasons playing at Maryland. Her college career “didn’t really take off” until her junior year, where she’d start in every game averaging 12 points and 9.1 rebounds per game, becoming a key contributor on an Elite 8 team.

While continuing her collegiate basketball career, Hawkins was also embarking on other passions. Having a close relationship with her grandfather, a former Washington, D.C. police officer and U.S. Marshal, motivated Hawkins to consider a career in law enforcement after college.

As a Criminology and Criminal Justice major, Hawkins had the opportunity to intern for the Secret Service.

“My junior year took off incredibly well, and people started noticing who I was. But I was still not caring too much [about basketball],” Hawkins said. “People knew who Tianna Hawkins was at that point, but I was on a team with Alyssa Thomas. And everyone knew that Maryland was Alyssa Thomas’ team.”

Hawkins would etch her name in history at the University of Maryland during her senior season, ranking seventh in single-season rebounds (331) and finished her career with 1,086, ranking fifth in program history.

It was then that she started to explore the possibility of a career in the WNBA, but would still apply for a job with the Secret Service as a backup plan.

On the night the Seattle Storm selected Hawkins sixth overall in the 2013 WNBA Draft, she found out that she also advanced to the next round in the application process to become a federal agent for the Secret Service.

“The day I got drafted, an investigator called me and was like, ‘We want to go ahead and push your paperwork through to the next step,’” Hawkins recalled. “And I told them, ‘Oh no! I’m about to get drafted [into the WNBA].’”

For Hawkins, being drafted into the WNBA was a “surreal experience.”

“I didn’t grow up watching basketball or having a favorite player. When I came into the league I didn’t know who anybody was to be honest,” Hawkins said. “I remember seeing Tina Thompson on draft night and not realizing who she was. I turned to someone and said, ’Dang, I wonder if that lady in the red lipstick is still in the league.’ And they said, ‘Tianna, that’s going to be your teammate!’”

In her rookie season, Hawkins admitted to leaning on then WNBA veterans Tanisha Wright and Camille Little for guidance as she adjusted to life as a pro basketball player, in an unfamiliar place that was far away from her hometown.

Then, in 2014 while playing overseas in Hungary during the off-season, she was traded to the Washington Mystics along with Bria Hartley for Crystal Langhorne.

A fitting homecoming for the DMV native.

After her second season in the WNBA, Hawkins was sidelined in 2015 for part of the season due to pregnancy, and because she was on her rookie contract at the time, only received half of her salary that year.

“I didn’t know how I would make ends meet, and I was preparing to have a kid,” Hawkins said.

As a result, Hawkins took up a part-time job working an IT help desk for the Maryland-National Capital Park and Planning Commission until she gave birth to her son, Emmanuel.

Six months after giving birth, Hawkins signed a contract to play overseas in France to prepare to make the Mystics roster that following season.

“I worked my ass off to get back in shape. When I was pregnant I gained 75 pounds and I didn’t snap back,” Hawkins said. “It took a year and a half for me to get back to my pre-baby weight. When I was pregnant people counted me out. They told me my basketball career was over and that there was no way I would be able to play and have a son. But I told myself that I was going to make it work.”

Players like Skylar Diggins-Smith, Bria Hartley and Dearica Hamby have all had similar experiences.

In 2020, the WNBA announced a new collective bargaining agreement with its players association, which guaranteed fully paid maternity leave, an annual childcare stipend of $5K, and more motherhood and family planning incentives.

In 2019, the Washington Mystics brought the first-ever championship to Washington, D.C. after defeating the Connecticut Sun in the WNBA Finals, a moment that Hawkins said she is the most proud of.

“Who else can say that they are from D.C., went to school in the area and brought the city its first championship? It’s something that I will never forget. It also speaks to my journey of never giving up and persevering through everything that was thrown at me.”

Last year, Hawkins tested the waters of free agency and signed with the Atlanta Dream but was waived after only playing one season for the franchise.

Hawkins recalled receiving the news about not returning to the Dream during a final exit interview with former interim head coach Darius Taylor.

“It didn’t really register to me that I had just gotten fired,” Hawkins said.

In a phone conversation with her agent, she was told the team was concerned about her skill level not being up to expectations and that the organization didn’t think her shooting would improve.

“I know I didn’t have my best year. It was by far the worst professional year I’ve ever had,” Hawkins said.

Hawkins’ dismissal from the Dream during the off-season made room for her to focus on developing her game and dedicating time to self-care.

Who else can say that they are from D.C., went to school in the area and brought the city its first championship? It’s something that I will never forget.
Tianna Hawkins

“Last year just took so much out of me. And then to have to go on social media and see people writing me off, it started affecting me really bad,” Hawkins said. “It got to a point where I was like, you know what, maybe I don’t need to play basketball.”

After having conversations with friends and family, Hawkins decided to take a three-month social media break and eventually signed with Athletes Unlimited after Sydney Colson reached out.

Through the first three weeks at AU, Hawkins has already put her naysayers on notice, setting two single-game scoring records in back-to-back games during Week 2 with 38 points (Game 11) and 46 points (Game 12). She sits in the No. 1 spot on the leaderboard with 4,644 points and leads the league in points (238) and rebounds (95). Those numbers average 23.8 points and 9.5 rebounds per game.

The WNBA champion is also returning back home to D.C. where it all started after signing with the Washington Mystics in free agency.

“A fighter is someone who would never give up. And I’m a true fighter. This is going to be a big year for me.”

Lavender logs a double-double; AU in the WNBA 4 Roundup