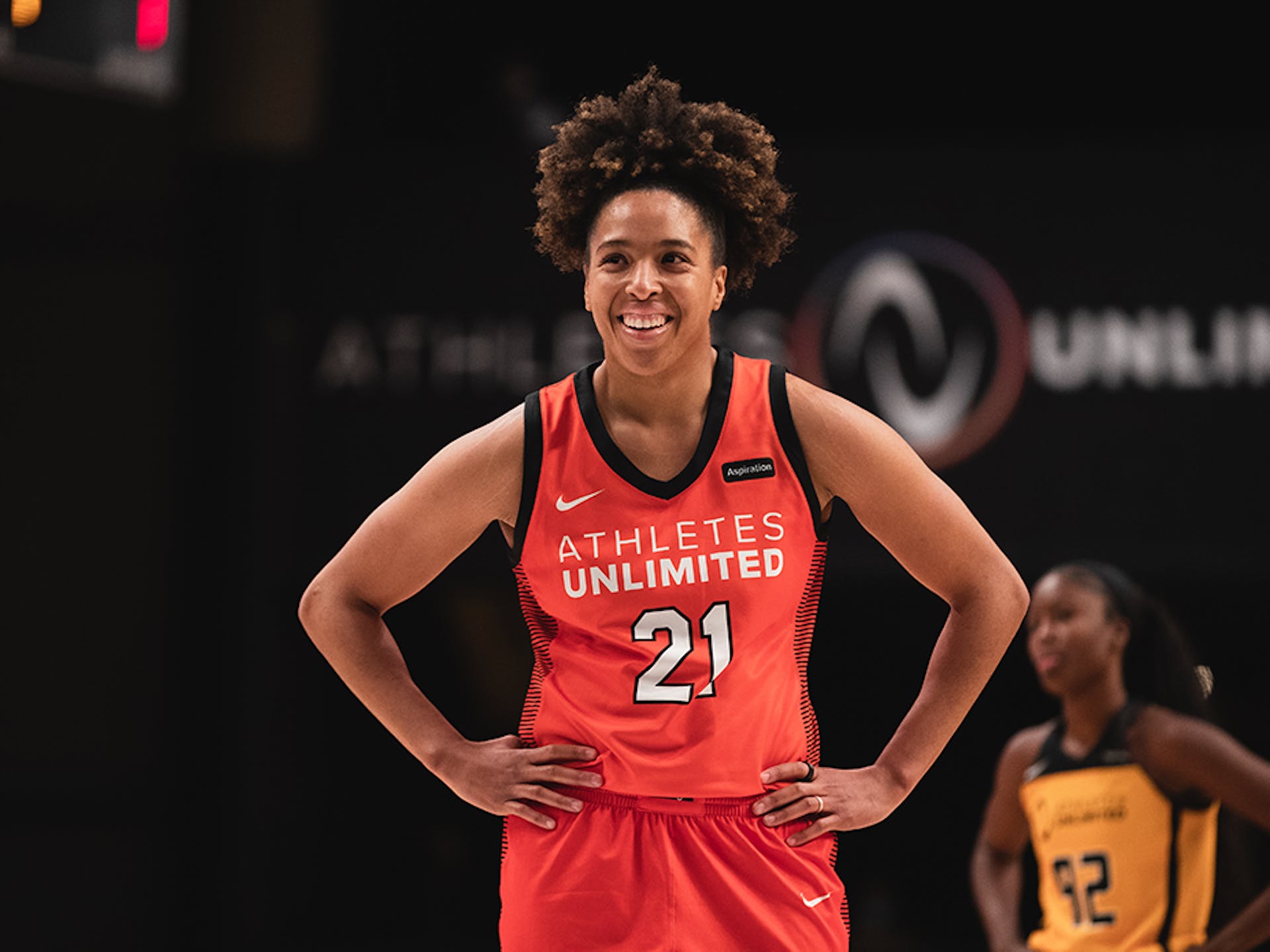 In each game during Week 2, she eclipsed that number by the third quarter, including Saturday.

Hawkins scored 46 points and grabbed 10 rebounds to lead Team Brown to a 97-84 victory over Team Cloud in what might have been the most anticipated matchup of the week.

“It’s just having the hot hand and my teammates did a good job of feeding me the ball both tonight and last night,” said Hawkins, who scored a combined 84 points on Friday and Saturday.

Hawkins finished 20 of 27 from the floor, including 3 of 6 from 3-point range on Saturday.

Essence Carson added 13 points, Lexie Brown scored 11 and Jessica Kuster chipped in with 10 to lead Team Brown, which shot 59.4% (41 of 69) from the floor and finished the week 3-0. Team Brown bested Team Harrison’s 58.2% shooting performance earlier in the evening, setting a new high mark by a team this season.

DiJonai Carrington scored 28 points to lead Team Cloud, which many believed were the favorites for Week 2 but finished 1-2 after suffering its second consecutive loss in as many days. Destinee Walker added 22, while Natasha Cloud had 15 points and 10 rebounds for her squad.

“For our team, defense is a big thing, and tonight for some reason we were not able to stop Tianna,” said Walker, who came off the bench to hit 9 of 12 for her season-high. “For me, it’s just important for me to be ready when my number is called and I’m happy I was able to get out there and contribute for my team.”

Team Brown wasted no time in establishing its offensive presence, as Hawkins carried over her hot hand from a 38-point performance on Friday by sparking a 12-4 run, along with Carson, as each had five during the spurt. But Team Cloud was quick to respond thanks to defensive steals and court-length drives by Lauren Manis and Carrington, cutting the lead to four. Hawkins then scored seven during a 9-5 run, as Team Brown opened a 21-13 edge. But Cloud came alive to score five during a 7-2 run to finish the first quarter and close the gap to three points.

The second quarter was essentially when Team Brown put the game away, outscoring Team Cloud 30-13 behind a scorching 72.2% shooting clinic, including 3 of 5 from 3-point range. Hawkins followed her 12-point first quarter with 14 in the second quarter, when she buried 6 of 9 from the field. Meanwhile, of the 13 points Team Cloud, only 10 were from field goals, as it shot a bleak 29.4% (5 of 17) from the floor.

Scoreless heading into the second half, Walker scored a league-record 18 points, the most in a quarter by any player this season. The problem from Team Cloud was the only other person to score for the team in the quarter was Cloud, who added eight points. Team Brown won the third quarter 29-26, with Hawkins continuing her record-setting night.

Team Cloud refused to back down despite falling behind by 26 in the third quarter, as it got within 11 late in the fourth, but couldn’t get any closer down the stretch.

“We played together this entire week and we came out 3-0,” Carson said. “Tianna did an amazing job. She not only shot the ball well from beyond the arc, she finished well around the basket. And anyone that really knows basketball, when you have a hot hand, you keep feeding that hot hand. And again she did a tremendous job.

“The entire team did a tremendous job of letting the game flow.”

NOTES: Hawkins, who set records for the single-game stats points record with 480, added 90 points by being named MVP 1. Her 820 points on the night marked the most points a player has earned in a single game in Athletes Unlimited Basketball history.

Earning MVP 2 (+60) and MVP 3  (+30) honors were Walker and Carrington, respectively. Team Cloud won the fourth quarter for 50 win points, while Team Brown took 150 win points from its won quarters, plus 100 win points for the game.

And so, another week is on the horizon. Stepping into the gold captain’s chair on Sunday afternoon will be Hawkins (gold) with 2,849 points. Brown will remain captain of the orange with 2,676 points. Cloud will take the No. 3 (blue) spot with 2,591 points and Isabelle Harrison will captain the purple squad with 2,387 points on the season.

Taj Cole dished out a season-high 11 assists in the win, a mark that ranks fourth in the league this season. … Brown, who reached double figures for the fifth time in six games, will don the orange jersey for the third consecutive week as captain once again. … Team Cloud guard/forward Ty Young received the first technical foul in league history with 6:26 remaining in the fourth quarter. … Cloud narrowly missed the first triple-double in league history, scoring 15 points with 10 rebounds and nine assists. … Walker tallied 18 of her 22 points in the third quarter, setting a league season-high for points by a player in a single quarter. … Team Cloud was called for just seven fouls, the fewest against a team in the league this season.

Deja McClendon expanded her horizons in the off-season