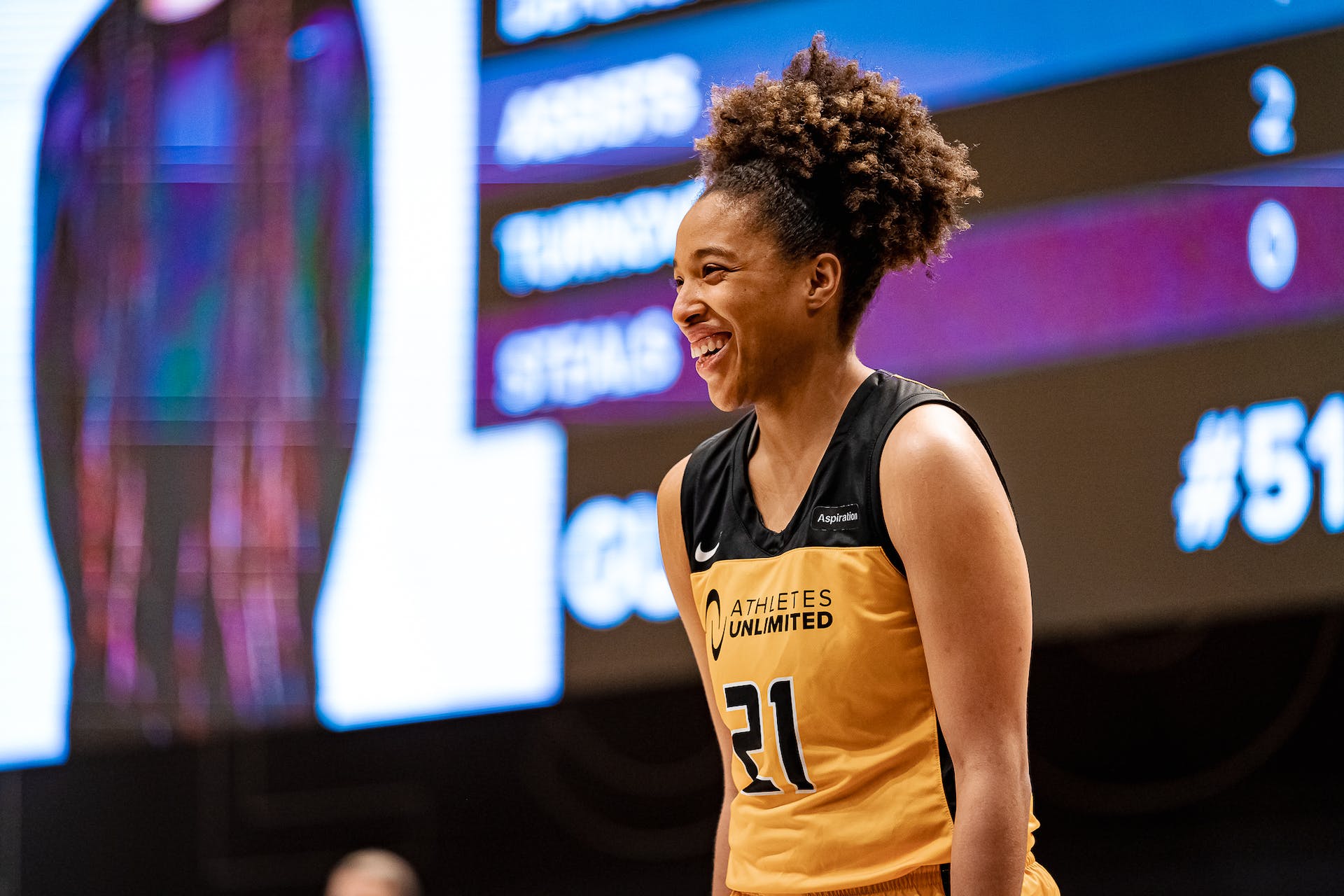 Like every week of Athletes Unlimited competition, the week begins at the draft but what’s different this week is our captain Tianna Hawkins has a sidekick.

Her 6-year-old son Emanuel has tagged along to Draft Day and quickly became the star of the show. He whispered picks in his mom’s ear but they were off the board before she could take his advice. He did, however, get to make the final pick of the draft for captain Natasha Cloud.

“It’s awesome having him out here, being around so many beautiful and powerful women. He’s a fan of the game, he loves it.”

That wasn’t always the case. At first, he was mad that he couldn’t come out to Las Vegas with her the entire time.

“He almost wouldn’t talk to me cause he wanted to come out and stay the whole time. Oh, but he’s happy now.”

As Emanuel heads back to school, his mom prepares for her final week at Athletes Unlimited while  at the top of the leaderboard.

Back with familiar faces

Captain Hawkins’ Week 5 team is a familiar one. The roster features five players from her Week Four squad: guards Kelsey Mitchell, Tina Roy, Marjorie Butler and Sydney Colson, as well as forward Danni McCray. For Hawkins, choosing repeat members to her team has allowed her to build chemistry and lean into knowledge of one another, playing off of each others familiar strengths.

Like most teams on Monday, Team Hawkins is using Monday as an opportunity to rest and will get back in the gym on Tuesday.

“So with us being in Week five, our bodies are kind of banged up a little bit. I told my team right after the draft that we were gonna take Monday off and just use Tuesday to put in plays and to play a little bit, to get us ready for the game on Wednesday.”

Wednesday night, Hawkins went out and got her sixth consecutive double-double. Hawkins and Mitchell each scored 20 points and the captain’s draft strategies showed through in their 80-70 victory over Team Brown. Familiar faces, balance and multiple options to score.

Not only did Hawkins put up a 20-piece, three other players on her team scored in double digits. Mitchell picked up 20 points herself, Colson scored 15 points and Air Hearn came off the bench to score 10 points.

“When you can get the ball going many different ways offensively, it’s not primarily the focus on one or two people, I think it makes the game easier,” Mitchell said.

All a part of Hawkins’ plan.

The familiarity Hawkins has established with over half of her team seems to afford her less pressure on practice days.

Thursday she chose to keep it light again for the group, focusing on getting treatment and resting. She used the time to talk game plan for Friday and wanted everyone to stay off their legs. When it comes to stepping away from basketball and escaping, Hawkins kept it real about how she likes to spend her free time.

“I’m gonna be honest with you – I get off my feet and I lay down,” she laughed. “I just lay down and just put my music on and just relax.”

Hawkins didn’t have much time for relaxing on Thursday though. After treatment, she headed to a photoshoot with the other members of the Player Executive Committee, which she serves on alongside Cloud, Colson, Ty Young and Jantel Lavender. The PEC represents their sport and works on all aspects of the league, such as reaching out to players to add to the roster, establishing protocols and building the athlete experience.

After the photoshoot, she headed back to the arena for a Special Olympics clinic. Athletes Unlimited players and athletes from Special Olympics Nevada got together for a couple of fun pick up games. Even on off days basketball seems to work its way back in.

Dynamic duos have been a staple of this season but as it has come down to the final games, Hawkins prioritizing team chemistry above all has paid off. She secured her sixth win as a captain on Friday evening overcoming Team Harrison, 85-74.

“My motivation and my intention is to go in and choose people that want to play as a team,” Hawkins said. “Playing as a team is gonna get you those wins… I’m big on team first.”

She truly has practiced what she preaches. She and Mitchell led the way for their team with 19 and 17 points, respectively, while Colson and McCray also pitched in double figures to the point total. Laurin Mincy and Rebecca Harris both put up eight.

Moreover, every single athlete on Team Hawkins got minutes on Friday night – this is not something we have seen often throughout the season. Everyone contributed and they remained 2-0 on the weekend. Hawkins extended her record leading teams to 6-2 on the season.

A champion is upon us

There’s an elephant in the room that it may be time to address: Hawkins sits atop the leaderboard and it doesn’t seem like she’s going to budge.

When asked if she’s taken a peak at the leaderboard lately, Hawkins says she likes to stay away from looking at the numbers.

“It’s funny you ask that because last week was the first week where I actually paid attention to the leaderboard and I felt myself kind of psyching myself out,” she said. “So I said going to it this week, I’m not gonna worry about the leaderboard and just go out there and play and have fun. I think that’s the best way to go.”

Heading in to the last night of AU games, Tianna Hawkins has a 652-point lead over 2nd place (Natasha Cloud).

For context, only 4 times (out of 609 player-game appearances) has a player earned 652+ AU points in one game, and three of them were Tianna (C. Williams the other).

Championship medal aside, Hawkins says she will come away from this experience a better ball player. If you’ve been able to see her compete in person, you won’t hear much from the forward on the floor but Athletes Unlimited has changed some of that through the challenge of being a captain.

“I always pride myself in my professionalism, leading by example, but I’m not the most vocal person,” Hawkins reflected. “This experience has forced me to step out of my comfort zone and be more vocal and to lead vocally as as opposed to just lead leading by example.”

If there were doubters of Hawkins before, she’s thrown it back at the naysayers this season. Record-setting performances; constant revere from her peers to be voted MVP; and leadership to form success teams week after week.

But above all, Hawkins has shown she can step up to new challenges and take them on like a champ.