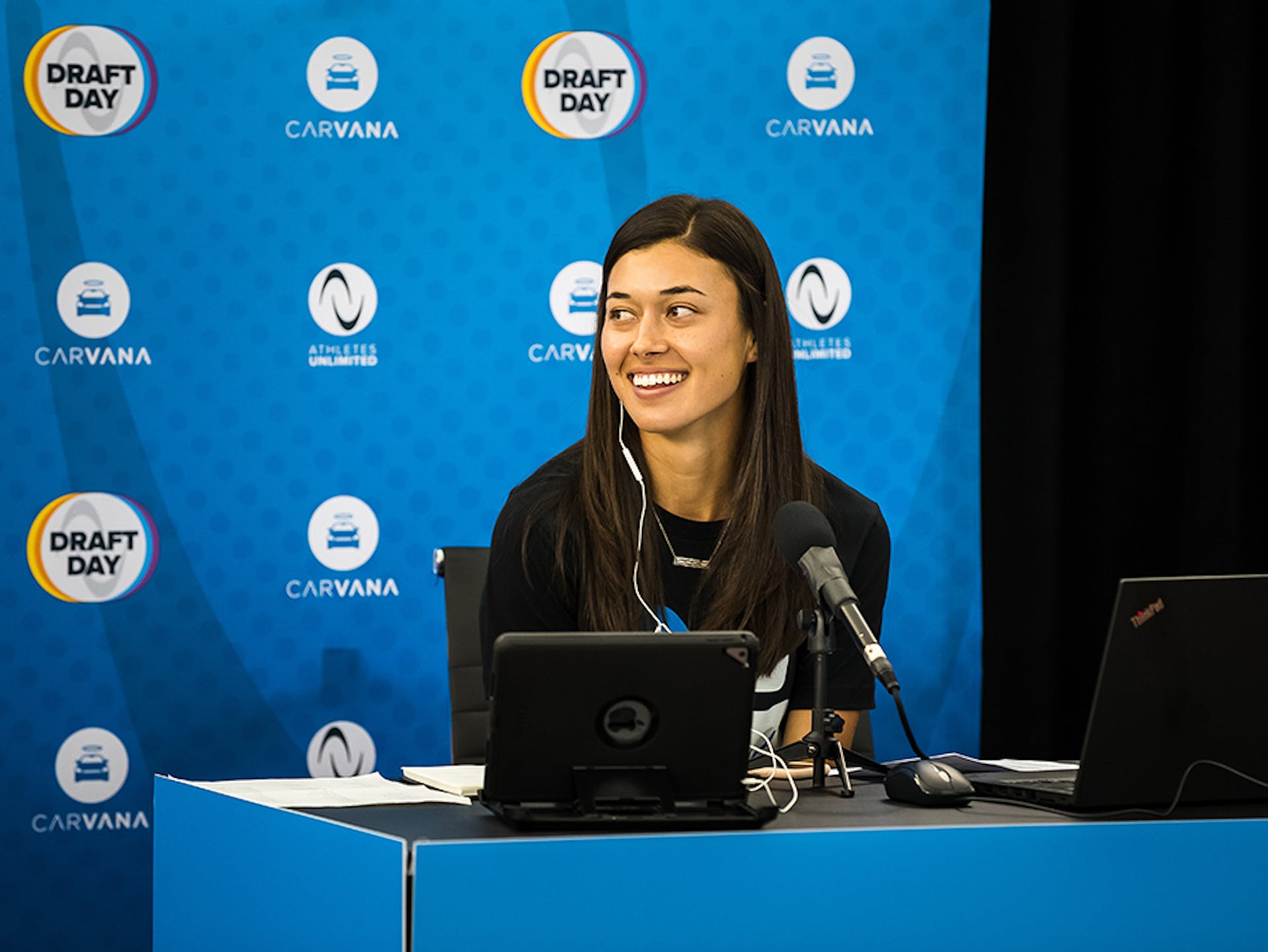 Svekis goes No. 1 overall for second week, while other teams focus on pitching

When Gwen Svekis steps to the plate for Athletes Unlimited softball, she’s greeted by the unmistakable notes of Metallica’s “Wherever I May Roam.”

As it turns out, Svekis is not roaming. She is staying right at home with Cat Osterman.

In perhaps the least surprising development in the short history of Athletes Unlimited, Team Gold captain Osterman chose Svekis with the No. 1 overall pick in Monday’s draft for Week 3 of competition, which begins Saturday in Rosemont.

Osterman, an iconic pitcher in all of women’s softball, made catcher Svekis the top overall pick for the second week in a row.

There’s even more recent history between the two. They were batterymates for Week 1 of play, when they teamed on a team captained by Jessie Warren. In two weeks of play, the teams featuring Osterman and Svekis are 6-0.

Familiarity was the watchword with the top two captains: Osterman and Aleshia Ocasio. Osterman selected three players she chose in last week’s draft: Svekis in Round 1, Sami Fagan in Round 12 and Arianna Williams in Round 13. On top of that, she chose four other players she played alongside in Week 1: Warren in Round 2, Victoria Hayward in Round 3, Aubrey Leach in Round 5 and Kelly Barnhill in Round 7.

Ocasio chose pitcher Haylie Wagner with the second overall pick in Round 1 and then chose catcher Erika Piancastelli in Round 2. Piancastelli was a third-round pick of Ocasio in Week 2, and was also in contention for a captain’s spot Monday. Ocasio, a pitcher, also selected Week 2 teammates Caleigh Clifton (Round 4) and Nadia Taylor (Round 8).

There were two new captains this week, based on their points totals from the first two weeks of Athletes Unlimited play.

Janie Reed, who had an inside-the-park home run Monday night, chose pitcher Danielle O’Toole with the third overall pick in the first round. Like Wagner, O’Toole has been a hard-working pitcher over the first two weeks of play. She has been a first-round pick in each of the first three drafts.

Captain DJ Sanders drafted fourth, and she chose Samantha Show in the Unlimited Category with her first pick. Show was a captain in Week 2.

Rounding out the second round was infielder Hannah Flippen, who went to Reed, and pitcher Jessica Burroughs, who went to Sanders.

Among the interesting tidbits from Week 3 included the Pendley sisters, Shelby and Nicole, being split up for the first time this season. Shelby went to Team Osterman in Round 8, and Nicole was taken by Team Ocasio in Round 10.

There are always sleepers and eye-openers in any draft. Sanders is a good example. She went from being an 11th round pick in each of the first two drafts to being a team captain for Week 3, based on her earning 370 points in Week 1 and jumping up to earn 530 in Week 2.

Morgan Howe, who hit a home run over the scoreboard at Parkway Bank Sports Complex in Rosemont this past weekend, went in Rounds 9 and 10, respectively over the first two weeks. She was taken by Team Ocasio in Round 7 this week.

Catcher Sahvanna Jaquish was a fifth-rounder in Week 1. She dropped to Round 7 in Week 2 before rebounding to be a fifth-round pick of Ocasio this week. Jaquish scored 170 points in Week 1 but exploded for 430 in the second week of play.

Haylie McCleney, who made a spectacular diving catch in right-center field in Monday night’s game for Team Osterman, apparently impressed Reed, who took her in the third round this week. Reed and McCleney were teammates this past weekend, and are also teammates on Team USA.