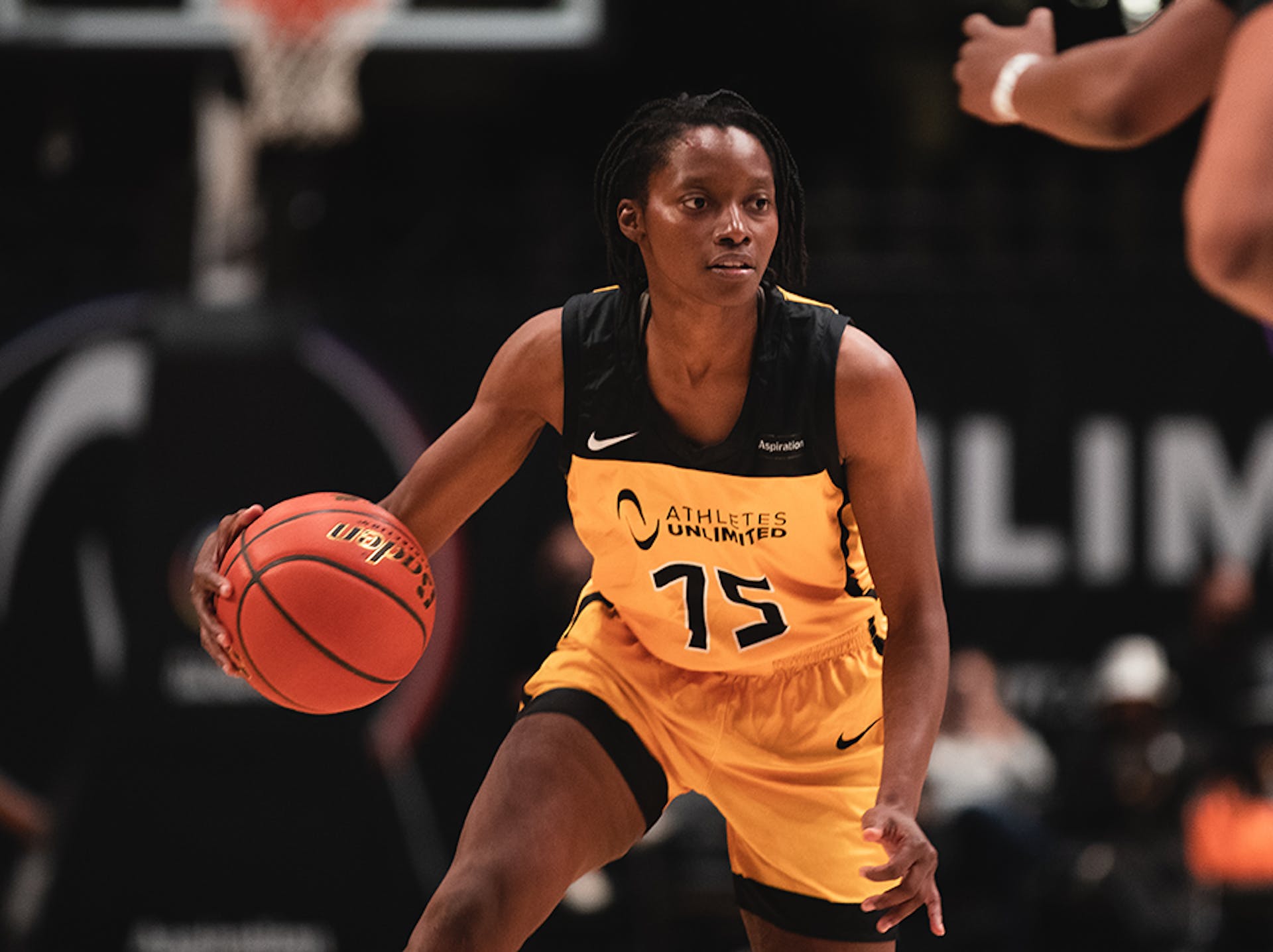 Find balance, and surround herself with the right supporting cast.

Hawkins and Kelsey Mitchell each scored 20 points and Team Hawkins to an 80-70 victory over Team Brown in Wednesday’s nightcap at Athletes Unlimited Arena.

“My plan going into this last draft was having good balance, and just being in a situation where one through five could score,” said Hawkins, who also grabbed 14 rebounds for her sixth consecutive double-double. “If teams wanted to take away someone, then we also have four other people that could score offensively.”

Sydney Colson scored 15 points and Air Hearn came off the bench to score 10 points and dish a season-high seven assists. Center Drew Edelman posted her second game with 10 or more rebounds after finishing with 13 rebounds.

Team Hawkins out-rebounded Team Brown by a 44-35 margin, including a 13-6 edge on the offensive glass to score nine second-chance points. Team Hawkins held a 36-32 edge in points in the paint and had a 15-8 advantage in points off turnovers.

Kalani Brown led Team Brown with a game-high 22 points, including 20 in the second half, and grabbed seven rebounds. Team captain Lexie Brown and Taj Cole each had 17 points. Cole served eight assists while Lexie Brown reached double figures in scoring for the 10th time in 13 games.

Team Hawkins won the first and second quarters, giving each player on the roster 100 points, including Hawkins, who sits atop the league leaderboard. Mitchell led Team Hawkins with 10 points, while Hawkins had eight points and nine rebounds over the first 20 minutes. But it wasn’t easy, as Team Brown’s Jessica Kuster gave Hawkins everything she could handle defensively.

Kuster said it helped that she had played with a few weeks in a row, and could predict some of the things she was going to do.

“We’re 20-plus games in and so people’s bodies are definitely a bit worn down and so I think a lot of it right now is just high-IQ basketball and playing a little bit more with our minds,” Kuster said. “T is a really high-IQ player and she can bruise if she needs to, but first she’s busy making the right reads.”

Unfortunately, Team Hawkins had its best shooting period to that point, hitting 11 of 22 (50%) from the floor in the third, with Hawkins scoring eight points in the quarter.

“When you can get the ball going many different ways offensively, it’s not primarily the focus on one or two people, I think it makes the game easier,” said Mitchell, who reached double figures in scoring for the ninth straight game and hit the 20-point plateau for the fourth time this year. “And when you go back on defense and you can rely on those same people, altogether it makes the game easier.”

KEY MOMENT: Team Hawkins took control of the game early, scoring 11 of the first 15 points to claim an 11-4 lead it did not relinquish. Team Hawkins led by as many as 15 points in the first half when Mitchell hit a 3-pointer with 5:15 left. Team Brown closed to within 46-43 on a Cole free throw with 5:41 remaining in the third quarter but was unable to get any closer.

NOTES: Hawkins was named MVP 1 for 90 additional points and finished with 514 on the night. Mitchell earned MVP 2 honors (+60) and accumulated 443 points, while Kalani Brown was named MVP 3 adding 30 points to her 369 point total.

Colson brings leadership, personality and basketball back to Las Vegas