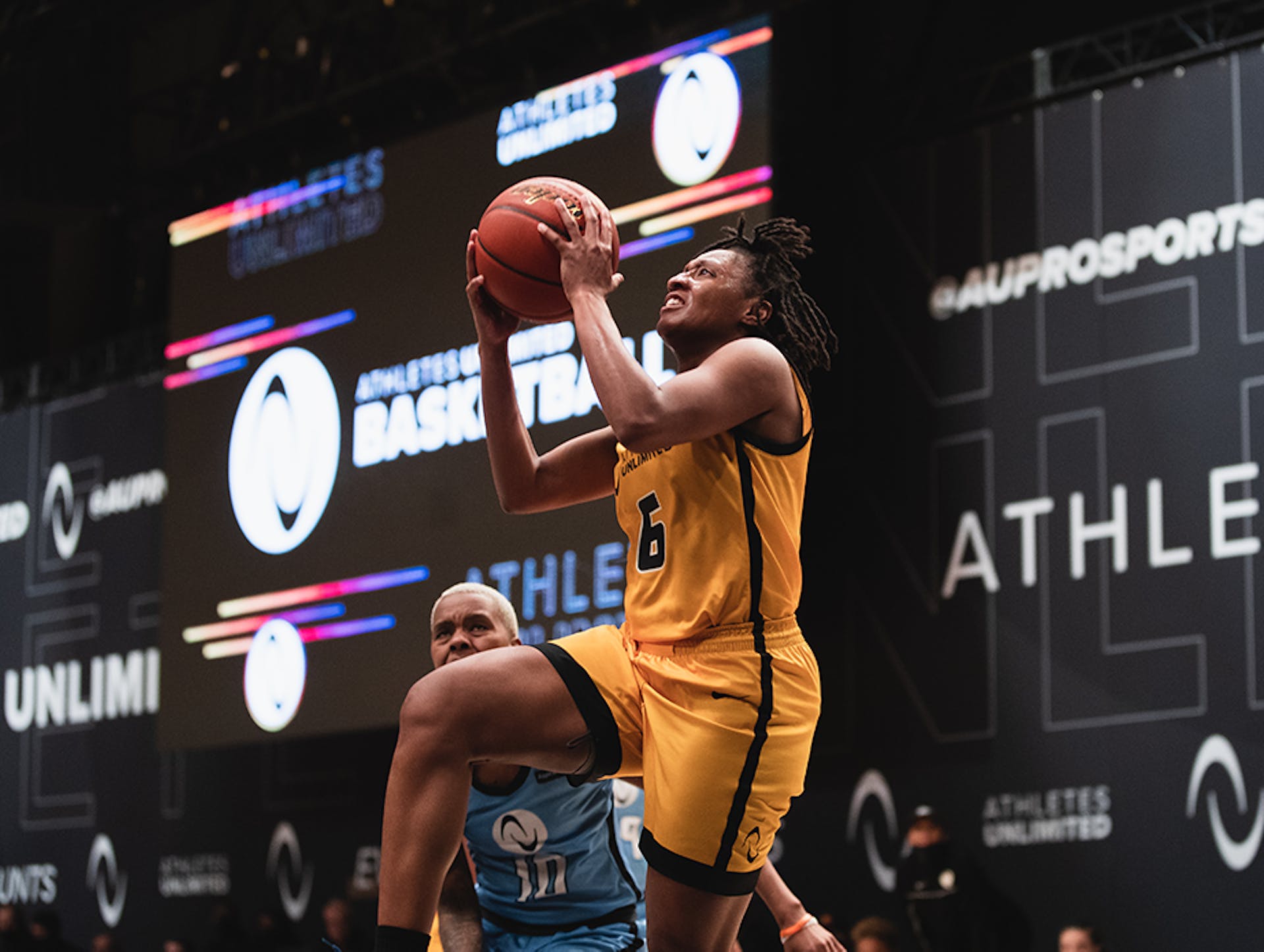 LAS VEGAS — The theme for the inaugural Athletes Unlimited Basketball season appears to have been “dynamic duo.”

Tianna Hawkins didn’t get the memo.

While other captains have assured themselves of aligning themselves with the same sidekick throughout the first five weeks, Hawkins has been big on building team chemistry.

Friday the chemistry helped Team Hawkins during a dominating third quarter when it hit 10 of 18 (55.6%) from the floor to pull away from Team Harrison and remain undefeated in Week 5.

Tianna Hawkins led the way, scoring 19 points and grabbing 13 rebounds to lead her squad to an 85-74 victory over Team Harrison.

It was Hawkins’ league-leading 10th double-double and seventh in a row.

“My motivation and my intention is to go in and choose people that want to play as a team,” said Hawkins, now 6-2 as a captain. “Playing as a team is gonna get you those wins. … I’m big on team first.”

Kelsey Mitchell scored 17 points, while veteran Sydney Colson registered her first double-double of the season with 13 points and 10 assists. Marjorie Butler chipped in with 11 points and seven rebounds and Danni McCray came off the bench to score 11 points en route to her third double-digit scoring performance of the season.

“I’m always a team player wherever I go, looking to get people open, put people in positions to be successful and we have a team that has some powerful weapons,” Colson said. “Kelsey, Tianna had really great games tonight, but we have other people who step up and do what we need them to do and people who accept roles.

“It’s easy to play on a team like this where we encourage one another.”

Team Harrison was led by captain Isabelle Harrison, who had a game-high 29 points. Harrison has scored in double figures in 12-of-14 games this season, including six games with 20 or more points. Odyssey Sims posted her 13th double-digit scoring effort, including her sixth game with 20 or more points, as she finished with 28 points, five rebounds and four assists. Courtney Williams added 10 points, reaching double figures in scoring for the seventh consecutive game.

Team Harrison wouldn’t go out without a fight, though, as it scored the first 13 points of the fourth quarter. It got within four with 6:54 left, but it wouldn’t be enough, as Team Hawkins held off the late rally for the win by closing the game on a 13-6 run.

“Basketball is a game of runs, there’s really nothing you can do about it,” Sims said. “It’s a very competitive league. From Week 1 to this final week, everybody plays hard for 40 minutes. That’s the beauty of AU.”

KEY MOMENT: Clinging to a 45-42 lead at the intermission, Team Hawkins burst out of the second half by scoring 21 of the first 27 points to extend its advantage to 66-50. Team Harrison trimmed the margin to 72-68 early in the fourth quarter before Team Hawkins closed out the game with a 12-4 run.

NOTES: Mitchell finished the night with 436 points after being named MVP 1 for an additional 90 points. Colson earned 60 points for MVP 2 and also earned 436 points in the game. Receiving 30 points for MVP 3 was Hawkins, who tallied 382 points.

Going into the final game day of the season on Saturday, Hawkins is 652 points ahead of Natasha Cloud on top of the leaderboard.

The teams combined to shoot 15-for-43 from three-point range, upping the league season total to 438 made three-pointers in 28 games this season. … Aspiration will plant 10 trees for every made three-pointer this season as part of its “Trees for Threes” initiative. … Hawkins enters the final day of the season in first place on the individual leaderboard with 6,321 points. Hawkins boasts a league-high nine game-MVP honors after receiving MVP 3 distinction on Friday night.