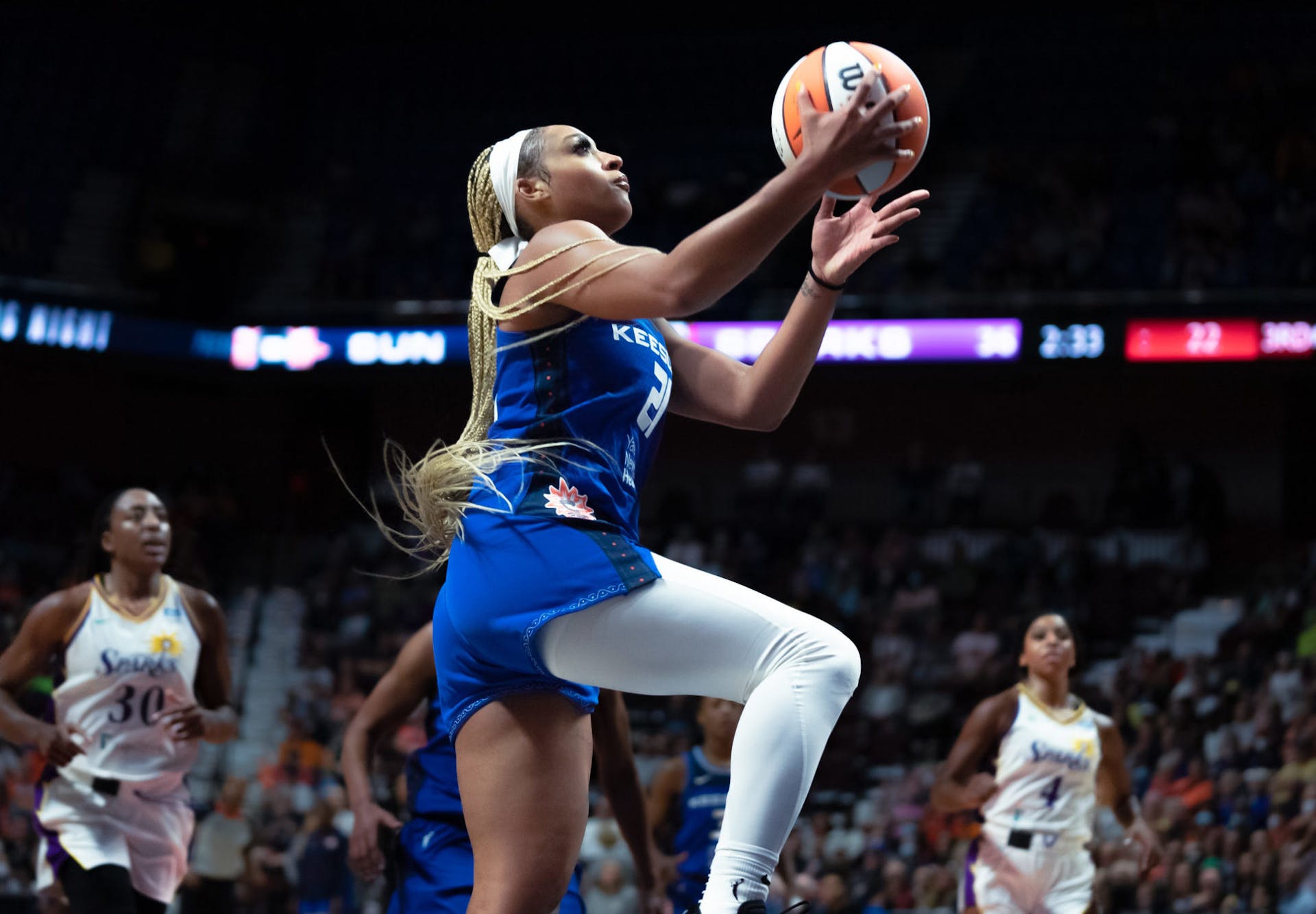 AU Hoops hopes you packed light because you’ll need room for the dubs picked up on this road trip.

Kelsey Mitchell and Isabelle Harrison both played key roles in achieving wins away from home court while the Athletes Unlimited in the W coverage ditched the Zoom rooms and took off to Mohegan Sun Arena to catch the Connecticut Sun’s home opener.

Here’s a deeper look into how the AU athletes faired in Week 2 of the WNBA season.

Connecticut and Carrington kick off at home on a high note

With two assumed starters out for the Sun, DiJonai Carrington rose to the occasion in Connecticut’s win to mark the franchise’s 20th anniversary season. The Sun overcame the Los Angeles Sparks, 77-60.

A key factor in the win: rebounding. Connecticut outrebounded the Sparks 45 to 21. Carrington had six of those boards as well as 13 points and three steals, logging over 30 minutes.

Tonight’s #AUHoops in the W matchup is IN PERSON! Opening night for the Connecticut Suns as they host the LA Sparks.

Sun head coach Curt Miller praised Carrington and talked about how he’s excited for what year two could look like for the guard.

“[She’s] tremendous in the open court when we can get her space going downhill you saw that she can really finish around the rim and be a factor,” Miller commented. “She plays hard, she’s a really good teammate and she’s determined to have a better season. She’s really coming with confidence.”

Carrington and Lexie Brown were matched up for a majority of the game, calling back to the five weeks where they went head to head in AU Hoops. Brown broke into the starting five for the first time for the Sparks.

Courtney Williams will suit up this week after serving her two-game suspension.

The Sun will head down the coast to take on the New York Liberty at Barclays Center on Tuesday at 7:00 p.m. ET. They’ll then play back-to-back matchups with the Indiana Fever on Friday and Sunday. Kelsey Mitchell and Fever win back to back

In their back-to-back wins over the Liberty and Lynx, Kelsey Mitchell led the team offensively with a 20-piece in each game.

She recorded 24 and 26 points against the Liberty and Minnesota, respectively, as well as showing major improvement from long range. She’s begun the season shooting higher than her career-best from three at 43.8%.

Week 3 of the 2022 WNBA will also mark a career milestone for Mitchell, who needs just 31 buckets to reach 2000 career points. It’s just a matter of which game she makes a guaranteed splash in.

This week the Fever are home against Atlanta on Tuesday, at Connecticut on Friday and return home to face Connecticut Sunday.

The Wings rallied against the undefeated Washington Mystics for the team’s largest comeback since 2016. They handed Washington their first loss, 94-86.

Isabella Harrison was a force in the frontcourt and recorded the first double-double of the season for both herself and the Wings.

Izzy B and the B is for buckets. pic.twitter.com/S5eoIivFOa

That wasn’t the end of their tear away from home. They headed north to defeat the Liberty, 81-71.  Harrison put up 18 points and six rebounds for the squad.

This week, they’ll see Washington again on Tuesday, followed by Phoenix (Thursday), and Minnesota (Saturday) for the first time this season.