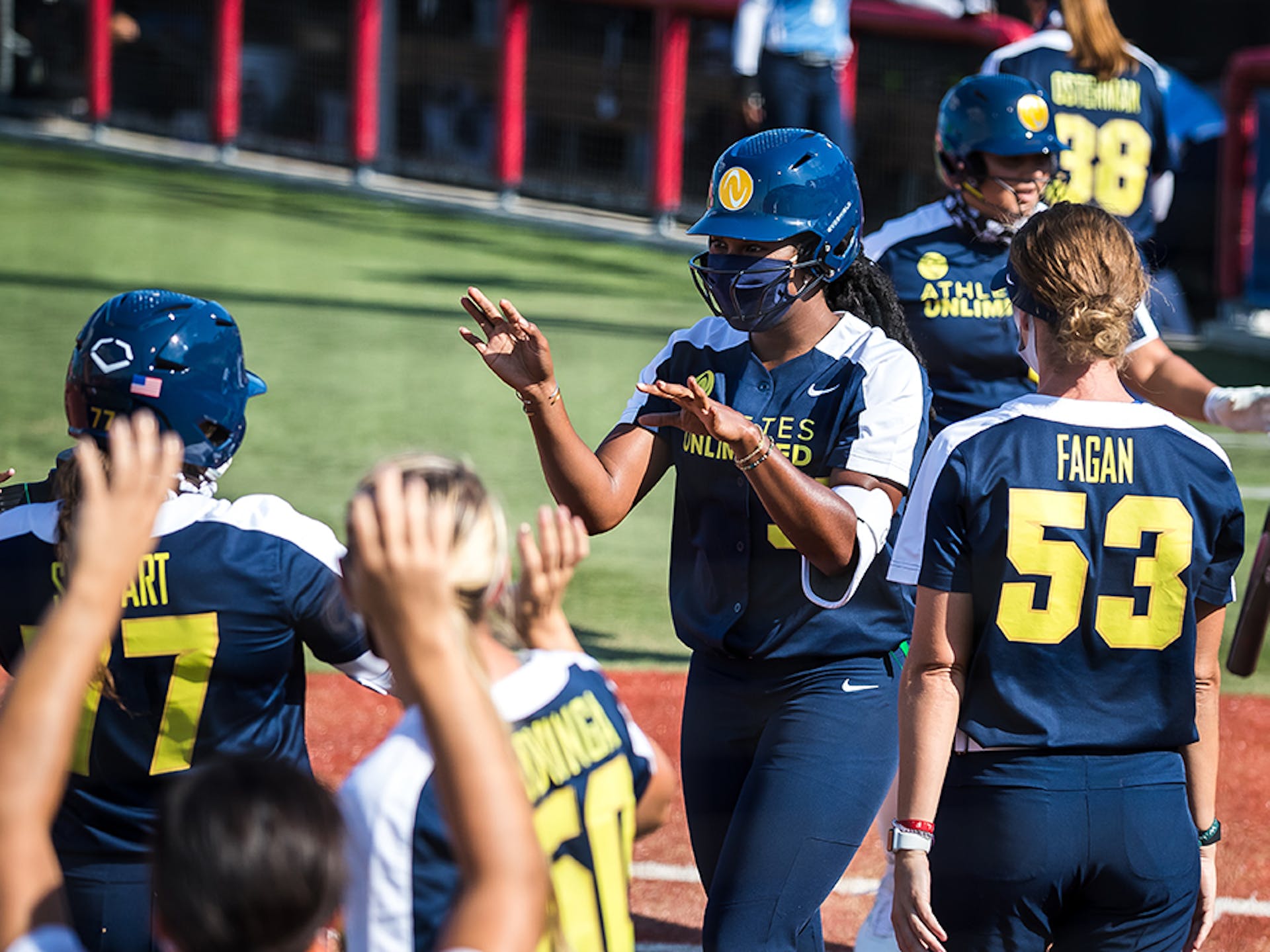 If Cat Osterman had to give up her first run of the Athletes Unlimited season and her first hit of Saturday, she might as well have done it in grand style.

The fact that captain Osterman’s Team Gold came away with a 5-2 victory over Team Blue (captain Victoria Hayward) had her smiling in the end.

Osterman was cruising and her team was leading 4-0 in the top of the fifth inning when Morgan Howe strode to the plate with one out. Howe proceeded to launch a booming, majestic home run to right-center field. The ball carried over the 36-foot-high scoreboard, taking the breath away from almost everybody at Parkway Bank Sports Complex and eliciting a little smile from Osterman herself, despite giving up the home run.

“If you’re going to get a good hit off of me, it might as well be solid,” said Osterman, who has won all three of her starts this season. “So I’ll tip my hat to Morgan Howe. But (that’s) not the way I want to give up my first run. At the same time, if you look back on the kind of runs I give up, that’s how I give ’em up.

Osterman was named the game’s MVP 2, finishing second to teammate DJ Sanders, who hit a two-run homer in the fourth inning to put her team up 4-0. Osterman, the overall points leader for the season, added 202 Saturday while Sanders tallied 200: 40 for the homer, 60 for the MVP and 100 for innings and win points.

Team Osterman put across single runs in each of the second and third innings. First baseman Tori Vidales led off the second with a single and eventually scored. She opened the fourth with a single and rode home on Sanders’ homer to left-center. Vidales was the No. 5 hitter in the lineup, but she proved to be a spark plug leading off innings.

“Yeah, oddly enough, it’s happened to me quite a few times while I’ve been here,” she said. “I think I’ve been in the five-hole most every single game, and I’ve led off probably five times since the start of the first game. It’s been crazy. I don’t know. My goal is to always get on. I think my mindset changes a little bit when the runners are on because you see a visual of what you’re trying to do, what your mission is and what you’re trying to accomplish.

“So when there’s nobody on, I’m just trying to square it up and wherever it goes, it goes it goes. Hopefully it lands somewhere where the defenders aren’t, but just getting on because I can be the spark plug because the hitters behind me are going to knock me in.”

That happened in the fourth with Sanders, who connected off Morgan Foley. Foley was Team Hayward’s starting pitcher. She gave way to Taylor McQuillin in the second but came back to begin the fourth in the circle.

Sanders wasn’t sure what to make of the homer.

“Hitting it, I didn’t really feel on time, which is kind of why I stopped my swing, but I guess I squared it up enough for it to go,” she said. “So I was pleasantly surprised by the outcome.”

This day again was about Osterman, who has given up only one run in 18 innings pitched so far this season.

“I competed well with probably my B game today,” she said. “I didn’t necessarily feel as great as I did last Monday (a complete-game shutout). But I felt well enough. Obviously our team had some momentum, which was easy to keep carrying over.”