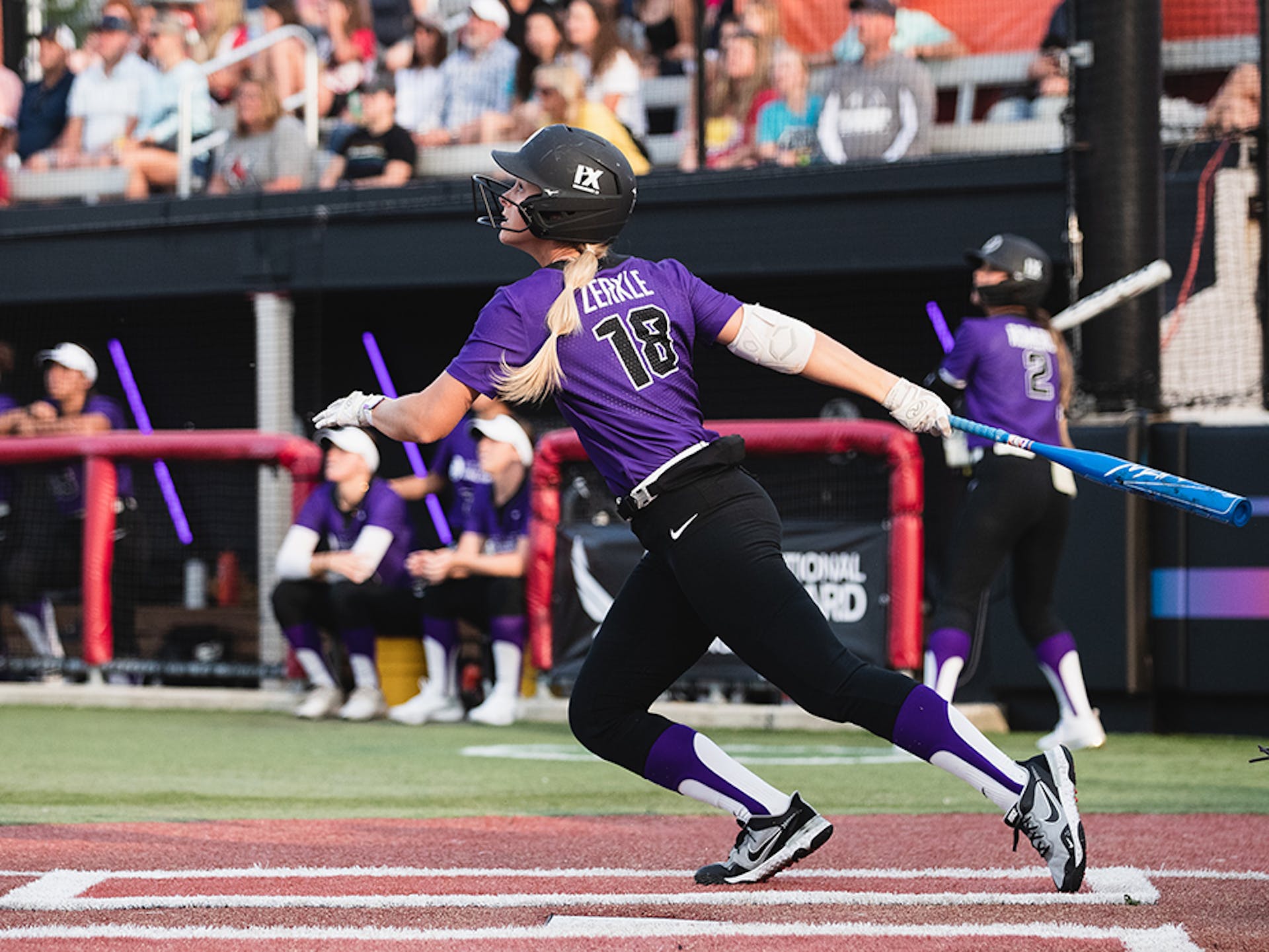 From A to Z. It’s a catch phrase that denotes completeness or totality.

For Athletes Unlimited softball, we can expand that phrase to “from A to Zerkle.”

Now in her third championship season in Rosemont, Ill., Zerkle has become the embodiment of the complete and consistent player, one who has grown into a multifaceted force on the field, one who can score offensive points in every way possible.

Two years ago, this product of Marshall University introduced herself to AU and quickly made a name for herself with her on-base ability and speed on the basepaths.

Then in 2021, along came the power. After not hitting a home run in Season 1, Zerkle homered in the first game of Season 2 on her way to hitting four for the season to go along with a .300 batting average and six stolen bases in six attempts. Those totals enabled her to finish sixth on the individual leaderboard for two seasons in a row.

That upward growth curve continued this summer during AUX Softball in San Diego, where Zerkle batted .385 with a .467 on-base percentage and a home run to finish fourth on the board.

The arrow continues to point up as Season 3 in Rosemont is in full swing.

“I’ve had a really good start to the season,” she said. “I think that playing in AUX really helped because it was kind of like a spring training. I also got to be a captain there as well, so it kind of prepared me for the first week here. I’m just seeing it well. Very familiar, obviously, with the third season being here (in Rosemont). It’s been a good start.

“The last three years, I think, it’s really grown because of the environment here. It is very individual, but it’s also very team based. It’s cool to see how if you perform, you get a shot. I’ve been able to perform and get a shot because there are no coaches involved. It’s who’s doing well. From my first season, where I slapped a lot, to my season last year where I hit several home runs and this year kind of having a mix of both worlds, but just being really comfortable. And this environment has been fun for me to grow and be more comfortable throughout. It’s fun.”

Small ball. Long ball. Morgan Zerkle can do it all 😤#AUX | 📺: ESPNU pic.twitter.com/I6tv32LJI2

What’s more, Zerkle found herself one of the four team captains to begin this season in Rosemont.

“It was fun because I joke that I’ve always been the ‘first loser,’” she said. “I hadn’t medaled or been a captain. So it was fun to be in that leadership role and combine my abilities as a coach with being a player.”

Born and raised in Milton, West Virginia, Zerkle stayed in-state for college and became one of the most productive players in Marshall history. She finished her collegiate career atop Marshall’s record books in batting average (.451), triples (14) and stolen bases (162) while ranking second in slugging percentage (.594), on-base percentage (.489), runs (181), hits (289) and total bases (381).

In AU, with so many players from Power 5 conferences, Zerkle takes immense pride in repping a mid-major college program. She is joined this season by fellow Marshall alum Aly Harrell.

“That’s something I take a whole, whole, whole lot of pride in, just that you can do that,” she said. “You don’t have to play at a Power 5 to be able to compete at a high level. This is my sixth year now out of college playing pro so it’s a lot easier now than it was right out. Your confidence isn’t always as high when you are a mid-major athlete right out, trying to get your footing in the pro world. But I’ve stuck to my own every year.

“I feel like I’m finally at a place where I’m not the mid-major kid anymore that really has to prove themselves over and over again, proving myself. So it’s nice to relax and be able to say, ‘Yeah, look what I have done.’”

Zerkle’s numbers in college suggested she would hit for power as a pro. That came to the fore last season. It also doesn’t hurt that AU’s individual points-scoring system places a premium on hitting home runs.

“Just being confident in using it more,” she said of her power stroke. “Being as fast as I am, slapping is kind of easy. It’s an easy choice to have, to make sure I make contact. But here, with the points system, you get 40 points if you hit a home run, so it’s kind of encouraged me to swing more because I’m capable and I have the power so why not go for 40 points versus going for 10 points? It’s definitely encouraged me to be more powerful and use that skill set.”

Of course, with singles, doubles, triples and stolen bases being rewarded, Zerkle had no problem piling up points during her first two seasons, even without hitting a home run.

“I think it shows the value of every person and their skill set and what they can bring to a team, having that table-setter type of hitter, having the home run kind of hitter,” she said. “The game shows how valuable it is to have a catcher who can call a good game. I think that’s something that gets overlooked. I think in AU, you can see a lot of those skill sets shine when it’s so player led in every little thing and in every little moment and pitch matters.”

Zerkle is hoping her career-long consistency pays off in another climb up the leaderboard this summer.

“I want to stay consistent again, maybe not be the first loser, but maybe win it,” she said of the top spot on the board. “That’s always the goal, to win it. I think people are afraid to say it, but of course I want to win. Who doesn’t? But most of all, be consistent and be a little more of a leader this year because I am six years into playing and have that experience here at AU. So being able to mentor people like Aly Harrell to make my mark on the league as well.”

Still young (27 on Aug. 12), Zerkle has plenty of softball left in her. This season she is playing for the Natasha Watley Foundation, which “provide(s) programs for girls in historically marginalized communities to expose them to the beautiful game of softball.”

Her spirit of mentoring has led her into coaching. For the past several years, she has been an assistant coach at Miami University in Oxford, Ohio.

“I love coaching, and I think I’m going to do it as long as I can, forever probably,” she said. “I’ve gotten several offers for different jobs this year, but I’m very passionate about coaching those mid-major kids. I think that’s hard for some people to understand, but that’s what I’m most passionate about. I don’t know if I’ll move up in coaching, but I love coaching, and that’s definitely what I’m going to do forever.

“Playing wise, I think I’m just now getting to the top of, or even close to, my peak of where I could be. I think I was not as developed, even out of college, as some of the other players, so as long as I’m still improving, getting better and healthy, I’m going to keep playing. I have no intention of stopping any time soon.”