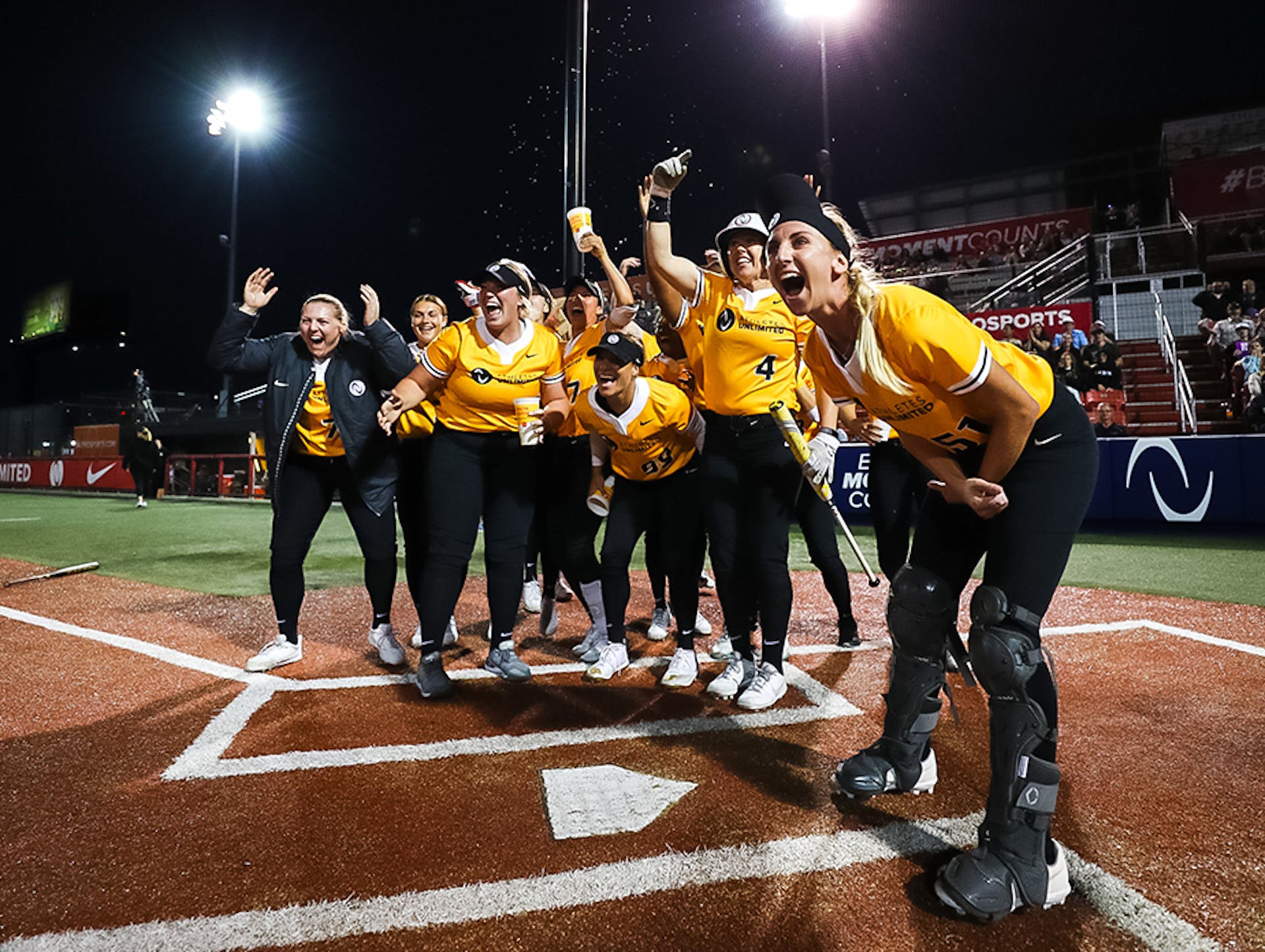 It’s been quite the few days for Anissa Urtez.

First, she was taken in the first round of this week’s Athletes Unlimited Softball draft by Team Gold Captain Amanda Chidester.

Urtez made it all look good Saturday night as she had an RBI single as part of a three-run sixth inning that gave Gold a 3-0 lead and 60 rollover innings points.

Team Ocasio (Purple) tied the game in the bottom of the seventh,, but never fear, Urtez was there.

Her three-run triple in the eighth was the tie-breaker as Team Chidester scored an extra-inning 8-3 victory Saturday night at Parkway Bank Sports Complex.

Urtez may have had some inside information that she would be a first-round pick by Chidester, her fiancée.

“I kind of had a feeling,” Urtez said with a smile. “We had talked about it a little bit. I knew I was going to be up there, either in the first or second round. So that was cool.”

Until late in the game, this was the second pitchers duel of the day, as Team Chidester starter Carrie Eberle hooked up with Purple’s Aleshia Ocasio, who wound up pitching all eight innings.

With the 60 innings points on the line, Team Chidester broke through in the top of the sixth.

Sam Fischer led off with her first home run of the season and just her second hit. The ball carried high down the left-field line and was being pushed toward the line by a strong wind. It stayed fair, and Fischer had a homer, which was upheld on replay.

Fischer, the game’s MVP 2, said she didn’t think she needed to “will” the ball fair.

“A little bit, but for the most part, when I saw it off the bat, I thought it had a chance,” she said. “I think as hitter, you kind of get a feel of what’s going to happen on certain balls. I watched it a little. I saw that it was crossing. I was just hoping they would make the right call because it landed foul (after it cleared the wall fair).”

Chidester singled to center field and was forced at second on a grounder by Haylie McCleney. Ali Aguilar walked, and Urtez singled home McCleney to put runners on first and second.

Morgan Zerkle then lifted a fly ball, which Jazmyn Jackson caught at the right-field wall. Aguilar kept running and scored all the way from second, with the play going as a sacrifice fly.

Sara Groenewegen relieved Fiser and put out the fire. It was the second time Groenewegen was called on to relieve in the game. She worked the fifth and sixth innings, as well. For her efforts, she earned the win to improve to 2-5. She also was voted MVP3.

“I honestly didn’t think I could (re-enter the game),” she said. “With AU, the rules are just a little bit different. Usually, the starter can come back in. I was kind of shocked. I was ready, and I told Chiddy I’m a competitor, and if you need me out there, I’m good. It’s more so late in the game, especially after you pitch, it’s more so if you’re ready in the brain. I think your body’s warm regardless. I was ready to go out there and compete.”

Urtez’s three-run triple (officially ruled a double, with Urtez reaching third on an error) was one of two triples hit that inning. Sydney Romero drove in two more with a triple later in the inning to put the game on ice.