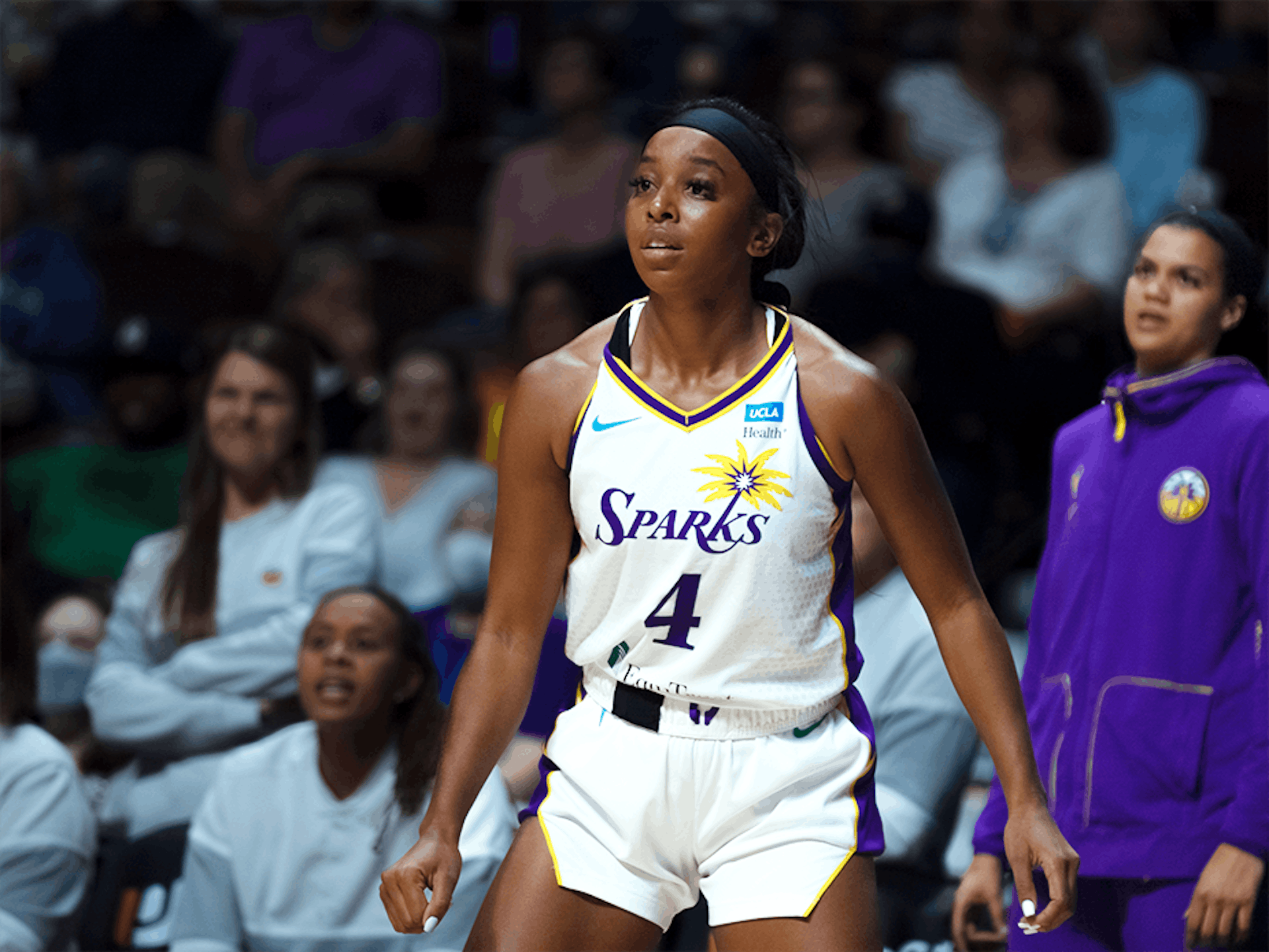 Lexie Brown has never felt a disconnect from the game of basketball.

It’s in her genetics. She bleeds orange, like the color of the ball she shoots effortlessly with a graceful arc from anywhere on the court.

If there was a disconnect from the sport she’s loved since she was a little girl, it’s moreso been from the WNBA, considering she’s the daughter of the first NBA superstar to ever pump up his shoes for a Slam Dunk contest and whose no-look throwdown en route to the 1991 title remains iconic.

“I grew up with an NBA mind,” Brown said, whose father Dee played 14 seasons in the NBA and also coached two franchises in the WNBA. “I think the WNBA is amazing, the things that they do. But there’s a lot of things that they can catch up on or be better with as far as how things are run.”

Now in Los Angeles as part of a Sparks roster that is practically brand new for coach Derek Fisher to meld and find chemistry with, the Athletes Unlimited star who finished fourth on the leaderboard with 5,317 points during the inaugural season feels she’s found a sense of comfortability with her fourth WNBA team in five seasons.

“So, AU was perfect for her. She loved the games, but she absolutely loved putting a roster together.”

Brown spent enough time watching her father coach former NBA greats like Grant Hill, Tracy McGrady and Vince Carter, so it was at an impressionable age she fell in love with the sport from all aspects and wanted to be great in the game of basketball.

Brown, who was averaging 7.7 points per contest after 10 games, said talking to Fisher, a former Los Angeles Laker, and hearing him share his personal experiences with Kobe Bryant and Phil Jackson makes her feel right at home as if there are two basketball junkies sharing stories.

She’s also enjoying being around a group of players who have a lot to prove, and though the beginning of the season has been tough, she says it’s been good for the Sparks and by July and August they’ll be battle-tested.

Fisher said with the team retooling its roster during the offseason through free agency, he knew it was important to add quality guard experience and perimeter shooting. With Brown, that was natural. But where he said the most underrated part of her game comes is on the defensive end. It was a skill he appreciated from her game and knew he could use with the team he was building.

“We thought that it could be a good fit … and she’s done a great job of coming in and initially just earning a spot on a 12-player roster, which is tough to do in the W,” Fisher said. “She’s been great on both ends, and we just want to try and find a way to help her to continue to get comfortable and be confident and I think as time goes on she’ll continue to show more and more of her game.”

Fisher, a five-time NBA champion, laid a foundation of things for the Sparks to follow and gives them the freedom to execute by playing and reading the flow of the game. His players compete at their pace with their style and are expected to grow so they can figure things out on their own.

It’s a method that’s allowed the Sparks to form a sense of togetherness and chemistry, while building what is essentially a new team of players who’ve never played together, including Brown.

“She’s been great to have with us, we’re very fortunate,” Fisher said. “She’s been really consistent on both sides of the ball. And you can tell she cares, which I do think is connected to where she comes from and what she’s about.”

Her game log doesn’t necessarily reveal anything spectacular, and her stat sheet isn’t glaring. But there’s a reason she’s averaging nearly 30 minutes per game and is finally getting a chance to showcase more than her scoring prowess.

Brown, who recently buried her 100th career 3-pointer in a win at the Minnesota Lynx, also opens and spaces the floor for her teammates and has played tremendous defense against some of the best offensive players in the league. No surprise there, considering she ranked second during the AU season with 38 steals.

Brown’s basketball IQ, and those NBA genetics, are revealed as she stays in constant rhythm with how a game is being played. Her feel for the game, and savvy nature has also become infectious to her teammates.

“She plays her game; she doesn’t get outside of herself,” Sparks teammate Jordin Canada said. “She’s very calm and poised. And now she’s proving to everybody in the league that she belongs here.”

It might not be a surprise her season-highs of 12 points came against the Chicago Sky and Minnesota, both teams she played for during her career. She won a WNBA title with the Sky last season and played the previous two seasons in the Twin Cities after her rookie campaign with the Connecticut Sun.

Prior to the Sparks acquiring Brown from Chicago in exchange for the rights to center Li Yueru, she was unsure where she would follow her splashy AU debut that dripped with swag on and off the court.

“I always wanted to play, like whether it was gonna be here or overseas – I was never gonna stop playing basketball,” Brown said. “It’s a game I love. I love being in the gym, I love training. I love the offseason, in-season, I love every second of being a professional athlete.”

A love that was reinvigorated with what she calls her Athletes Unlimited family, from her time on the court, to draft-day fun as a three-time captain, to league-bonding meals, to impromptu photoshoots with the Las Vegas Strip in the background.

The only thing brighter than Brown’s perfect smile might have been Sin City’s infamous skyline.

Brown, the 10th-leading scorer in AU with 210 total points and an average of 14.0 points per game, said she found confidence in herself the WNBA never provided for her. Whether it was the league itself, her ever-changing teammates, her backcourt mate for all five weeks Taj Cole, or the entire environment on and off the court, it was an emotional and mental cleanse that helped her game evolve.

Basketball great Sheryl Swoopes was quick to respond to lead commentator Cindy Brunson, who asked which AU player reminded the Hall of Famer of herself.

“Just having positive words, people not being hesitant to show love or to acknowledge somebody’s work or acknowledge somebody’s performance – that’s just something that I had never felt in the W,” Brown said. “I’ve never really needed other people’s opinions or validation, but to feel it, it was nice. Just feeling that gave me a new sense of confidence in my game.”

Which is why she didn’t hesitate to answer the obvious question of returning to Athletes Unlimited in 2023 before the inquiry was even completed.