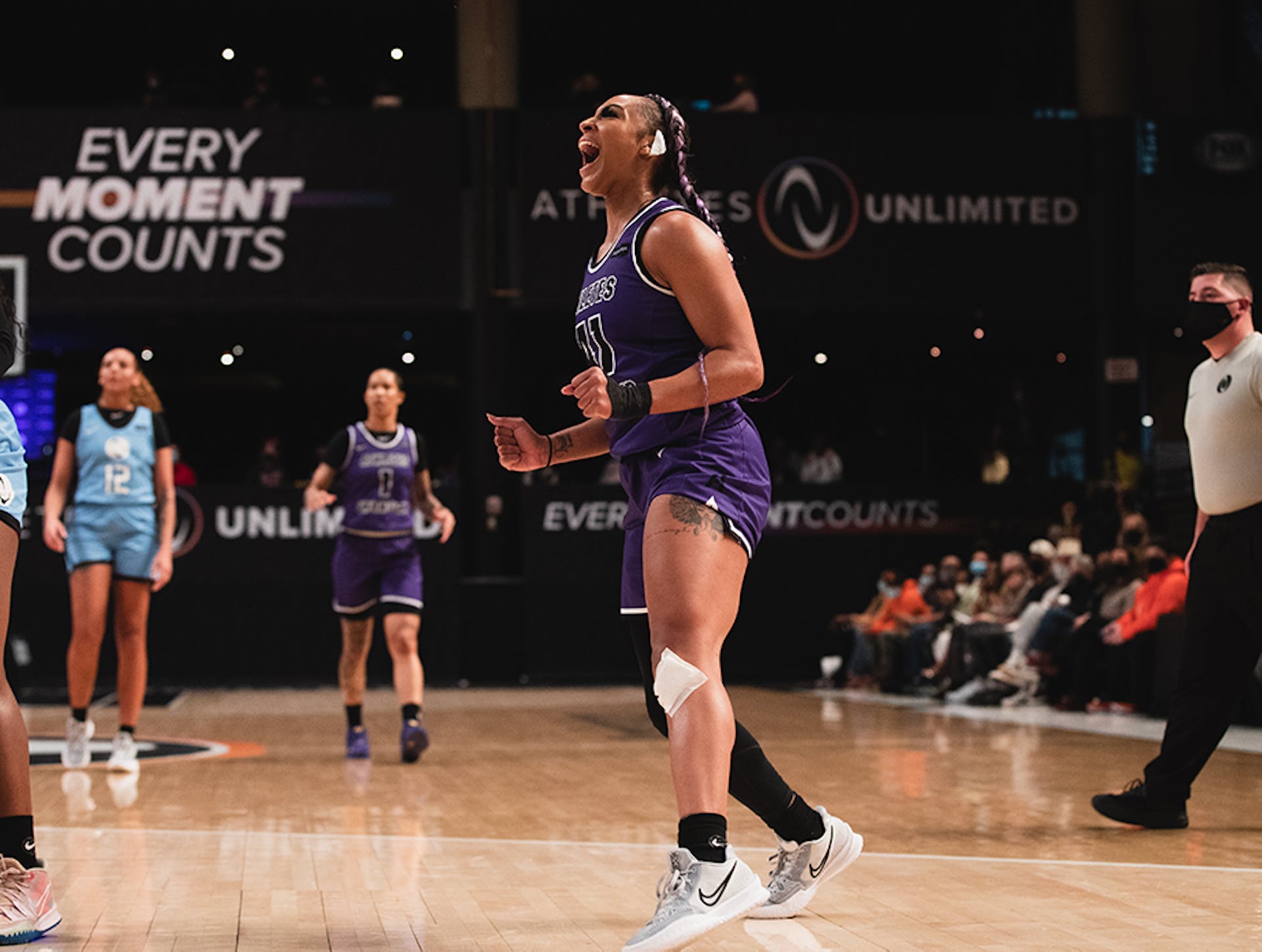 LAS VEGAS — It was the last time this collection of players would be on the floor as one, and Team Carrington had every intention of going undefeated after the first week of Athletes Unlimited Basketball.

And when team captain DiJonai Carrington left the game after being poked in the eye early in the third quarter, the motivation was even stronger.

“It’s about protecting our player and playing for that player that got taken out,” Natasha Cloud said. “Even though it was an incidental call we knew that it’s the play that gets you riled up as her teammate.”

Thus, after Carrington was poked in the eye by Kirby Burkholder, a 15-4 run ensued and led Team Carrington to an 84-78 victory over Team Sims, which finished the first week 0-3.

Team Carrington becomes the first squad in Athletes Unlimited Basketball history to post a perfect 3-0 record. The team opened the week with a comeback victory over Team Mitchell on Wednesday night before outlasting Team Russell by a 110-104 margin in double overtime on Friday.

On the flip side, Team Sims played with a sense of toughness the entire game under a sense of urgency but became the first team in league history to go 0-3.

Isabelle Harrison led Team Carrington with 19 points, Carrington finished with 16 and Cloud had 12.

“We just tried to go out there and play hard and play together,” Harrigan said. “I feel like we gave everything we had.”

The league made up of 44 players will draft new teams in time for next week’s action.

After erasing a seven-point deficit and taking a 54-48 lead in the third, Team Sims made a run of its own to pull within three, but 12-year WNBA veteran Ty Young came off the bench to score six of Team Carrington’s final 10 points of the third and help keep the lead at four, 66-62.

“That’s our O.G.,” Cloud said of Young. “She’s definitely our unsung hero of the day, for sure.”

Team Sims made a push in the fourth quarter and clawed its way back to a 75-72 lead, but as hot as Brown was shooting – she came into the game hitting 81.8% from the floor and was hitting 75% in the game at that point – she missed three critical close-range attempts that helped lead Team Carrington to score 12 of the game’s last 15 points to provide the final margin.

“That’s something we talk about, is getting stops,” Young said. “When you get stops like that, we want to get out and run. The ladies were out there and that’s what they did. We came together on defense, we knew they were going into Kalani, we had to collapse and make her make those tough shots. Great for us she was missing.”

Both had offensive runs to hold leads in the opening quarter, with Team Carrington using a 6-0 run to open a 14-9 lead, and Team Sims answering with runs of 8-0 and 13-5, to pull back in front by three, at 22-19, sparked by a trio of 3-pointers by Harrigan.

And while Team Sims kept its hot hand in the second quarter, hitting 50.0% (6 of 12) from the floor, Team Carrington was plagued by the long ball, struggling to an 0 for 7 showing from 3-point range and 7 of 21 clip in the period.

Brown, who came into the game shooting 81.8% from the floor through the first two games, opened the quarter by scoring Team Sims’ first nine points. Team Carrington fought back with a quick 4-0 spurt to tie the game at 37-all, but Team Sims closed the first half on a 7-2 run to take a 44-39 lead into the locker room at halftime.

Notes: Harrison, Cloud and Brown each earned additional points for MVP honors, as voted on by the players and members of the Unlimited Club. Harrison, who led Team Carrington with 19 points, received 90 points for MVP 1 and 482 points overall. Cloud led the team in assists with 7 and accumulated 447 points (60 MVP points, 192 stat points and 200 win points). Brown, who tallied 20 points for Team Sims, earned 30 points for MVP 3 honors and had 311 total points.

Team Carrington won the game for 100 win points and the third and fourth quarters – each worth 50 points – for 200 win points to close out Week 1. Team Sims opened the game with two quarter wins, giving each member 100 win points.