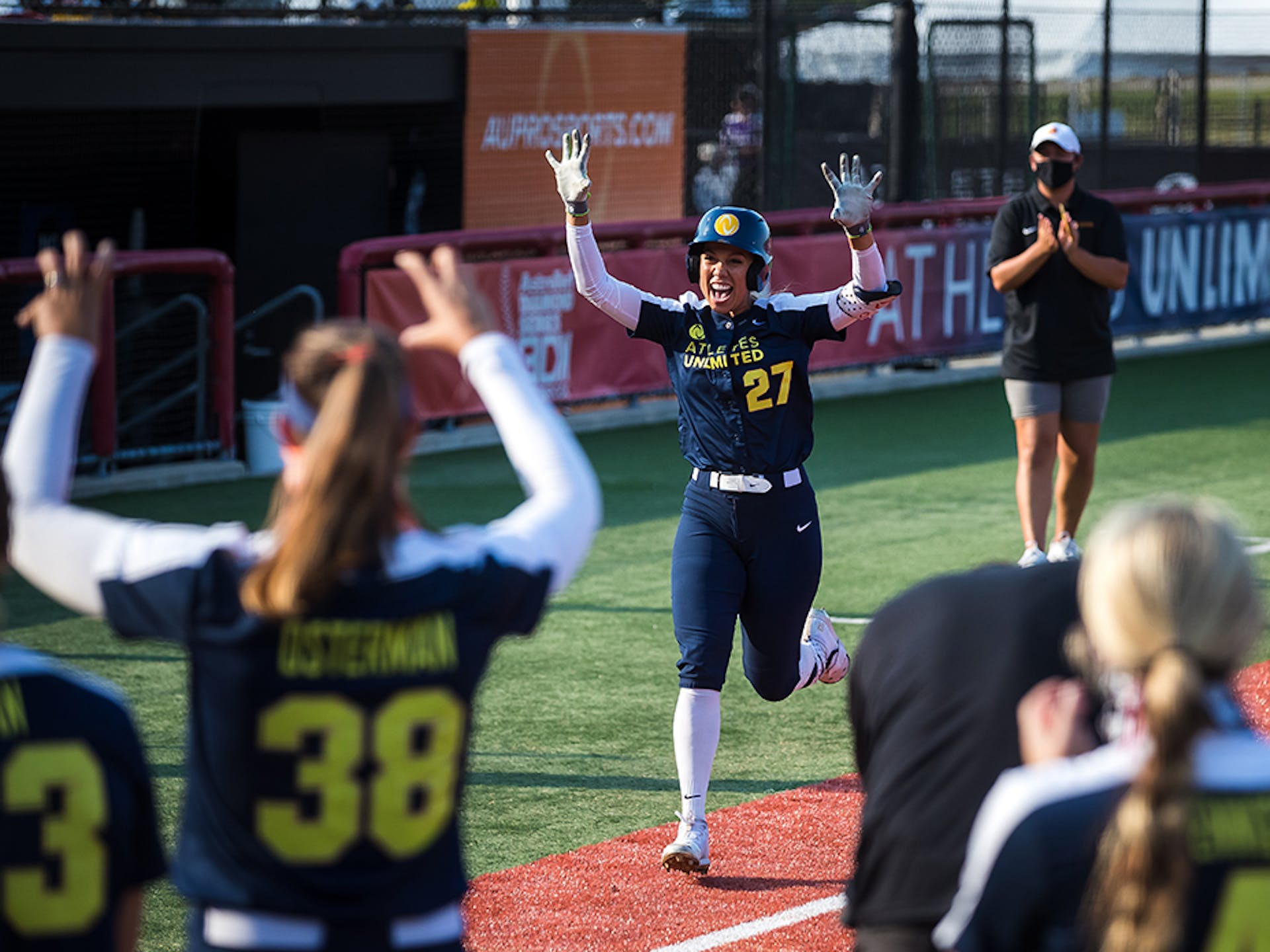 If she had her druthers, Cat Osterman probably wouldn’t have made coming in to pitch yet another day to be her top priority.

So it was Sunday in the second game of Athletes Unlimited’s doubleheader at Parkway Bank Sports Complex in Rosemont.

Osterman, Captain of the Gold Team, started and worked six inning in Saturday’s 5-2 victory over Team Hayward. But after watching a tough Team Ocasio squad claw back from a 2-0 deficit and be in the midst of a four-un rally in the bottom of the fourth Sunday against Randi Hennigan and Karissa Hovinga, Osterman took matters into her own left hand and put out the fire.

She recorded three outs to minimize the damage and allowed only two hits and no runs over four innings, striking out six and walking one. Her teammates then rallied for three in the top of the sixth for a 5-4 victory to move them to 2-0 this weekend. Team Ocasio dropped to 1-1 as the holiday weekend wraps up Monday with a pair of games.

Osterman is now 4-0 in Athletes Unlimited play over the first two weekends of the inaugural season.

“I was hoping I’d only be needed for one, maybe two, innings,” she said. “I knew that when we lost JB (Jessica Burroughs, who is unavailable) from our roster earlier this week that we were going to have to put the pieces together to get three wins. Right now I’m willing to do whatever it takes to help everybody win, and that’s what we needed. I figured it we kept it close, I knew with our lineup we had a chance to be able to come back and win.

“Thankfully, I was able to do my job and give our offense some time to get some momentum and some runs in.”

Osterman’s team scored a run in each of the first and third innings, with Sahvanna Jacquish hitting a two-out homer in the third. Team Ocasio made its comeback in the fourth against Hennigan and Hovinga before Osterman put herself in. Jessica Warren and pinch hitter Nadia Taylor had doubles in the inning for Team Ocasio. In came Osterman, and she got Anissa Urtez on a sac bunt before striking out Jazmyn Jackson and pinch hitter Jordan Roberts.

That settled things down, and Team Osterman got three in the sixth on a solo homer by DJ Sanders and a two-run double by Haylie McCleney.

McCleney gave the credit to Osterman for shutting the door.

“It gave us a great lift,” McCleney said. “Randi did one heck of a job giving us the innings she gave us. We knew it was going to be a pitch-by-committee today. And Cat coming in and shutting the door like that really gives us confidence as hitters. She’s going to shut it down in the circle. We just need to do our job, manufacture runs and try to piece together good at-bats, and that’s what we did.”

Captain Aleshia Ocasio started in the circle and pitched four innings, giving up one earned run.

For Monday night’s weekend finale against Team Show, don’t be surprised to see the Cat prowling in the circle again.

“Right now the plan is that I’ll start and go as long as I can,” Osterman said. “I gotta do what I gotta do.for us to get some W’s. But I know Randi’s (Hennigan) ready to get in some innings again, and I know Hov (Hovinga) will be ready. If we need to use them, we will. Hopefully we’ll get some runs and it’ll make a decision to put someone else in a little bit easier.”