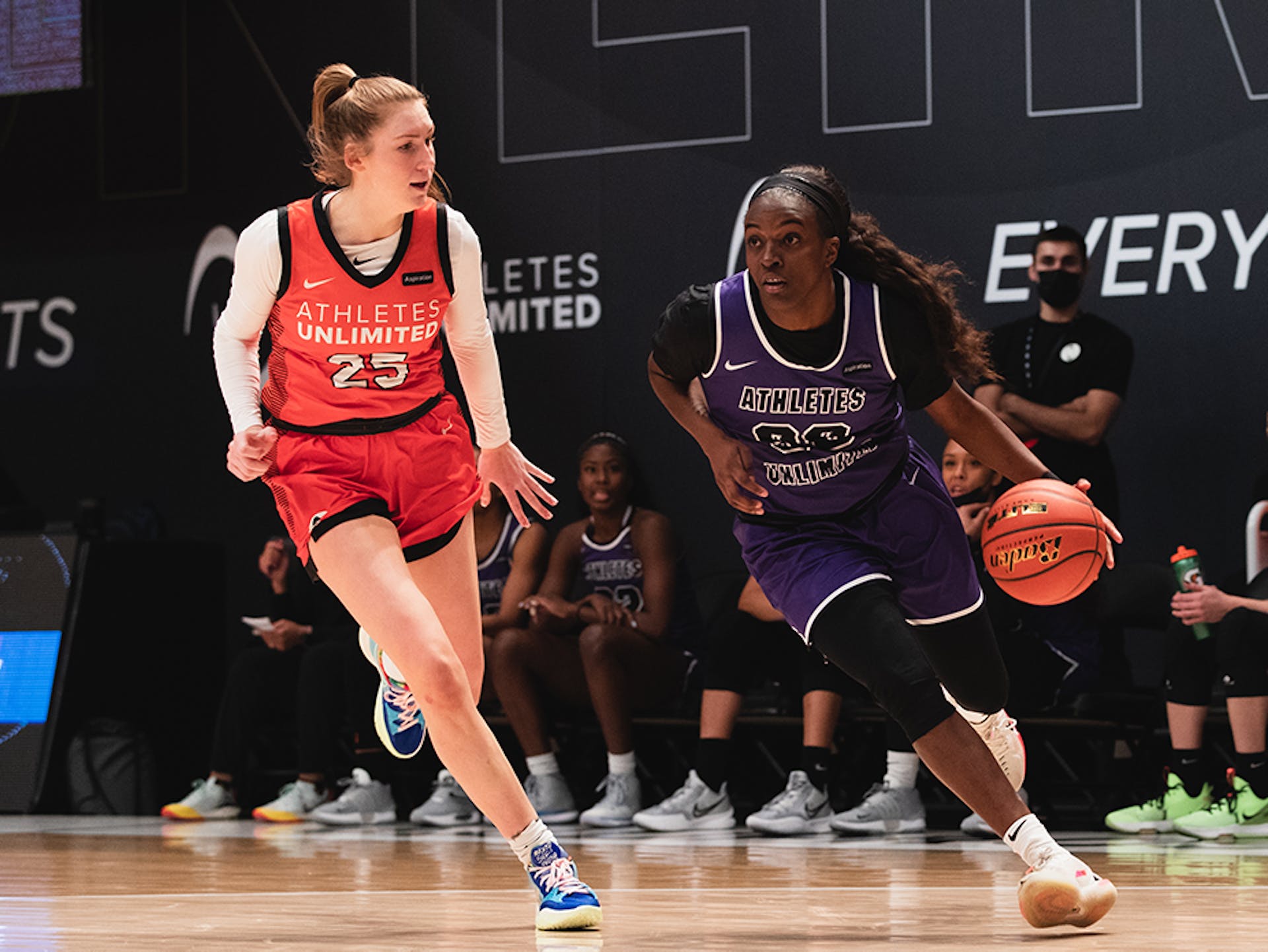 LAS VEGAS — The inaugural Athletes Unlimited basketball season ended more than a week ago, but the aftershock continues to reverberate with WNBA training camp roster signings.

Aside from players expectedly inking extensions or new contracts, six players who may not otherwise have gotten a legitimate opportunity will now take their places in training camps after impressive performances at Athletes Unlimited Arena.

“I definitely didn’t come into this situation trying to get a training camp contract, I just wanted to play basketball,” said Lauren Manis, who will join the Seattle Storm in April. “I think it definitely is the icing on the cake. I’ve had a pretty tough professional career so far. So to see things kind of going up is really nice, and it’s really all because of AU.”

In addition to Manis, the Las Vegas Aces signed Kalani Brown and Sydney Colson; the Dallas Wings scooped up Destinee Walker; MeMe Jackson will join the Washington Mystics; and, Taj Cole, AU fan-favorite, is headed East looking for a roster spot with the Connecticut Sun.

“Everybody knows how thankful I am to AU,” said Cole, who finished seventh in the league with 16.9 points and 6.06 assists per game. “But now I’m ready for Connecticut. You know, same thing. I’m going in there, somebody who didn’t get drafted, somebody who just worked really hard, and I just want to go in there with a chip on my shoulder and help that team.”

For Manis, it’ll be her third trip to a training camp, after being drafted by the Aces, attending two, but having her pro career on American soil disrupted by the pandemic. She’s seen her share of success overseas, but after averaging 10.9 points and 5.5 rebounds per game while putting her blue-collar talent on display during the AU season, she believes she’s ready for the WNBA.

“I definitely proved to myself that I am good enough to play at the next level,” Manis said. “And I showcased my skills to a lot of people that were following and they were able to see what I could do. But I think I also proved it to myself. I’m young, I’m fairly young. And I do struggle with my confidence. And coming here and being able to compete with these amazing athletes, it’s definitely boosted my confidence a little bit – that’s key.

“If you’re feeling confident, you’re gonna play 10 times better than if you’re not. And basketball really is a mental game. So I think now I’m gaining that confidence and going into this training camp with a whole different mindset is going to be huge for me.”

It’ll also prove huge for Jackson, who said she also benefitted from a boost in confidence after playing alongside several WNBA players and former champions, including Mystics star Natasha Cloud. The two will be reunited in camp after playing on three teams during the five-week AU season, including Weeks 4 and 5, when Cloud drafted Jackson in the fifth and fourth rounds, respectively.

“I’m really just blessed to be able to have the opportunity to get a training camp invite, and have a chance to go compete and play with a bunch of great players,” said Jackson, the only player to drain more than 100 3-pointers, with 101. “I feel like I’ve gained more confidence and me shooting the basketball. And that’s with the help of my coach – whoever it is at the time, whatever player-coach it is at the time – along with my other teammates. They helped me build my confidence. So I’m just grateful.”

Renowned basketball analyst LaChina Robinson believes the arrival of Athletes Unlimited in the basketball spectrum was not only good for the women who played but the WNBA thanks to the added exposure of 44 of the world’s greatest players being able to compete without having to travel overseas.

“It’s been awesome and has opened up a lot of opportunities for players that want to make the move into the WNBA, or want to deepen their imprint on the pro side of things,” Robinson said. “We talk so much about how AU is going to help these players make their move to the WNBA, but I think this also shines a light on the WNBA and brings awareness to the league in general.

“There’s just so many benefits to this and I just think it’s so well done, very well put together, the energy, the facility, the interaction with fans, the accessibility to these players is something that is very rare. It gives you a real family feel and a family atmosphere.

“It’s just really unique and something that I hope continues to grow and that it gives even more opportunities for WNBA players to have a place to play in the offseason.”

Volleyball: Where to Watch Week 2