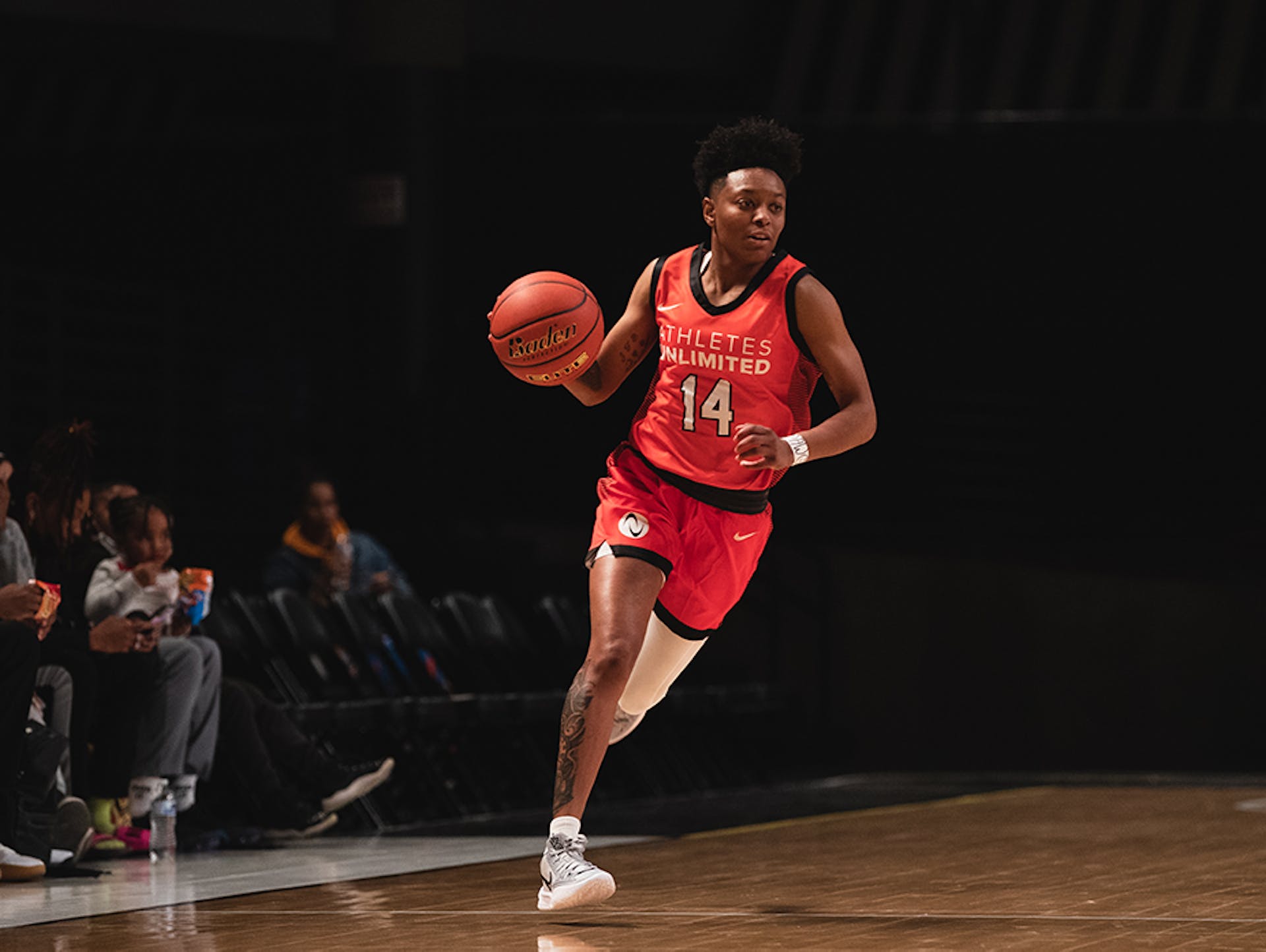 Cole brings compassion and family to the floor with Athletes Unlimited

LAS VEGAS — For as talented as Taj Cole is on the court, it’s her mental toughness off of it that has led her back to basketball in time for Athletes Unlimited’s inaugural season in Las Vegas.

Her credentials are impeccable, indeed, having been a star in high school and college.

Cole spent the 2015-16 season at Louisville, starred for two seasons at Georgia, and finished an impressive career at Virginia Tech, where she earned her master’s degree.

But how she’s handled her life in 2021 has shaped a young lady who’s had a passion for basketball for roughly 18 years, into a grown woman whose love for her family superseded anything – and everything – else.

“I’m amazed a lot when I watch how she interacts with other people, whether she just met you, or whether she’s known you for a while,” said Starr Willis, Cole’s mother. “She’s always been the type that puts others first and is very into what makes other people happy and learning about other people. She’s deeply into, ‘how are you doing’ and ‘how can I serve you’ and that’s just who she’s been for a very long time.”

Though Willis won’t take credit for any genetic carryover when it comes to Cole’s passion, her daughter says mom was her biggest influence in that department. Raised by a mother who didn’t have a lot when she was growing up, Cole said her compassion for others, and work ethic toward whatever it was she set out to do, came from mom.

“She’s always trying to give back to the community,” Cole said of her mother. “Her dream was to always have a place where kids can come and feel safe and play and have the things that they need.”

An ironic motive, considering Cole’s favorite movie as a little girl, one that helped inspire her basketball career.

At 5 years old, Cole fell in love with basketball after watching the movie “Like Mike,” a story about an orphan living in a group home among other kids who didn’t have much and yearned to find a safe haven with a family that loved them. Calvin Cambridge, played by Lil Bow Wow, finds an old pair of sneakers that once belonged to Michael Jordan, and his basketball talents magically increase to an NBA level.

The touching storyline brings viewers to a feel-good ending, so considering the heart and soul Cole established from her loving household, of course, the movie was endearing to her.

Except, she emulated Allen Iverson, who also grew up in Virginia, roughly one hour from where Cole learned the game and established her own set of handles.

Cole’s passion for basketball never wavered and grew stronger when her mother started an AAU program and her father coached her through the middle-school years. The growth was inevitable, as she continued to develop her skills en route to a nationally acclaimed career at Lloyd C. Bird High School in Richmond.

There was no doubt Cole was en route to becoming one of the nation’s finest women’s college basketball players of her time, as she was named the 2014-15 Gatorade Virginia Girls Basketball Player of the Year after averaging 19 points, 5.5 rebounds, 5.3 assists and 3.5 steals her senior season.

While at Georgia, she led the SEC and was fifth nationally in assists per game during a storied 2018-19 season that saw her average 11.1 points per contest and 7.0 apg. Over the final three seasons of her career, Cole had an assist-to-turnover ratio of plus-2.8.

After going undrafted in the 2020 WNBA Draft, she signed a contract to play in Spain for the 2020 season before her career came to an abrupt halt due to family obligations and she returned home in December of that year.

“And I haven’t played in a game since,” said Cole, who attended tryouts in December 2021, and earned her spot with Athletes Unlimited there.

But beyond her skills and a successful tryout, it’s what she endured last year that has her focused on a statement-making comeback.

While playing in Spain, something – call it intuition – was telling Cole to come home. Her mental waves were swelling, and somehow she knew her family needed her.

“I ended up going home and finding out my grandma had Stage 3 cancer,” Cole explained.

And after being put on hospice, Willis said she brought her mother to their house so she could spend her final days with family, surrounded by love and comfort, including Cole’s presence. It also meant Willis wouldn’t be able to run her basketball facility or the AAU program, take care of Cole’s brothers, or tend to other day-to-day obligations.

“Wearing many hats with the school and so many different things, Taj knew that there was no way I was going to be able to keep up with things and be there for my mom,” Willis said. “I knew that I needed help, but it was unspoken. She just stepped into my role and did everything that I would do. I was amazed at how well she did things, but still would come home and relieve me and sit with my mom while I got some sleep as well.”

Cole went from pursuing her dreams of being ‘like Allen’ in Spain, with hopes of returning to a shot in the WNBA, to running a 20,000 square-foot facility, training and mentoring basketball youths, taking care of her brothers – dropping and picking them up at school, learning to cut their hair and cooking them meals – all during a pandemic, and at 23 years old after most of her previous 18 years had been spent with a basketball in her hands.

“It was definitely rough,” said Cole, who relied on motivational videos from the likes of Eric Thomas and Kobe Bryant. “I’ve dealt with death. I lost my sister, I’ve lost uncles … so just losing people period in my family, I kind of know how to deal with it. But with this situation, I had to put myself in my mom’s shoes … I think I kind of understood it more. Kind of hit me hard but I just had to be tough for my mom and step into some roles that I never had before.

“It’s something that I did, and I sacrificed for my family. So, to be 24 now and playing again, I definitely won’t forget that.”

Especially when she takes the floor on the opening night of the Athletes Unlimited Basketball season, with “10.10.10” written on her shoes, in honor of her sister, Cobi, who died while delivering Cole’s nephew.