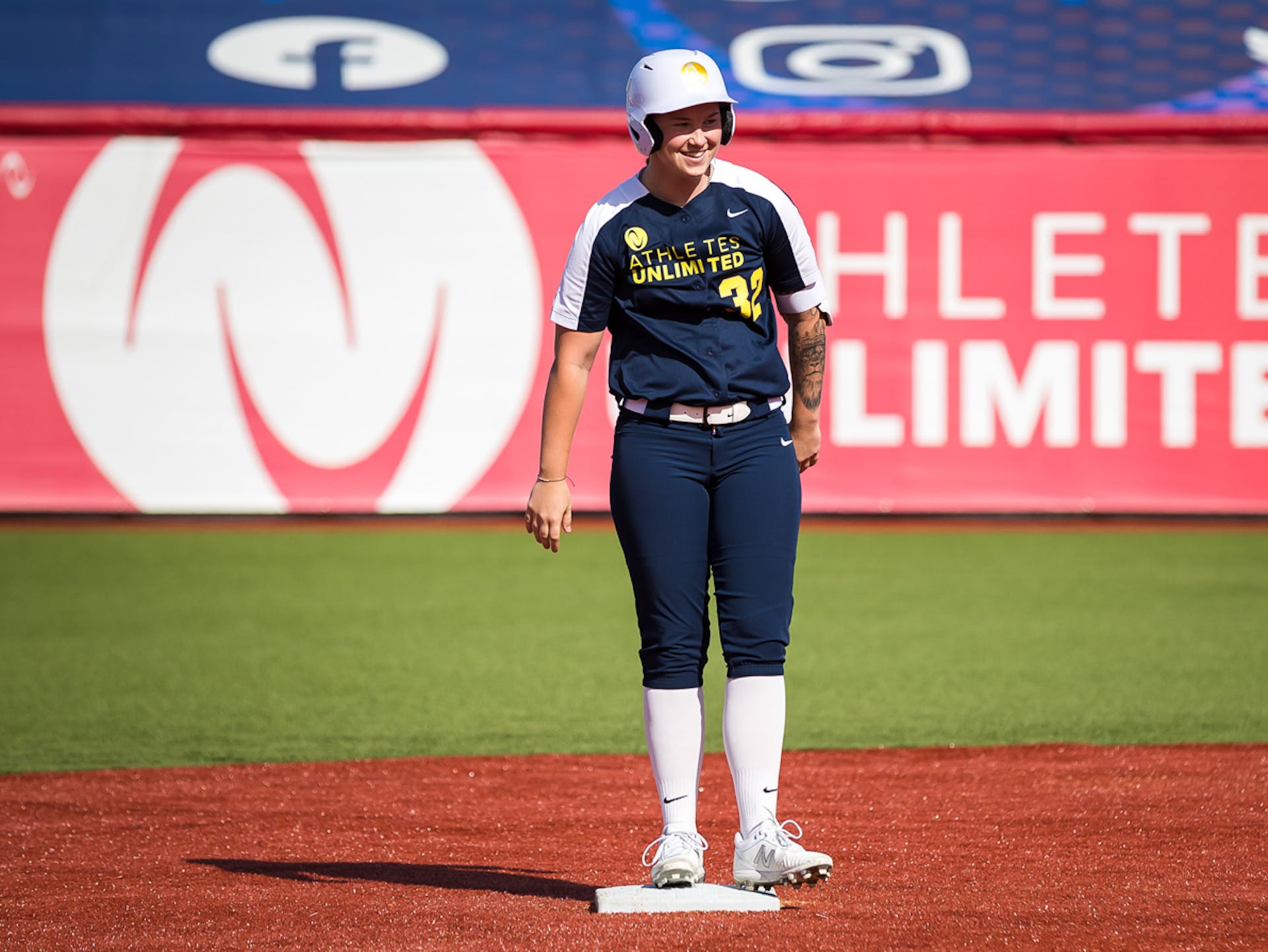 Lilli Piper is not new to Athletes Unlimited, but she did manage to say, “Hello, again,” in a most emphatic way in June.

On the first day of open tryouts in Rosemont, Ill., Piper made her presence felt with a home run in her first at-bat before adding a walk and a triple in the same scrimmage game.

Over two days of tryout games, Piper went 4-for-8, including a double. That, along with her solid play in last year’s inaugural season, earned her an invitation back to play in Season 2, which gets underway on Aug. 28.

“It’s very relieving,” she said. “Obviously, I was working very hard for the opportunity again. It’s relieving, and I’m excited.”

Last season, Piper scored 1,300 points, placing her 22nd among the 57 players who took part in Athletes Unlimited Softball. She went 12-for-29 at the plate with three doubles, two homers and six RBI.

Still, she had to try out again. That may have given her a little extra incentive to perform well in June, something she wasted little time doing.

“I think [the evaluators] all knew that I actually belong here. But I just had to show my stuff a little bit more, which I completely understand. These are the best 60 players in the country, and outside of the country for that matter,” Piper said.

Piper credits her 2020 experience with Athletes Unlimited as helping her in what turned out to be spirited tryouts in two different settings. The first day’s scrimmage was held outdoors at the Parkway Bank Sports Complex. On the second day, rain forced the proceedings inside to the adjacent dome, and even that had to be evacuated for a few minutes as storm sirens sounded.

None of it seemed to faze Piper, who looked confident all weekend, both in the dugout and on the field.

“I would definitely say I was the most relaxed because I had been there,” she said. “I knew everything about what the dome was capable of and being outside, too. I was used to the field. I took that and used it to my advantage and used the experience I had with a lot of those girls already, especially with the two Player Executive Committee members (Jazmyn Jackson and Haylie Wagner) who were there, and I ran with it.”

Like most fans of softball, Piper spent the recent days watching the sport in the Olympic Games. Giving her a special sense of pride was how many of her Athletes Unlimited teammates were in Japan, not only on the United States team but also playing for Canada, Mexico and Italy.

The performances at the Olympics told Piper something about Athletes Unlimited and its players.

“That we’re very, very good,” she said. “We have the best of the best in the entire world. It’s definitely exciting, and I’m just super proud of the girls that I have been good friends with now and got to play with in the first season. I’m super proud of them and super excited to see softball back in the Olympics and to see the sport grow as much as possible.

The stands in Rosemont were empty last year because of the COVID-19 pandemic, but for the 2021 season, the plan is to have fans at the ballpark.

“I’m just excited for the fans to be able to share this experience with this,” Piper said. “I had an amazing experience in Season 1, and a lot of other people did. Just for people to be able to interact with us a little bit and to be able to experience the same things we have going on, as opposed to just watching it on TV, will be good.”

Lilli Piper sends one off the scoreboard to get Team Osterman on it!

What a clutch pinch hit for @PiperSwiper.

As for her personal goals this coming season, Piper sounded like most professional athletes.

“Just to keep finding my way into the lineup,” she said. “I want to be a consistent player. I want to be on the field as much as possible. Just be a good teammate. I prided myself a lot on that last year. I just want people to know that I’m here and I’m here to support. Obviously if the team does well, I’ll do well. Just putting the team first regardless of what team I am on and just being consistent this year.”