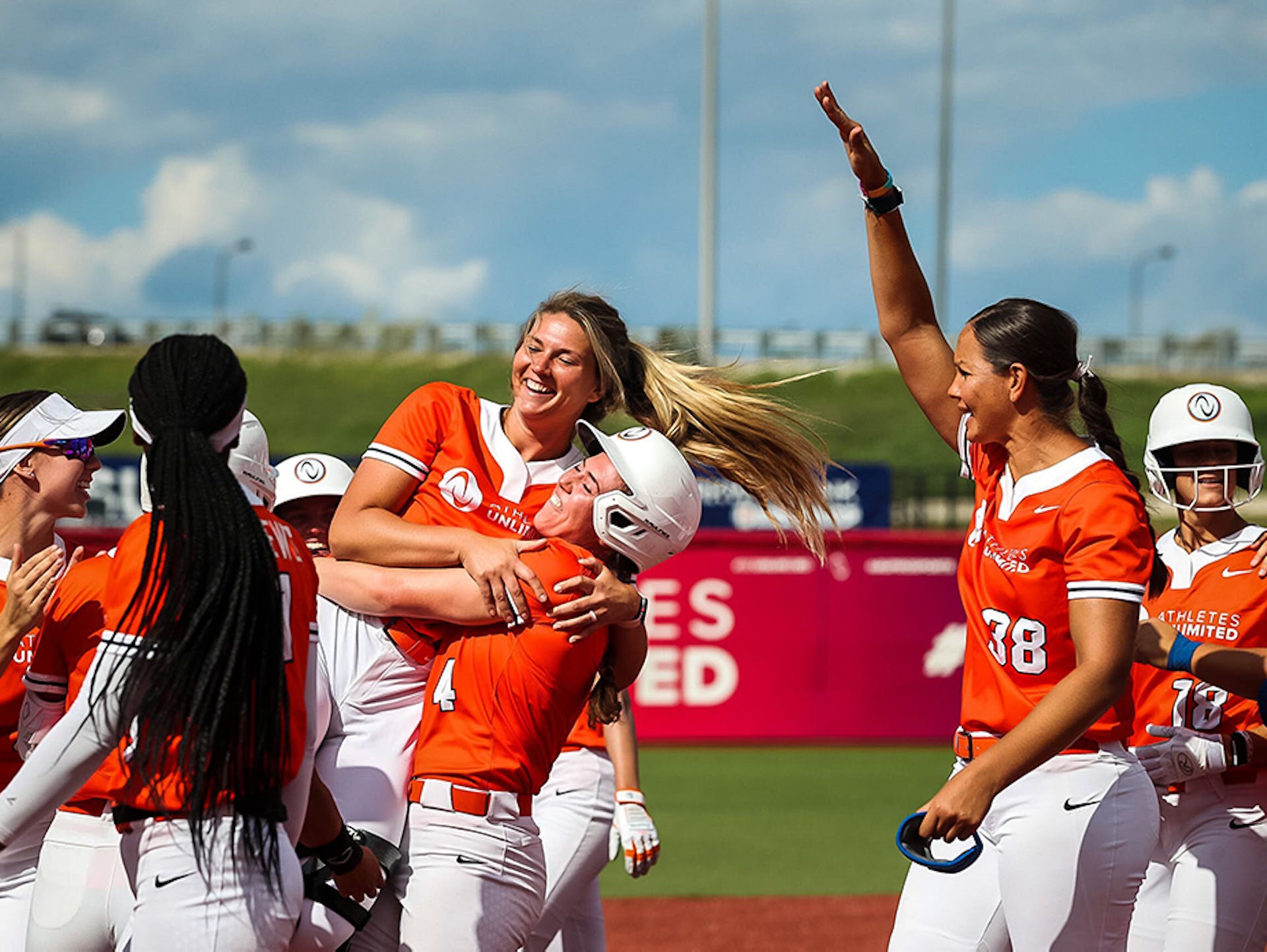 Go ahead. Try to find a more fascinating game in the short history of Athletes Unlimited Softball than Sunday afternoon’s 6-5 victory by Team Osterman over Team Piper. This one had everything from start to startling finish.

Down 5-0 in the second inning, Osterman’s Orange team clawed back with four runs in the bottom of the fourth, setting off a series of strategic machinations on both sides.

In the end, Anissa Urtez’s bases-loaded single to the gap in left-center against Aleshia Ocasio scored the winning run in the bottom of the seventh inning to put the perfect capper on a game that more than lived up to its advanced hype.

After all, this was the upstart Purple squad headed by Lilli Piper against the team headed by the biggest presence in the league: Cat Osterman.

“It was a dogfight on both ends,” said Urtez, the game’s MVP 2, earning her 40 extra points. “I don’t think we expected that to happen in the first inning (when Purple scored three runs). But we never gave up. Just continuing to trust each other and focus on what we bring to the table and not what the other team is doing. I think keeping that mentality really helped us thrive to the end, and we never gave up. I think it showed.”

This one looked like it would be a rout from the start, but sometimes a plot needs a little cooking to thicken.

And cook this one did.

Team Piper wasted no time jumping on Team Osterman starting pitcher Carrie Eberle, loading the bases on singles by Kelsey Harshman and Ali Aguilar and a walk to DJ Sanders. Sashel Palacios drove the first run home on a groundout and after Caleigh Clifton walked,  Ocasio hit a two-run single.

Aguilar hit a two-run double in the second to make it 5-0 and force Osterman to pull Eberle in favor of Randi Rupp. That move would prove pivotal.

Team Osterman began its comeback with four runs in the bottom of the fourth. Jessi Warren led off and got a ball up into a jet stream that was blowing out to right field. Ocasio, playing right field at the time, never gave up on the ball, but it cleared the wall for Warren’s second homer of the season and second in two days.

Team Osterman added two more later in the inning on a double to the gap in left-center by Jordan Roberts (MVP 3).

Warren is no stranger to being a captain in Athletes Unlimited. So she knew things weren’t over – not by a longshot.

“Even after the five runs in the first and second innings, going into the next couple innings knowing that we had a whole game left, five innings, we were all just staying in the game,” she said.

The MVP 1 and 60 additional points went to Rupp, who improved to 2-0 with 5.2 innings of scoreless one-hit ball. On more than one occasion, Osterman began throwing in the bullpen, but Rupp did not falter and perhaps saved valuable pitches in Osterman’s arm that may be needed Monday.

“I’m excited,” Rupp said. “The biggest thing for me is just to go in and test the defense and do my job. I was just going inning by inning. I wasn’t thinking about going the full game. I was just trying to go out there and make the defense work and stay confident and attack the zone.”

Piper pulled out the stops, too. Even though Ocasio pitched a complete game Saturday, Piper brought her in to start the fifth inning, and she was sharp.

It also sent a message to Team Osterman that Purple was serious about this game.

“They wanted to win the game, but we just stuck to our plan, and it worked,” Urtez said.

The fateful bottom of the seventh began with Aliyah Andrews beating out an infield hit. Morgan Zerkle bunted with two strikes and was safe at first base on Ocasio’s throwing error, sending Andrews to third. Zerkle then stole second base, and when catcher Gwen Svekis’ throw ended up in center field, Andrews scored the tying run. Warren singled, and the dangerous Chidester was walked intentionally, even with first base occupied.

That set the stage for Urtez’s heroics.

“It actually brought me back to college,” Urtez said. “I would bat behind Hannah Flippen. They would walk Hannah Flippen to get to me. I had the mentality already being prepared from college experience. Kind of having that in the back of my mind – just hitting the ball, putting it in play and keeping it simple, looking for something to attack that was elevated to be able to hit it out of the infield. Just keeping it simple and sticking to my plan.”