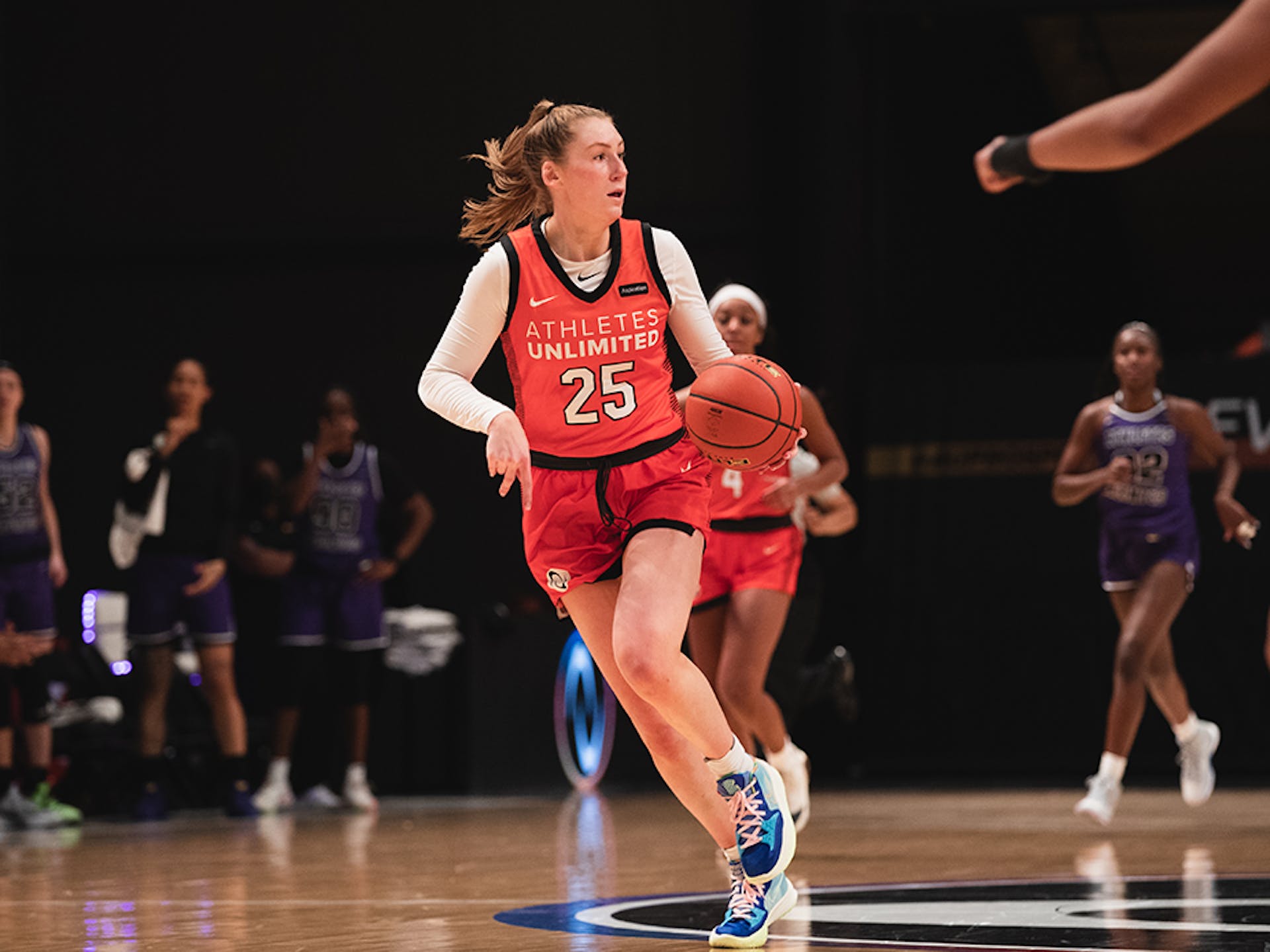 LAS VEGAS — As the Week 3 draft of the Athletes Unlimited Basketball league continued to unfold into the fourth round, Lexie Brown couldn’t help but laugh when Natasha Cloud hollered across the command center.

The Holy Cross alumna played on Cloud’s team during the second week of the season, one week after playing for Mercedes Russell, and was a part of Brown’s team during Week 3.

Not too shabby when three of the greatest players in the world who have won WNBA championships drafted you to be a key component for just three games over a four-day period.

And Manis has played her role exceptionally, averaging 9.3 points, 5.4 rebounds and 1.3 steals in 22.2 minutes over nine games this season.

“She’s a dawg,” Cloud said. “Her motor constantly goes. She does all the little things that won’t necessarily show up on the stat sheet. She’s a total team player. She can score in an abundance of ways. She’s a good defender, she gets up, she messes with the ball full court.”

And Cloud should know.

Manis’ two best performances to date, which happened to show up on the stat sheet, were a 19-point performance for Team Russell on Jan. 28 against DiJonai Carrington’s squad, which Cloud was a part of in Week 1, and a 17-point performance on Wednesday against Team Cloud.

“We were talking about it the other night, every time I got a rebound, Lauren’s hands were in there knocking the ball out of my hands,” Cloud added. “Those things don’t show up on the stat sheet necessarily, but she attacks every aspect of the game.”

Not surprising for someone who’s showed signs of passion for a basketball at a very young age.

“I think my first word was actually ‘ball,'” Manis said. “And (my parents) told me that when I was really little, they got me one of those mini basketball hoops. And I would go outside, and I would just keep shooting until I made it.”

Her parents, Gregg and Allison, did in fact confirm her first word while taking in a recent game at Athletes Unlimited Arena at Sport Center of Las Vegas, as they got to watch her play professionally for the first time in person, along with Manis’ sister Katie.

“We’re really happy for her,” Allison Manis said. “She loves the game. She works hard, and this is her dream.”

Said Gregg Manis: “It’s a treat, we haven’t seen her play live in close to two years. So to see her finally back out here on the court with this elite talent that we’re seeing out here, and seeing her participate and do her thing, very rewarding.”

Rewarding, after a long journey from Franklin, Mass. that saw her grind out and mature the ‘dawg mentality’ Cloud spoke of, through youth ball and Metrowest leagues, AAU teams, starring for Bishop Feehan High School and eventually at College of Holy Cross.

Her father said the number one lesson taught to their athlete daughters – Katie played softball – was to give maximum effort whenever you step on the playing surface, be it a hardwood or a diamond.

“Because that’s one thing you can control,” he said. “And if you give max effort you’re gonna be rewarded in some capacity.”

It certainly paid off in college, where Manis is arguably the most accomplished player from Holy Cross’ women’s basketball program, having eclipsed the 2,000-point and 1,000-rebound plateaus. She was selected No. 33 overall by the Las Vegas Aces in the 2020 WNBA Draft, but pandemic restrictions kept her out of training camp in Florida and she ended up playing professionally abroad for eight months.

Last year she was invited back to the Aces’ training camp, but once again found herself shining overseas.

“I don’t think it really hurt my ego,” Manis said. “I was just very disappointed that I didn’t get the chance to showcase my skills. You know, a weird year, the beginning of COVID and I realized a few days leading up to them initially releasing me, they released pretty much all the third-rounders. So I kind of knew that it was coming.

“But then I was fortunate enough that they brought me back last year and I was finally able to attend a training camp, which I was really grateful for.”

Manis said one of the most crucial things she’s taken from her trips abroad to play professionally has been the importance of mental strength and confidence, and how much those intangibles can affect her game.

“If you don’t have the confidence in yourself, then you’re not going to go out there and perform at your best on the court,” Manis said. “So it’s been tough, my professional career so far … but I really do feel like each and every day I’m getting a little bit tougher mentally.”

And considering the work ethic she’s brought from Holy Cross, it’s not only taught her how to carry out her parents’ instructions of working hard on the court but the genuineness of cultivating relationships and the importance of family. She chose to go to Holy Cross because she was closer to her family.

“So I think that’s key in my basketball career too, is their support,” Manis added.

For Manis, among 44 of the best competing in Athletes Unlimited’s inaugural basketball season, it’s been somewhat of a reintroduction to the player who shined in the Patriot League.

Forget an instantaneous moment of being awestruck when she arrived in Las Vegas for scrimmages and stepped into an arena with women she’s admired for years, and only dreamt of playing alongside, Manis overcame those first-day jitters and is proving she isn’t just playing with them – she’s one of them.

“I just go out there and at the end of the day I want to win,” said Manis, who has one double-double to her credit in eight games this season. “So any little thing that I can do on the court that will help my team win. That’s what I’m there for. I love diving on the floor, trying to get steals, tips, anything like that.”

One thing she has learned is the physicality is “a whole different level,” which was apparent Saturday night while playing for Team Brown, during a rough battle against Team Hawkins. Manis found herself on the court, literally on her back, maybe more times than she had the entire season.

Manis said she lost a lot of weight when she went overseas, and when she got to training camp realized she needed to put that weight back on because everyone was faster, stronger and tougher. Now, in game-time speed on American soil, Manis can feel the intensity with her own physical style of play during practices and games.

“These last few weeks have been amazing,” said Manis, who is playing for the Lone Survivor Foundation. “AU has done an incredible job with providing us everything we need, and the competition is insane. So I’m really happy that I’m here. I just want to let the game come to me, play my game, and I just want to win. But I think with all that, it definitely will show that you know I can compete with these girls, and I am at that level.”

From here, the next step is to find herself back into training camp, vying for a WNBA roster spot.

And there’s at least one WNBA champion who thinks it’s a no-brainer.

“Someone’s gonna pick her up, and if they don’t that’s a huge mistake,” Cloud said. “I think that she can come in. Clearly, she is ready to play in the W. She spent that year overseas, she got better, she came back and she’s proving herself in this league (Athletes Unlimited).”

"I will go into politics": Natasha Cloud charts a path toward change