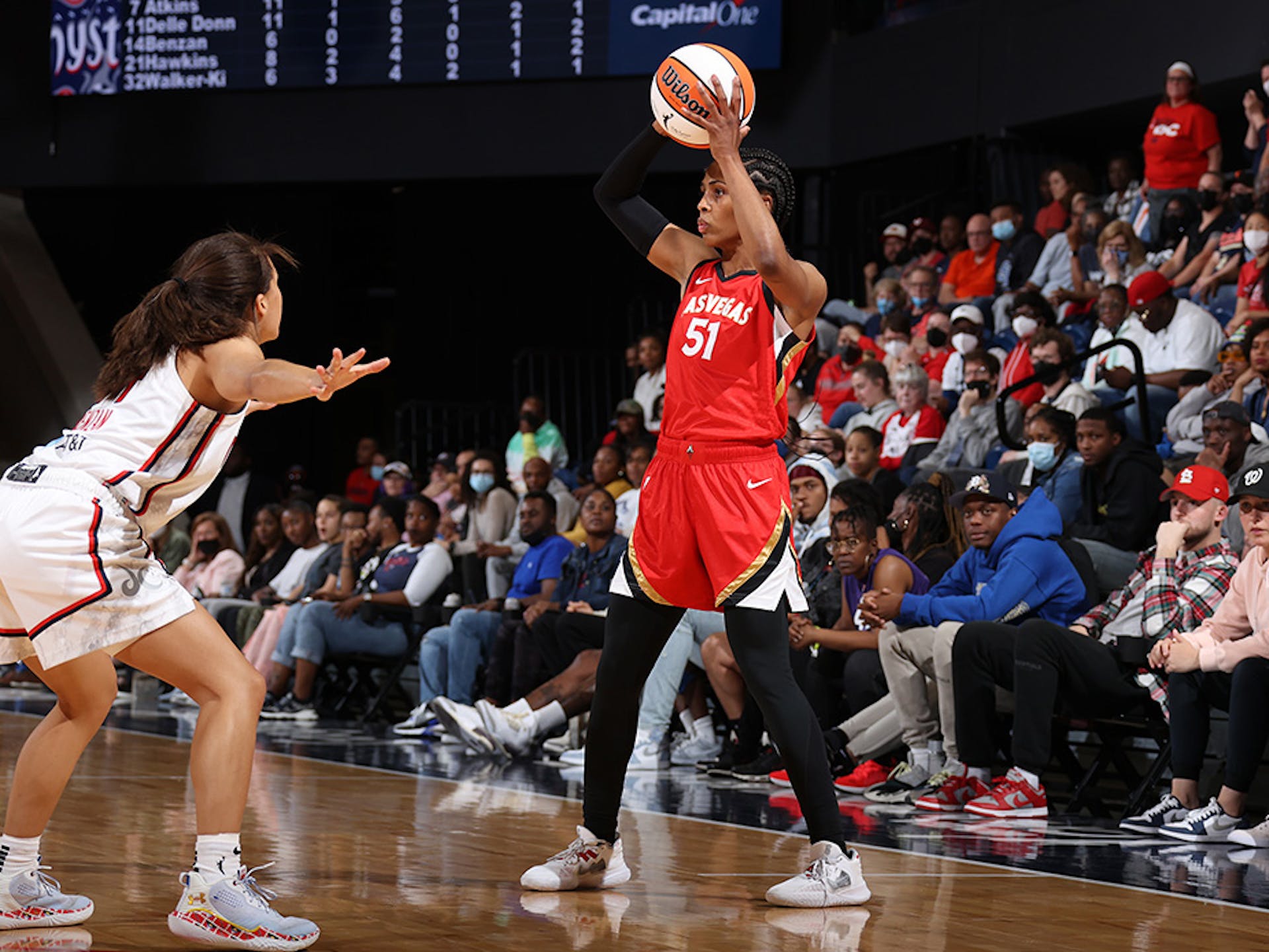 There was no reason to continue doing them over Zoom and she knew she wanted to continue the pursuit of another dream.

Then, an old friend beckoned.

Friend, as in the former team she used to lead to the court amidst an animated chant that alerted fans they were on their way.

Las Vegas Aces first-year coach Becky Hammon liked what she saw from Colson during the inaugural AU campaign when she finished 14th overall with 11.4 points per game, while also dishing 6.9 assists per contest.

Hammon was confident a 10-year WNBA veteran could come in and provide spark to a team that was pegged as a league favorite before the season began.

“You know what you’re gonna get with her night in and night out,” Hammon said. “She’s consistent in who she is. She’s consistent in how she plays. So we like her grittiness. We like her defense. Most importantly, I know she’s a veteran point guard who I know if we need to put somebody in that can get us into a set, it can kind of be the point man defensively for us as well.”

When asked about Colson’s return, 2020 WNBA MVP A’ja Wilson couldn’t help but reveal an ear-to-ear smile, knowing what the jovial veteran would provide.

“Syd is a great locker room girl,” the three-time WNBA All-Star said. “She’s someone that is just really good at what she does. She’s a pro at what she does. And it’s amazing how she can bring people together with laughter. The things that she says in our locker room, it really just kind of lightens the mood sometimes and you need that.

“But let’s not get it twisted, Syd also belongs here. She shows us every day that she could be at this level.”

Chelsea Gray has played in the WNBA since 2015, she won a title in 2016, and she’s a four-time All-Star. She knows the type of player and character that brings success to a team.

Gray said the combination of Colson’s personality and competitive nature is a benefit from the top of the roster to the rookies on the team.

Gray said that as much as she keeps the mood light in the locker room, Colson pushes players in practice as if she were the starting point guard, forcing their hands during rotations, making unconscious calls and staying vocal with encouragement.

“She doesn’t get in the game, but we know what she’s capable of and she’s on this team for a reason,” Gray added. “She just makes everybody laugh and enjoy coming to work every day. It’s a grind during the season … but we have fun with it and she’s a big part of why.”

And Hammon knew it and was confident about it since Colson re-signed with the team on March 2.

“She’s a big part of the heart of the team,” Hammon said. “To her credit, I know I cannot play her for two, three games, and when I put her in there, she’ll be solid enough. So that’s a skill set as a pro. That’s why she’s here. The whole entire locker room just loves her. That’s who she is, and we appreciate all the energy that she puts in, and also into her teammates.”

She's a big part of the heart of the team... We appreciate all the energy that she puts in, and also into her teammates.
Becky Hammon,
Las Vegas Aces Head Coach

As boisterous as she can be, Colson is equally low-key and doesn’t need to hear about herself.

It’s flattering and she appreciates knowing her infectious humor and glowing personality reverberates, but it’s not about her, it’s about uplifting those around her.

“I like for people to come around me and bring positive energy, and so I try to just make sure I’m always doing the same,” Colson said. “Like walk into a room, speak to people, ask people how they’re doing, joke around with people, just kind of have a fun-loving relationship with everybody.”

Colson, 32, has taken the time to learn how personalities blend to make one unit. For some, it’s about cracking jokes on teammates. For others, it’s a more serious approach. Her role, she’s always felt, is making each and every player on her team — or, from an Athletes Unlimited standpoint, in the league — feel like they’re part of the journey together.

“Finding some joy off the court, even though we have a lot of fun on the court, it’s nice to be in the locker room and just talk about non-basketball related stuff and click in that way,” Colson added. “That’s just who I am, just always try to bring smiles out of people and laughs and have a good time.”

Which she’s looking forward to during the second AU campaign.

As the chairperson of the Athletes Unlimited Player Executive Committee, and one of the pioneers who helped recruit the first-ever league-wide roster, Colson became a fan favorite in 2022.

She also became a sought-after player for the weekly captains who saw in her what Hammon saw when bringing her to Las Vegas.

Colson was never drafted lower than 17th in the 44-player league, and only once was taken outside the top 12. She finished 12th overall with 4,162 points, while her 104 assists ranked second in the league.

I like for people to come around me and bring positive energy, and so I try to just make sure I'm always doing the same.
Sydney Colson

AU became something she was proud to introduce, not only because of the camaraderie but for what the league provided for 44 of the greatest women basketball players in the world.

“I think a lot of players who were there, nobody has been like a big star in the league or been like ‘thee’ person on their team,” Colson said. “The closest probably, Washington Mystics stars Natasha (Cloud) and Tiana (Hawkins) both won championships in D.C. But other than that … people (were) still like, ‘I have another part of my game that I want to show. I want to show that there’s more to my game than maybe what my own coach or what other people have seen.’ So it was an opportunity for people to play against other WNBA players and some good overseas players and be competitive every quarter.”

Little did she know, not too long after she performed her first stand-up comedy routine and was in pursuit of another dream on the big screen, her game veered back to the W because of the person she was on and off the court.

“I’ve loved it, I’ve enjoyed it,” Colson said of her return with the Aces. “There was obviously a familiarity because back in Vegas, some old teammates were there, but then there’s also the different staff, new teammates, new people around the organization. So, although it felt the same, it also felt new, and I just really liked the energy that our staff infuses into our players and into the locker room.

“So it’s easy for me to just be myself and encourage people and be ready when it’s when it’s my opportunity to step on the floor. And if it isn’t my opportunity, (I) lift up my teammates. It’s pretty much the same way I’ve always been honestly.”

As Gray said, the type of player and character that brings success to a team.