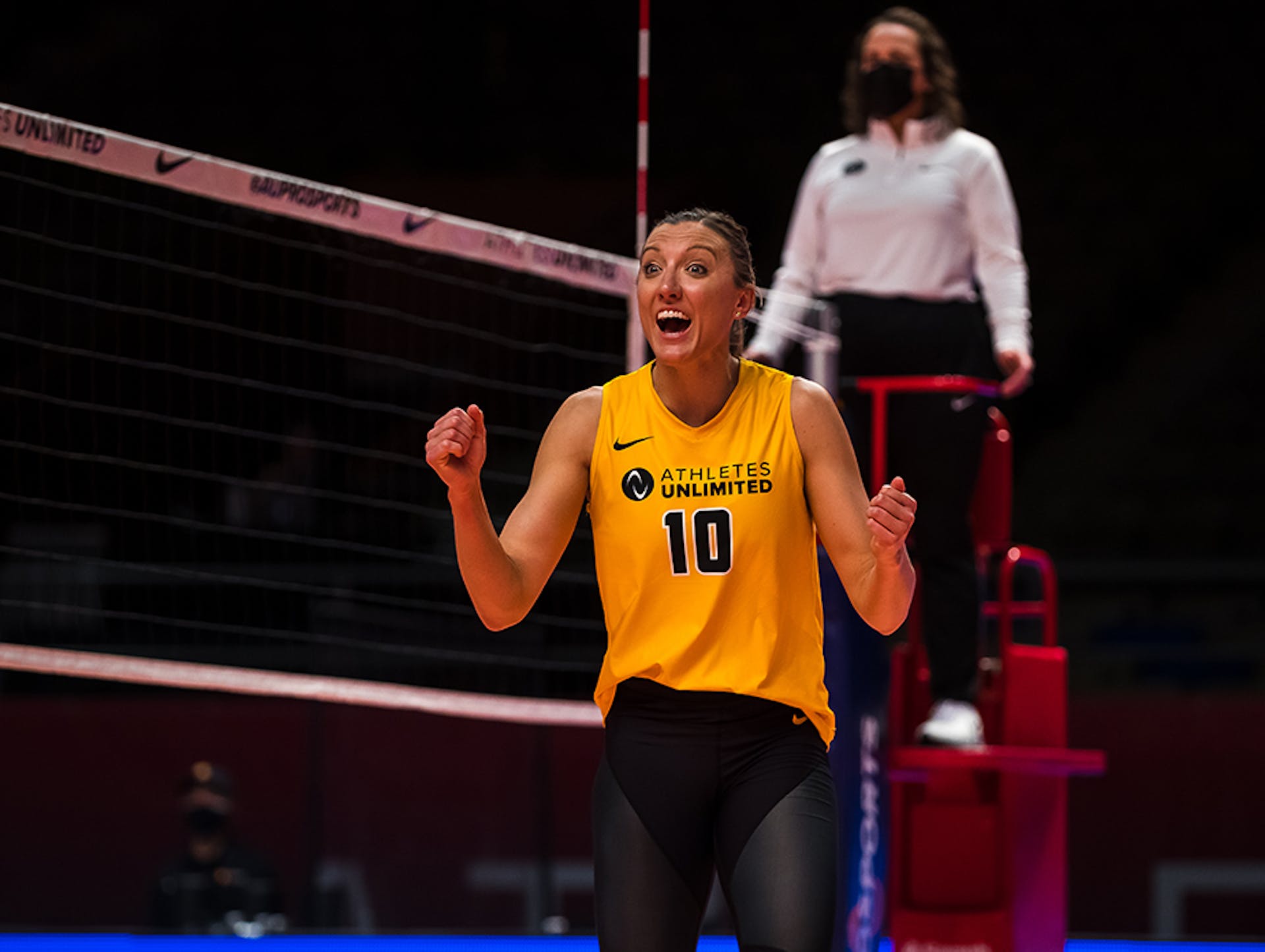 Larson entered the match with a significant 822 point lead over Bethania de la Cruz. She picked up another 306 points in the match, with 116 stat points from 10 kills, 17 digs, one block, and three aces, MVP 1 honors, and 80 win points. She finished the inaugural season 4,569 points overall.

As a member of the Players Executive Committee (PEC), Larson played a fundamental role in establishing the league. She admitted she was hesitant to believe she could win the championship because she was unsure how her PEC role would impact her level of play.

“Honestly, I thought that because of how much I was involved with the little details off the court, that it’d be more of a distraction for me,” Larson said. “As a captain of our team, I take on a lot of responsibility, and I didn’t know with recruiting players [to the league] how that was going to add to the stress of it.

“But in general, I was able to ride that wave of emotion and maintain it more than I expected. I’m shocked by how I was able to handle it.”

Entering the match, De la Cruz sat at No. 5 on the leaderboard. She trailed Brie King by 234 points, Aury Cruz by 141, and Karsta Lowe by 125. However, De la Cruz overtook all three players as her team accumulated 100 win points for their set and match win. Individually, De la Cruz had 104 stat points and was voted MVP 2 for an additional 40, placing her at 249 for the match. De la Cruz finished at No. 2 on the leaderboard with 3,690 points.

Setter Brie King finished at No. 3 with 3,675 cumulative points. The only non-outside to finish in the top four, Team King went 3-0 in matches for the weekend. King entered her final match earlier in the day at No. 4, but an incredible three-set victory over Team Lowe gave her enough points to elevate her position.

Outside hitter Aury Cruz finished at No. 4 with 3,582 points. The outside hitter entered Week 5 ranked eighth on the leaderboard, but her success with Team King allowed her to improve her position to fourth. Cruz set a new kill record with 26 in her match against Team Larson on Sunday evening, and she finished the weekend with 53.

The final match of the season was hard fought from both teams Team Larson (Gold) and Team De la Cruz (Orange) remained close throughout Set 1, until Team Larson finally pulled away late, winning 25-20.

In Set 2, Team De la Cruz won 25-16. They entered the set looking more comfortable than they had previously and made fewer ball control errors. With the improved ball control, setter Kelly Hunter was able to more easily run her offense.

For the set, Team De la Cruz had five blocks, with Ali Bastianelli earning four. The large number of blocks made it extremely difficult for Team Larson’s hitters to find the floor. With outside hitter Erin Fairs serving, Team De la Cruz extended their lead to nine, leading 22-14 when her run was ended by a Sybeldon slide kill.

Yet, Team De la Cruz maintained their large lead, and at 24-16 a perfect pass in serve receive from libero Nomaris Vélez Agosto allowed Hunter to easily locate De la Cruz, who finished off the set with a hard-hit kill.

In Set 3, the two teams went point-for-point early in the game, but Team Larson built a six-point gap midway through the set, leading 15-9. Two kills and a block from Odina Aliyeva put her team back within three at 13-16. Although they still trailed in set points, Team De la Cruz was ahead by one point in the overall match.

The lead was short-lived, as two consecutive kills from De la Cruz and a kill from Ebony Nwanebu, put their team at 22-20.

Yet, Sheilla had more in store to finish out the season, getting one block and three kills to give her team the set win at 25-23, but Team De la Cruz captured 60 points from winning the overall match 68-66.

Vélez Agosto played a fundamental part in Team De la Cruz’s match win and was voted MVP 3, earning 20 additional points, and finished the match with 192. She completed the match with 13 digs and a .670 positive passing percentage in serve receive. For her incredible defense throughout the season, Vélez Agosto was voted GEICO Defensive Player of the Year by her peers and members of the Unlimited Club.