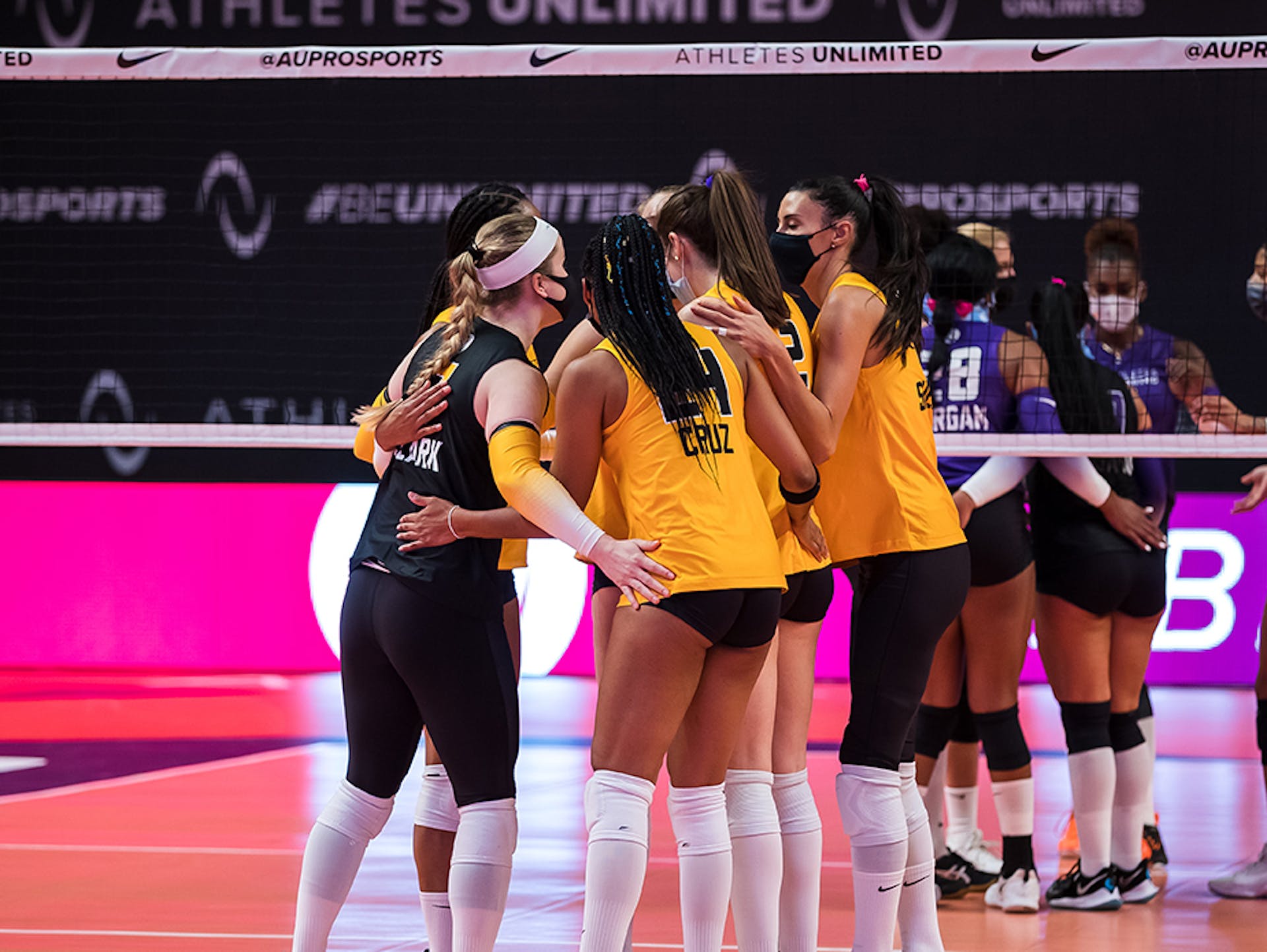 That’s how the memories will be for anyone involved in the 2021 Athletes Unlimited Volleyball season.

Before the first ball was served on Feb. 27, 2021, for the inaugural season, Athletes Unlimited players, staff and associates, along with residents of the Dallas area, staged a triumph of teamwork, spirit and patience.

Things seemed to be all set for a smooth opening to the launching of Athletes Unlimited’s second sport on the heels of a successful softball season in August and September of 2020.

But instead of hearts, hugs and kisses, the Valentine’s Day period in Dallas served up a five-inch snowstorm along with ice, leading to power outages that left the store shelves empty, the gym cold and players shivering as they tried to skitter their way across frozen streets and sidewalks.

Pulling together, athletes and support people scoured the stores, worked to get the heat turned and tried to keep players safe and healthy to play.

And, oh yes, all of this was going on in the middle of the COVID-19 pandemic.

Somehow, some way, they succeeded, and the behind-the-scenes work to start the season was nothing short of heroic.

“I think Athletes Unlimited, in everything it does, is a triumph of teamwork,” said volleyball player Cassidy Lichtman, chair of the Player Executive Committee and a member of Athletes Unlimited’s Board of Directors. “It takes a lot of people to put that together. But to do it in the middle of a pandemic, in the middle of an unprecedented, historic snow-and-ice storm, was definitely proof of an organization that can adapt and a lot of people who are willing to pitch in when needed and come up with solutions.

“The gym was very cold for a few days of practice sometimes. We were just trying to get off the ground at that point. Even at the end of the season, which is only five weeks later, it felt like so long ago that we got through that because the season went so well. Looking back on the preseason and having to deal with all of that, it was a testament to everybody that they were willing to deal with whatever adversity was thrown our way.”

Because of the pandemic, many of the volleyball players arrived in Dallas to get into playing shape after being idle for some time.

“We’re usually a week to 10 days that we bring players in to prepare for the season,” said Cheri Kempf, Athletes Unlimited’s Vice President of Broadcast and Director of Sport, Softball. “We extended that to two weeks, and some of the players had even arrived one week earlier to make it three weeks. So players were desperate to be able to work out to get into competition shape … Our concern was injury and just their preparation to be able to compete at that high of a performance level.”

Once the storm hit, with all its complications, adjustments had to be made for the care and feeding of the athletes as well as finding practice time.

“Because of the storm, coupled with the pandemic, food was really scarce,” said Karen Ashnault, Senior Vice President, Brand Experience for CSM, a company that has worked with Athletes Unlimited since the beginning. She was in charge of Athlete Experience for the volleyball season. “I was one of a few people who was allowed to go into stores, and that was because I had just gotten COVID a week before, so I was technically safe. But the athletes were not allowed to go into the stores, and you couldn’t do Uber Eats or any of the delivery services. They were all shut down because of the storm.

“The second was, we had our challenges with the temperature and the rolling power outages because of the storm. Whatever grid you were on determined when your lights would go off and on and your heat. It was the safety of the athletes, getting back and forth because Dallas was not used to snow. There was tons of black ice. The concern of them safely being able to go from the hotel to the venue, practice and return was on the top of all of our minds, and a couple of times we canceled practice and the players were not happy with us. But we always have to put their safety first.”

Through it all, there were other people to think about. Everyone involved remained mindful of that throughout.

“While we were considering ourselves, we also had to consider that we were working with people who lived in Dallas and were dealing with their own things,” said Kathleen Joyce, Vice President, Production, CSM. “Our venue manager, her pipes froze. So we couldn’t expect her to come and abandon her frozen home to come to us. It’s balancing all the pieces and then just having a positive attitude about, ‘Whatever we can do, let’s try to do it but try to maintain a really safe and healthy environment.’”

As far as getting the venue up and running, Joyce and her team sprung into action. One of her team’s biggest challenges was working through heating and ventilation issues in a building that had undergone renovations.

“The biggest challenge is setting expectations and being able to deliver as much as we could but always making sure that we were keeping people safe and healthy in a variety of ways,” Joyce said. “Healthy because COVID was going on. We didn’t want to be in close spaces. Healthy because it was cold in the venue as we worked through the heating problems. And safe because the roads in Dallas and Texas as we all know from that snowstorm were not safe.

“It’s finding the right balance of that. Everybody’s there. People have arrived. They’re ready to go. They want to play. They want to get out there …We made sure that players took safe routes if we were bringing them to the venue. We made sure that they came only during the daytime when it was light out and we could see things. We actually canceled an entire day because we deemed the road conditions not safe enough for anybody to be on the road.”

Every athlete has the leeway to make their own decisions about what they wanted to do and how their body felt.
Cassidy Lichtman,
Volleyball

All the while, the lines of communication remained open. If plans made on the fly were going to work, everyone had to be on the same page and talking.

“A lot of it was on us on the PEC to be constantly communicating with the player groups so that they knew what was happening and also with the rest of staff to figure out what was possible,” Lichtman said. “Each day, a few times a day, we were checking in with staff to see what the update was, whether or not we could go to the gym based on the roads – were they drivable? Was the gym warm enough? Were the lights on there?

“If we couldn’t get to the gym, what did we have available at the hotel? Was there a room we could use? Could we get a yoga session going? There was a lot of quick decision making and updates from the staff to us and back and then coming up with best solutions.”

Once players got to the gym, routine practices weren’t so routine. That, too, involved adapting to the circumstances.

“It’s certainly a challenge, getting your body warm enough that you feel comfortable playing, that you’re not going to get hurt,” Lichtman said. “Obviously wearing layers was part of it. At one point, I was practicing with gloves on because it hurts your hand to hit a ball when it’s really cold.

“And also giving players leeway. One of the great things about Athletes Unlimited is that the players have such a strong voice … Every athlete has the leeway to make their own decisions about what they wanted to do and how their body felt.”

Ashnault credited the players’ willingness to adapt for making things run as painlessly as possible.

In the end, the weather warmed, players prepared and the Athletes Unlimited Volleyball season proceeded as expected – that is to say, successfully.

“It was touch and go,” Ashnault said. “The season was going to happen. It might have had to have been shortened if we couldn’t get the players in for sufficient practice, but it would have happened.

“So I think after the first weekend when it all happened on time and everyone was healthy, that was a big celebration. I think at the end of five weeks, everyone was sad because you’ve seen the way the athletes are together. A lot of them have known each other as competitors but not as teammates. They spent so much time together and in a COVID world, not being able to go anywhere else. They really created a bond.”

As for heroes, there were many, including the players and those supporting them. Kempf also recognized Monica Paul, Executive Director of the Dallas Sports Commission, for “being in communication several times a day” and Baylor Scott & White, the Baylor medical facility for being “spectacular.” And there were others whose names never made the headlines.

“For a week to 10 days, we were challenged with getting the air flow right and getting the heat right in that venue,” Kempf said. “The nature of Athletes Unlimited, when we go into a market, our (athletic) trainers are super important.”

Season 2 of Athletes Unlimited volleyball is almost upon us. Whatever challenges come, bet on them being met, based on last year’s weathering of the storm.

“It really showed me a lot, especially for an organization as young as Athletes Unlimited – AU was maybe a year old at that point; they had their one season of softball, and I don’t think they dealt with anything like this,” Lichtman said. “But to me, it’s impressive for an organization to be that agile and adaptable when you really haven’t done this before, when you’ve never run a volleyball season before. So to me, it was the staff’s ability to create the best possible scenario for us given Mother Nature and whatever she was going to do.”

Our Lacrosse Athletes and their Causes