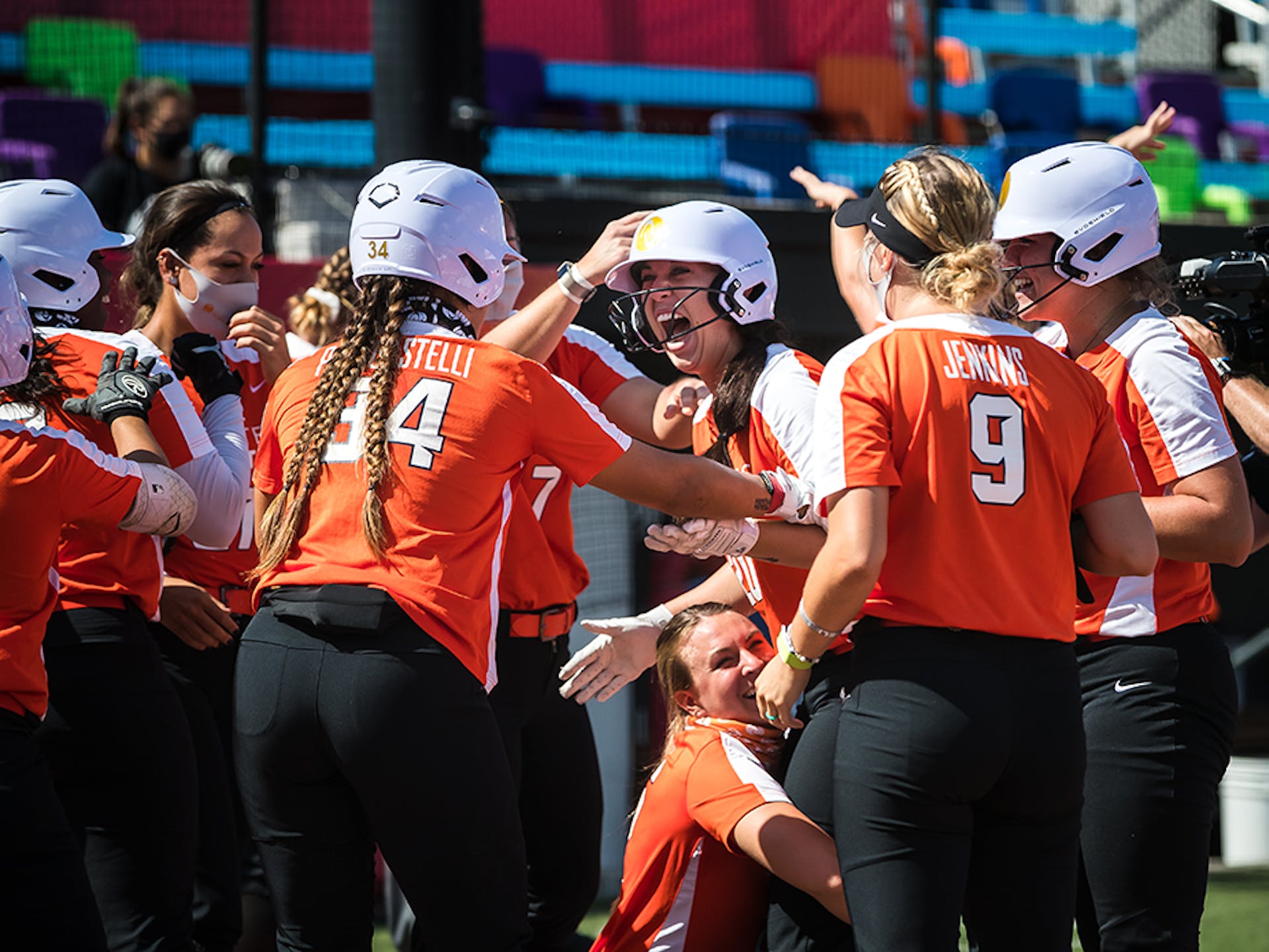 Clifton spent much of a sunny Sunday afternoon observing opposing relief pitcher Danielle O’Toole change speeds while completely shutting down the potent lineup of Team Piancastelli from the third inning and heading into the bottom of the seventh.

But when Clifton stepped to the plate with two runners aboard and her team trailing 7-5, she knew just what to look for.

When it came, Clifton made no mistake. Instead, she made her own walk-off moment with a three-run homer to cap a four-run rally and lift her team to a dramatic 8-7 victory over Team Reed before an ESPN2 viewing audience, giving Athletes Unlimited quite a showcase game.

“I just think that Tooly is an amazing pitcher,” Clifton said. “Up until that point, I think she had a lot of us hitters just guessing, and I kind of learned from my first at-bat and stuck with my plan for my second at-bat, and it just kind of paid off.”

What was Clifton looking for?

“Something softer, a changeup,” she replied without hesitation. “She does a great job of mixing speeds and keeping batters kind of guessing. She comes with that changeup.”

For her heroics, Clifton took MVP 1 honors for an extra 60 points on top of the 50 stat points she earned for the homer and a third-inning walk. She also took home 70 inning and win points.
The way this game was going, it had all the makings of a 16-15 slugfest.

Thanks to O’Toole and Team Piancastelli reliever Karissa Hovinga (MVP 2 and 40 extra points), things settled down in the middle innings.

Team Reed jumped to a 3-0 lead in the second on a three-run homer by No. 9 hitter and catcher Aubree Munro off Taylor McQuillin. Nadia Taylor brought Piancastelli’s Orange team within 3-2 in the bottom of the inning with a two-run homer right after Morgan Howe singled.

In the top of the third, Hanna Flippen and Tori Vidales hit back-to-back homers off McQuillin before Piancastelli went to the bullpen and brought in Hovinga, who was just as solid as O’Toole in the middle innings.

Hot-hitting Megan Wiggins hit a two-run homer in the bottom of the third before Reed’s team scored single runs in each of the fourth and fifth innings.

O’Toole looked loose as she took to the circle in the bottom of the seventh, but an error on Wiggins bouncer by Flippen and a hit batter quickly gave Team Piancastelli life.

“I think, honestly, the way AU has set this whole thing up, going into the inning, just thinking about winning the inning, we knew we had the chance,” Wiggins said. “We shut ’em down. Having the chance to win just one inning, when I went to bat, it wasn’t, ‘Let’s win the game here. Let’s just win the inning,’ and do whatever it takes to get on base and get the inning started.”

O’Toole got a strikeout and a force-out before Taylor (MVP 3 and 20 extra points) hit an RBI single, setting the stage for Clifton.

“Right before that at-bat, our captain, Erika, came up to us and was like, ‘Guys, we really have nothing to lose,’” Clifton said. “What do we have to lose, right? So I just think with that mentality, the game is not all on my shoulders. There were at-bats before that, things before that. Just trying to do my job and honestly, trying to pass the bat to the next player.”

Captain Janie Reed’s team managed to win 50 innings points. In addition to her 40 points for the home run, Flippen added 10 with a walk and 10 with a single.