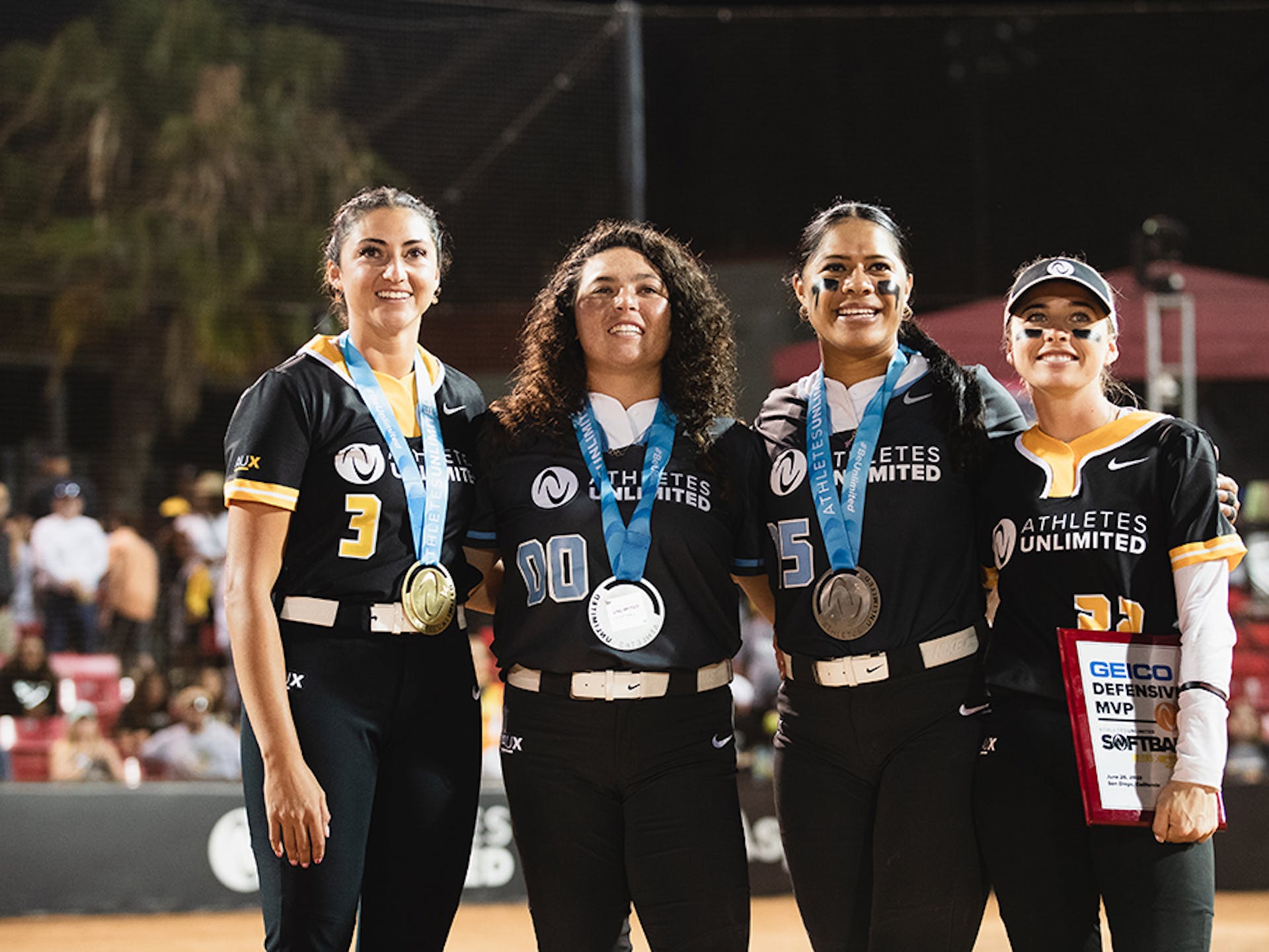 For a season intended to be intense and fast-paced, the leaderboard followed suit.

Danielle O’Toole earned the title of the inaugural AUX Softball Champion with 1,436 points as Team Fischer defeated Team Zerkle in a thrilling finale, which saw the teams battle through 10 innings and was capped by a walk-off grand slam by Courtney Gano.

Team Fischer’s victory cemented O’Toole in the top spot on the leaderboard.

It was the tightest finish the league has ever seen in any sport; first and third place were separated by only 68 points.

O’Toole emerged as one of the strongest arms during AUX and threw the first complete game of the season. In nine appearances, she logged 18 strikeouts and held opponents to a .206 average. She finished with a 1.69 ERA.

“It’s kind of wild,” O’Toole said. “I just didn’t expect any of this to happen. I just knew I was gonna go out and grind and compete, but this, this was not, this was not even close to being in my head.”

As a first-time captain in Series 3, “Tooly’s Tajins” went 3-1 and was one of few teams to win both games of their doubleheader day.

O’Toole, who opened up about her mental health journey earlier this year, said she felt “free.”

“It is so hard to come out of the dark. Being in the dark for so long, and coming out and feeling so free, I can breathe. It’s a great feeling. So just translating that in the mound, that’s exactly what it feels like. Like I can breathe.”

Trailing behind O’Toole and finishing with 1,422 points in second place on the leaderboard is fellow hurler Rachel Garcia.

In her first season with AU, Garcia earned points in the circle and at the plate. She posted a .333 average, drove in nine runs and tied for the league-lead in home runs (3). Garcia ranked second in strikeouts (25) and earned the most MVP points (320) of any player, receiving MVP 1 honors five times and MVP 3 once.

Finishing in the No. 3 spot is catcher Dejah Mulipola with 1,368 points. Mulipola had 13 hits, including three home runs, a double and a triple. She plated 11 runs and had a .325 average. She ranked second in MVP points (240) behind Garcia.

Each of the players received a medal designed and hand-fabricated by Lisa Issenberg, founder of Kiitellä, inc. Kiitellä is a Finnish word meaning “to thank, applaud or praise,” and Issenberg is committed to being a responsible steward of our environment, with each step in the process, from design to fabrication to delivery, using minimal energy and material.

Also earning a medal for her performance this season is Sis Bates, the AUX GEICO Defensive MVP.

Bates was a walking highlight reel, making seemingly impossible plays from shortstop and turning what should be hits into outs. She had 21 putouts and .952 fielding percentage.

The award was voted on by players, facilitators and members of the Unlimited Club. She received a $1,250 award in addition to her medal.

The inaugural season of AUX Softball was an expansion of the Athletes Unlimited model to give players more opportunities to compete throughout the year. Many athletes, including newcomers Aly Harrell and Sydney Littlejohn Watkins, will return for Season 3 in Rosemont, Illinois from July 29 through Aug. 28.

“Congratulations to Danielle O’Toole on becoming our first-ever Athletes Unlimited AUX Softball Champion, and to Sis Bates for winning the GEICO Defensive MVP award,” said Jon Patricof, CEO and Co-Founder of Athletes Unlimited. “AUX marked an exciting and successful new expansion for Athletes Unlimited that provided additional opportunities for athletes as well as for fan engagement, and we’re looking forward to replicating this model in the future.”