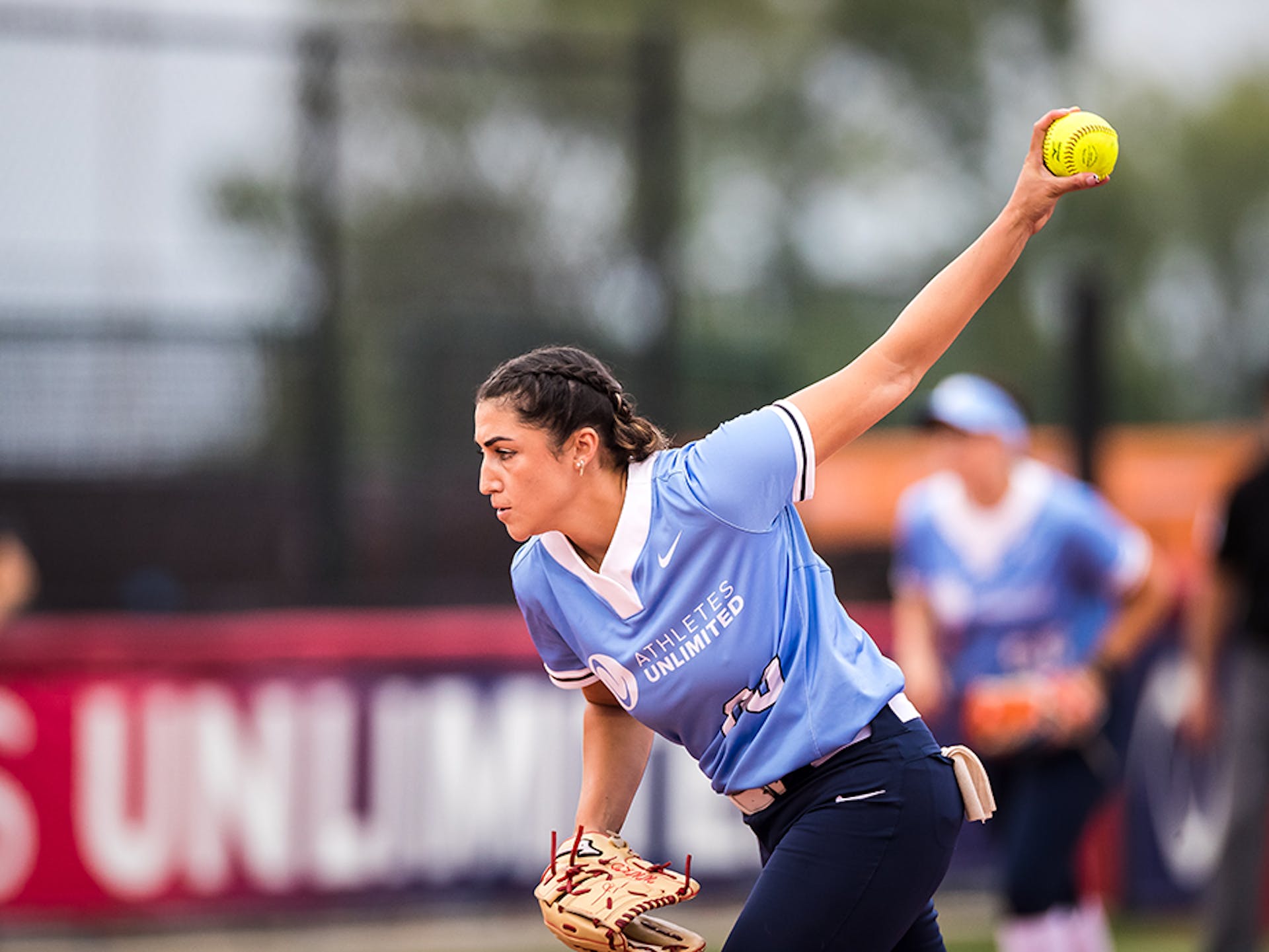 It was Winston Churchill who said, “If you’re going through hell, keep going.”

Danielle O’Toole went through hell, kept going and came out stronger on the other side.

O’Toole, a left-handed pitcher and veteran of the first two Athletes Unlimited Softball seasons, took advantage of May being Mental Health Awareness Month to go public with her struggles of a year ago, when she was preparing for the Olympics for Team Mexico.

In a tweet at the beginning of the month, she stated that she had suffered from “imposter syndrome, performance anxiety, general anxiety, depression, lack of self-worth and intrusive thoughts.”

She further tweeted that, “During my time preparing for the Olympics, we as a team went through some wild hoops. Emotional and psychological abuse.”

A year later, O’Toole says she’s in a good place as she gets ready for Athletes Unlimited AUX Softball in San Diego and Season 3 in Rosemont.

“Yeah, I’m good right now,” she said with a smile in her voice.

It’s because she’s in a good place that enabled O’Toole to go public with her story, especially with mental health getting special attention in May.

“It’s something that I have been an advocate for, for a while now,” she said. “But I think that now that I’m in a good place, I’m feeling OK to talk about it or to get responses about it or even do interviews like this about it. So I thought it was especially important after the past two months, when there have been multiple collegiate athletes who have passed away, and I believe two of them were by suicide.

“I remember in college it wasn’t really talked about. It’s not that we didn’t have the resources. We absolutely did, but it’s just not something that you ever heard.”

In fact, for many people – athletes and non-athletes – what they often hear is something not helpful and even counterproductive as it relates to mental health.

“I think our generation growing up, we heard a lot of, ‘Tough it out,’ or, ‘It’ll get better eventually,’” she said. “Sometimes for people it doesn’t. I wanted to talk about it, and I think it was good that I did. I had a lot of people positively respond, and I actually had a few people message me saying, ‘Thank you for sharing that; I’ve gone through something really similar, and I thought I was the only one.’”

O’Toole helped Team Mexico to a fourth-place finish in last summer’s Olympic Games, but what should have been a happy, festive time turned out to be a stressful one for O’Toole. On top of that, she had to deal with questions about why she couldn’t be happy about being part of the Olympics.

“Honestly, I don’t regret any part of going,” she said. “I don’t regret the way I played. I think I did everything I could, and I feel good about that. What I don’t feel good about is the journey to get there. I think that we as a team went through such trauma, and I think that it really tainted our experience. It was, ‘I love you guys. I love being here with you. I want to go to the Olympics with you, but I can’t wait for this day to be over because of how taxing it was and how traumatic it was for all of us.’

“I don’t think there was a day that went by when I was on the team that I didn’t cry. I’m already an emotional person, and I understand that. But it was really difficult. When you get there and you’re playing, it all kind of goes away when you’re playing, but there is stuff that happens, and you can’t ignore it. After we got home, it was a whole other different mess. It’s so hard for people on the outside. The question is, ‘Well, isn’t this what you wanted? You should be happy. Congratulations. This is amazing.’ I was like, ‘Yeah, it is amazing. Yes. Thank you. I’m so happy. I’m so grateful.’

“You come up with all these bumper-sticker answers because what you really want to say isn’t appropriate.”

Fortunately for O’Toole, she was able to draw on the help of a sports psychologist and a private therapist to help her begin to heal.

“I started seeing a sports psychologist, and she is amazing,” she said. “I started seeing her around March of last year, a few months before the Olympics started. I said, ‘You know what? I really need help. I’m struggling learning how to compartmentalize and understand what’s going on with the rest of my team. It doesn’t have to affect my performance or my competitiveness or anything related to that part.’

“And she really helped me kind of get through all that, use coping techniques. When the Olympics were over I waited about a week, and I reached out to a regular therapist, somebody who deals with emotional trauma. I started seeing her and have been seeing her. It’s just recently that my visits have dwindled because I feel good. It doesn’t mean that I’m going to stop going, but it means that I’m learning how to cope with things better.”

Today, O’Toole is looking forward to resuming her Athletes Unlimited career. In addition to revolutionizing play on the field, Athletes Unlimited also provides female pro players with more, including support and understanding for what they go through both on and off the field.

“It gave me room and space to kind of feel like I didn’t have to be the person that everybody thinks I am,” she said. “I don’t have to be that Olympic pitcher that everybody expects me to go out there and absolutely dominate. Last season, I was not in the mental health space to do that. I was feeling – I don’t even know how to express – I was feeling like in my soul that I did not want to do anything because I just felt sad. I don’t even know how to explain it.

“AU gave me a place to work through those feelings. Coming into this season, I feel a lot better … I might not perform as well as I want to. But you know what? I worked hard to get here. I worked hard to get to that good space. I think AU has given everybody that platform and just that ability to go out there and be free and play with no stipulations.”

O’Toole is sharing her story not only for her own good or for cathartic reasons. She said she wants to do it for others who may be going through hell and need to keep going. And she has plenty of good advice.

“I think that one of the worst things that I did with it is that I sat with it for too long. I sat with what I was dealing with by myself. I thought, ‘I’m just going to figure it out. I’m going to push through it. I’ll be fine.’ One day I was. I thought, ‘OK, maybe this is the day.’ And the next day it turns back into that black hole.

“So my advice would be, ‘Whatever you’re feeling is OK. Whatever you’re feeling is valid. Don’t hold it in. Talk to somebody. There are resources for you. You could literally talk to any random person, and I guarantee you you’re just going to feel better about it because you got it out.’ It’s like you just keep packing a jar full of all this stuff and eventually you can’t pack it anymore. Where does it go? If you unpack it, then you have a better shot at really, truly dealing with your brain and your health. It’s important.”