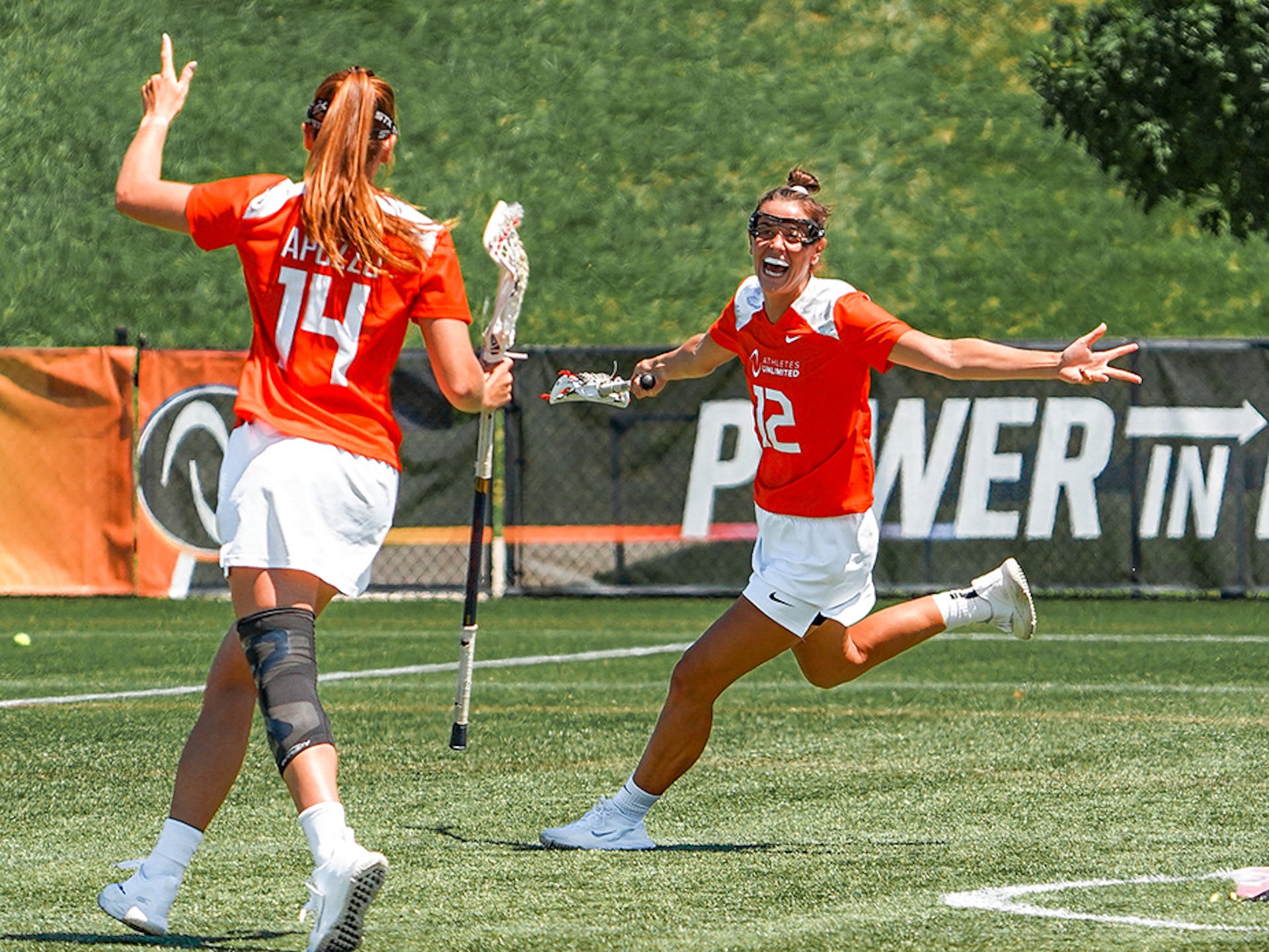 SPARKS, Md. — Before Saturday’s Athletes Unlimited Lacrosse game between Team Apuzzo and Team Glynn, goalkeeper Britt Read said in a television interview her team wanted to do whatever they could to keep captain Sam Apuzzo at the top of the league’s leaderboard.

Combine the team’s efforts on Saturday with Apuzzo’s four-goal outburst and the result is an 11-5 victory over Team Glynn at USA Lacrosse Headquarters.

The victory allowed Team Apuzzo to remain unbeaten at 2-0, while Team Glynn dropped to 0-2 with its second straight setback. In addition, the win kept Apuzzo in the driver’s seat for the league title.

Apuzzo, who entered Saturday’s action with a slim 20-point advantage over goalkeeper Taylor Moreno, extended the lead after banking 208 leaderboard points, including 45 points from being named the game’s MVP 1 selection. The former Boston College standout finished with four goals, including a natural hat trick in the fourth quarter, while adding two ground balls and 125 win points.

Midfielder Dempsey Arsenault followed with the MVP 2 pick following a three-goal performance with a ground ball and a caused turnover. Arsenault, another Boston College product, tallied 197 points to move into third place in the league standings.

Rookie midfielder Grace Griffin secured a game-high 212 leaderboard points on the strength of four goals with a caused turnover and a draw control. The former Maryland product, who bagged her first hat trick as a professional, claimed MVP 3 accolades.

Attacker Halle Majorana paced Team Glynn in the loss with three goals and an assist, while attacker Izzy McMahon and midfielder Ally Kennedy each struck for a goal and an assist. Goalkeeper Kady Glynn notched 11 saves in the setback.

After the teams exchanged a pair of goals in the opening quarter, Team Apuzzo scored five of the next six markers to take a 6-3 lead it did not relinquish. Team Glynn closed the gap to 7-5 with 6:34 remaining in regulation, but four straight goals, including Apuzzo’s natural hat trick, sealed the win for Team Apuzzo.

Apuzzo closed the game with a 228-point advantage over Moreno heading into Saturday’s second game between Team Moreno and Team Johansen. Defender Caroline Wakefield elevated her position on the leaderboard by 11 spots after finishing with six caused turnovers in addition to four ground balls.