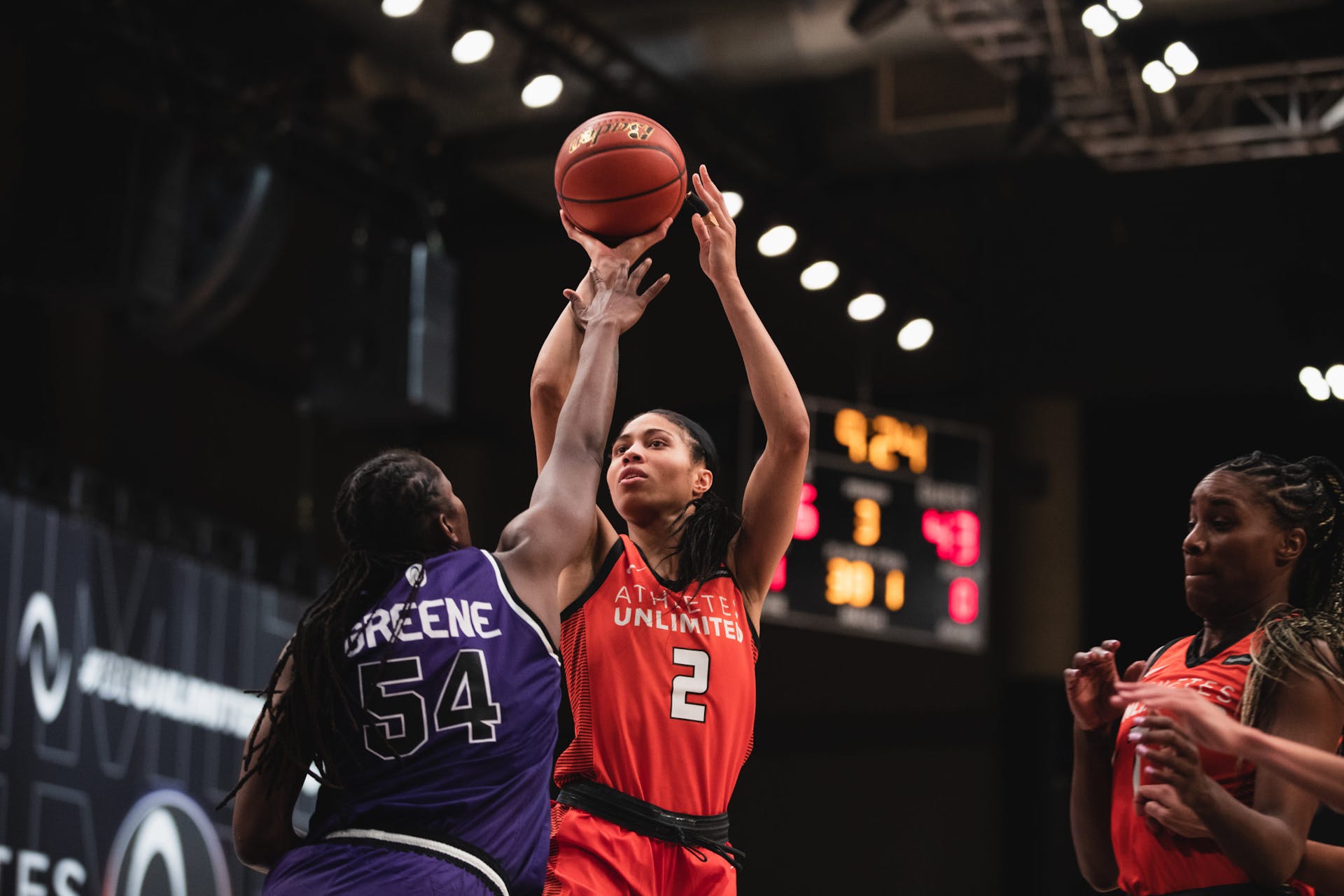 Isabelle Harrison is coming off of a perfect Week 3. After going 3-0 in purple, her win points combined with some stellar performances have pushed her into the No. 2 spot on the leaderboard and in the captain’s chair again. We join her at the draft after she drafted her third team this season. The players available this week on the draft board looked a little different than the previous. Harrison created a lot of chemistry with Odyssey Sims but after their success together in the Week 3, Sims was back in the captain seat herself. This meant Harrison needed to find a new point guard and  had an experienced backcourt duo available to be scooped up.

Instead of drafting her own team again, Lexie Brown was also on the board and Harrison jumped at the opportunity to bring Brown and Taj Cole over to her team.

“We started off with a lot of experience with Jantel, Taj, Lexie. I think that was a good base to start with,” Harrison said. “After that I wanted to pick people that I knew cared about defense, were character people and would just want to win no matter what.”

Post-draft is some of the only downtime the captain has during the week. When asked what she does to unwind and step away from basketball, she has a staple she must do every Sunday night: watch the latest episode of “Euphoria” on HBO.

“I’ve been on “Euphoria” heavy and it’s on Sunday. After this draft, I’m going to watch “Euphoria” and I don’t wanna look and see nobody except for Zendaya on my screen.”

And on Mondays, we rest.

Entering into Week 4 of competition, you can see the toll it’s taken on the athletes. While they’re still excited to play and give their full effort, it’s no easy feat to put your body on the line every Wednesday, Friday and Saturday for games. That’s why Harrison wanted to give her team off on Monday.

“I can just tell everybody’s is just tired. As I am paying attention to my own body, I’m also seeing what other people are going through too. I think that’s the biggest thing right now – for everybody to get rest and taking care of our bodies.”

But that didn’t mean it was a total off-day from basketball for the captain.

After starting her day taking her Yorkshire Terrier, Prince, for a walk, she dug into the film. She went back and watched games, not only to scout her opponents this week but also to understand what worked for players she had drafted to her own team, too.

Harrison spends each week focusing on getting her team to embrace the defense. She explained how at this point in the season, most teams are running similar offenses. Everyone has the capability to score. But coming out and playing defense with energy, aggression and intensity is how you win games.

She reflected on her time at the University of Tennessee playing for legendary coach Pat Summitt.

“I don’t think Pat had to make anybody buy in. She was just like, ‘This is what it is and this is my system.’ And you know, if you don’t feel comfortable with it – you might not – you probably won’t be successful.”

For Harrison, defense is a philosophy that she harps on every chance she gets with her teams. She’ll do a quick 20-minute review of their defense in practice, or call out certain players for good defense in timeouts.

Team Harrison started off the week challenged by Team Cloud and although they got off to a strong start, this game was decided in the final seconds.

The lead bounced back and forth between the two teams and Team Harrison flipped it again in the last few minutes. They trailed by a couple possessions with 1:56 seconds left to play, and after going on a 6-0 run they pulled ahead of Team Cloud, 85-84.

With 3.6 seconds to go, captain Natasha Cloud’s hands drove to the basket and drew a foul. Team Harrison challenged the call, but was unsuccessful, resulting in a technical foul, in addition to the shooting foul, as the team was out of timeouts. Cloud has been a consistent free throw shooter all season and she stayed true to that. She went to the stripe and hit all three shots to hand Team Harrison defeat.

Losses in the final seconds can be heartbreakers; they can drain all your momentum for the week if you let them. That’s why Harrison kicked off practice with something inspirational, reflective. She sent her team a clip of a player talking about the importance of communication and how you’re never too cool to talk.

“If I see things in the games that I feel like could help us, I’ll send to the group chat, kind of get everybody’s mindset right.”

Then she’ll go into something energetic like layups, playing music, getting everybody involved talking. After that it’s back to defense.

“The defense is never gonna be perfect. We never know what their other team’s gonna run, who knows what they’re gonna throw at us, but being able to guard basic options, concepts and having options on the defensive end and just having hustle plays. Being able to just go out, guard somebody and take defense personal. I think that’s what I really want to show the team today.”

Team Harrison faced Team Sims Friday night, both teams hungry to get their first win of the week. They came out of the gate firing, but a 20-7 run by Team Sims early in the game gave them a lead they never let up.

Team Sims came ready to apply the pressure tonight. They've scored 7 points off of turnovers in the first half. They have 41-36 lead over Team Harrison with two quarters to go.

At one point Team Sims led by as many as 21 points. Although Team Harrison tried to claw their way back into the game, they could never cut it closer than five points.

“It was nice for me to play how I played but I got to give credit to the purple team (Sims),” Team Harrison point guard Taj Cole said. “They shot over 45% the entire game and I just got to be better, figure out how to get my post players the ball. So I’m gonna go back to the drawing board and figure out how we can get this win tomorrow.”

A different type of challenge for Captain Harrison

Coming into this week, Harrison was one of the winningest players at Athletes Unlimited. She and Toccara Ross were the only players to win eight out of the nine games this season, sharing the lead in win points.

“I’m gonna be thankful for each week. It was a new challenge,” Harrison said.

This week presents Harrison with the challenge of bouncing back after hard-fought losses to finish the week strong.

“I could stay with the same team week per week and, and really get settled in that, but that’s not basketball and that’s not really life. You’re always gonna be in a point where you’re gonna have to learn how to pivot and adjust to what’s around you.”