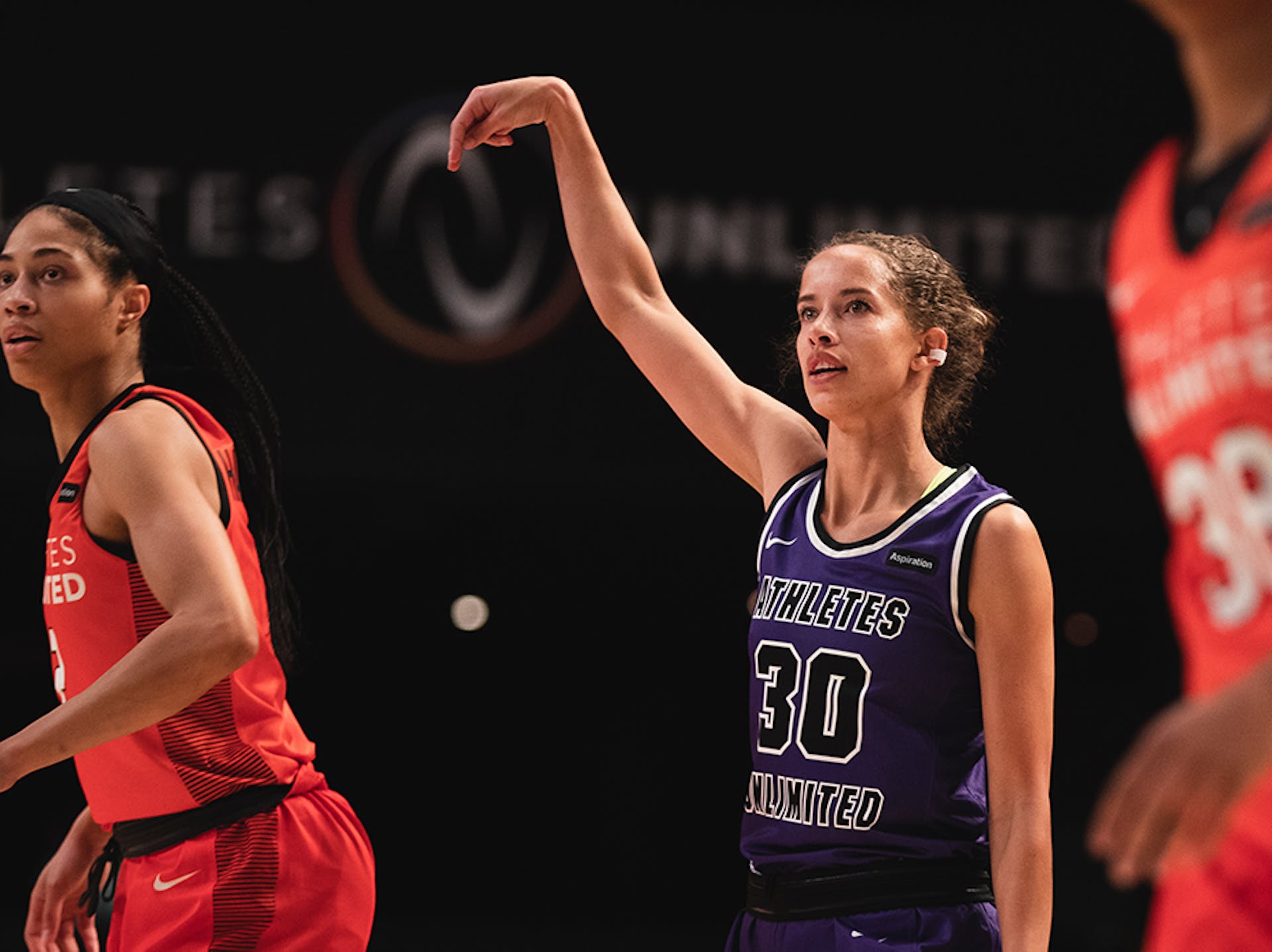 It’s often said basketball is a game of runs.

On Friday evening, the run that mattered most was owned by Team Sims as it used a 20-7 run early on to take a lead it would not surrender and defeat Team Harrison, 87-71.

“One of our biggest takeaways from Wednesday, we didn’t really make a lot of shots,” said Odyssey Sims, who picked up her first win as a captain this season. “We did a lot of team shooting (at practice) of just everybody making shots, being ready, shooting a lot of game shots off the dribble, standstill.

“The energy was high this morning from my team up until the game … It was positive vibes. The energy from all 10 of us was amazing and we were able to win all four quarters and we got the win.”

Team Sims prevented Team Harrison from cutting the deficit any lower than five points and at one point led by as much as 21 points in the third quarter.

“I’m proud of my team,” Sims said. “Five people in double figures. Love to see it.”

Kuster, who had 12 points, also recorded a season-high 11 rebounds for her first double-double of the season. It was her fourth consecutive start.

“One of the biggest things [Sims] really emphasized last game was that we didn’t have energy,” Kuster said. “I think we started the game just flying around on defense and it set a tone. It’s hard to win all four quarters, especially when you have the lead and I think we did a really great job of keeping the energy up.

The duo of Sims and Williams continued its dynamic ways as the pair combined for 39 points, 13 rebounds and 10 assists.

Down 67-53 entering the fourth quarter, Taj Cole went on an 8-0 run to pull Team Harrison within seven points, but was unable to put a stop to Team Sims’ offense. Cole’s 26 points marked a season-high.

“It was nice for me to play how I played but I got to give credit to the purple team (Sims). They shot over 45% the entire game and I just got to be better, figure out how to get my post players the ball,” Cole said. “So I’m gonna go back to the drawing board and figure out how we can get this win tomorrow.”

After disappointing losses for both teams to begin Week 4 action on Wednesday evening, each took the court aiming to score early points. As Team Harrison scored, Team Sims responded, matching with a basket of its own on several occasions. Team Harrison was helped by the three-ball early on from Kirby Burkholder, Lavender and Brown, but Team Sims used a 5-0 run to establish a lead and finish the first quarter, 23-18. Team Sims shot 47.4% from the field and 50% from the arc, while Team Harrison hit 46.7% and 60% from three.

Team Sims came out firing in the second quarter, opening with an 8-2 run forcing Team Harrison to take a timeout. With just over four minutes remaining, Team Harrison began to settle in and get shots to fall. Team Harrison used a 14-4 run to cut its 17-point deficit to five by halftime, 41-36.

In a game of runs for Team Sims, the third quarter featured another, outscoring Team Harrison 18-4 just over halfway through. The team outscored Team Harrison 26-17 overall. While Team Harrison shot 40%, Team Sims shot 47.6% to take a 67-53 lead into the fourth.

Team Sims became the second team to sweep all 300 win points after winning three quarters and tying the second quarter, and winning the overall game.