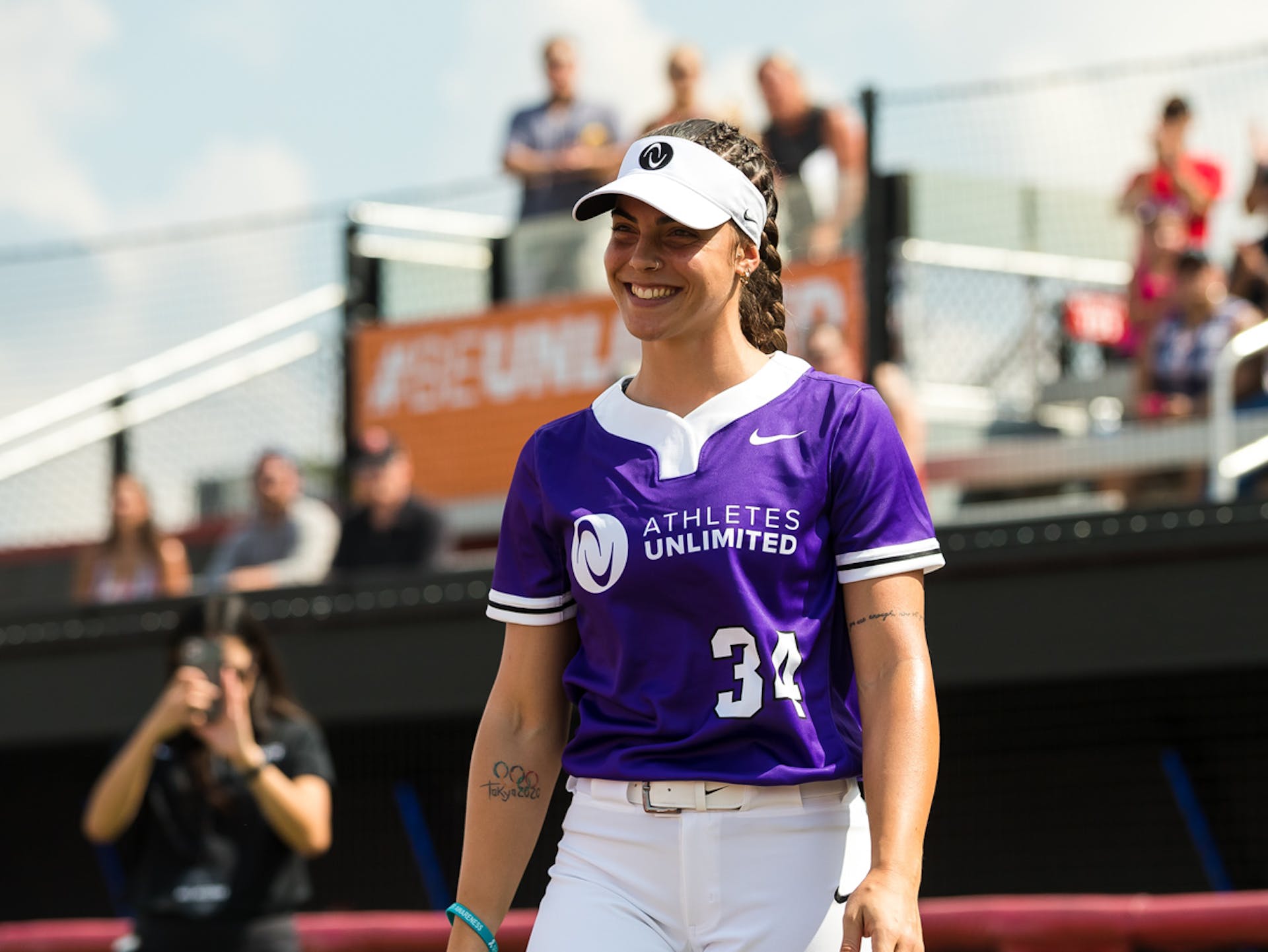 Every player has a story to tell about their softball journey. Erika Piancastelli’s journey is a literal one.

It begins in Modena, at the heart of northern Italy’s Emilia-Romagna region, home of some of the world’s best cuisine and culture. It then goes around the world.

Piancastelli and her family uprooted when she was 5, when her father, Pier Piancastelli, took a job in Carlsbad, California.

“Originally we were supposed to try it out just five years,” the 25-year-old Piancastelli said. “My mom put a limit of only five years. We ended up staying 19. It all started with a job offer.

“My dad is a computer programmer. He had a good job in Italy. But he always wanted to go at least five years overseas. He just threw his name out there, and he got the call. He was like, ‘Why not?’ My mom was like, ‘You’ve always wanted this. Let’s go try it out.’

“Life happens. You start going to school. You start playing sports. You start creating a friend group but have family over there. Once my sister and I graduated from college, my parents were like, ‘We’re going back.’ They were done with it. They live in Italy now, permanently. My whole family is in Italy; only my sister stayed.”

Her family soaked up life in America, but they never let go of their Italian heritage. For that, Piancastelli is grateful.

“My parents always kept the Italian traditions in our household,” she said. “We always had to speak Italian in our house. Everything we did was very similar to our life in Italy. The only thing that changed is that when we went to school, we spoke English, and we spoke English with our friends outside.

“But everything else was very similar [to life in Italy], which I’m very thankful for because now, because of my mom being so strict with us knowing Italian and speaking it consistently, I can be fluent in both. I know a lot of Italians who moved to the States when they were younger and lost that. They lost the language. I’m very thankful.”

Although soccer (called calcio in Italian) is the most popular sport in Italy, diamonds run deep in the Piancastelli family. Her father played baseball in Italy, and her mother, Loredana Auletta, played softball for Team Italy in the 2000 Olympic Games in Sydney.

Piancastelli closed the circle by being captain of Team Italy in the recent Olympic Games in Tokyo.

“Amazing,” she said of the experience. “Very emotional. And I think it’s hitting me more now. I think during it, I was like, ‘It’s my mom.’ But I think now that I’ve experienced the Olympics and when I talk to my mom, it gets me a little emotional because I understand what she’s been through, and she understands what I’ve been through. We’re the only ones. The family is obviously very proud. They’re always supporting. But they don’t understand the backside of what it takes to get there and mentally and physically what you’re going through. I’m very happy to be able to have my mom to lean on and be able to experience that with her.”

It was supposed to be 20 years for Piancastelli to follow her mother’s footsteps to the Olympics. It turned out to be 21 because of COVID-19, but no matter. The number 20 is important to her.

“The number 20 has always been important ever since my mom and dad got together,” she said. “My dad was No. 20 in baseball. When my mom started playing softball in Modena, she was No. 20. She took that number and went to the Olympics with 20 … My sister and I were born on June 20. So that started it.

“And ever since then, little things. We sat at Table No. 20. Then I got on the national team, and 20 was available. So I took 20. That’s where it started. Twenty is a very family-oriented number.

“I think it started also in 2018, we went to the World Championships in Japan. And 20 years earlier, my mom was actually in Japan with the Italian team. So that’s where that whole, ‘Okay, I’m doing everything after my mom,’ [started], and realizing that the Olympics were 20 years after that was huge. It ended up being 21 years, but it’s very special, a very special number.”

Piancastelli, who wears No. 34 in Athletes Unlimited, said her parents never pushed her to play softball, but she eventually took to it, and she wound up playing college ball at McNeese State in Louisiana, where she set many school records.

“McNeese State was the first full ride I got offered,” she said. “Looking back as a travel-ball player, I was just explosive. I had power. But I was nowhere close to the player I became in college. I think in travel ball, I just played. I had fun. I was never the one who got extra work in. I wasn’t that into it. I just played. I enjoyed it with my friends and tournaments.

“So it didn’t really click with me how important just focusing on the small steps was until I got to college. If I went somewhere else, I wouldn’t have become the player that I am because McNeese really bought into me, and my coach (James Landreneau) believed in me and believed in what I could become from day one. He’s the biggest reason for how I was able to make that switch mentally and just buy into what softball is all about.”

While COVID-19 put the 2020 Olympics on hold, Piancastelli signed with Athletes Unlimited for its inaugural season. She wound up tying for the 2020 lead in home runs (nine) with Sahvanna Jaquish while driving in 15 runs and turning in a line of .327/.364/.885.

What attracted her to Athletes Unlimited?

“Just the people they were going to have here,” she said. “When they reached out, I was in Italy. To me, honestly, at that point I just wanted to play because we had been in lockdown. Everything was getting canceled. I was like, ‘I don’t even care how the league is set up. I just want to play.’

“Once they started explaining it to me more, I was really interested in the setup. The whole points system, I really didn’t understand it, but I was very open to it. And just the names that were going to be here. I love competing, and I love playing with so many players that are at the same level, if not higher than me. A lot of these players are players I would never get a chance to play with unless I’m with Athletes Unlimited.”

It would be hard to imagine a better Week 2 of Athletes Unlimited softball than the one Piancastelli enjoyed.

Her weekend included a grand slam and a walk-off single. For her efforts, she moved up from the sixth round of the Week 1 Draft to the first round in Week 2. She also moved from 40th on the overall points leaderboard from the start of Week 2 to 14th at the start of Week 3.

“I’m very pleased,” she said after a workout in preparation for Week 3. “I wasn’t expecting that type of weekend because I started off slow. I started off slow last year, too. I think the most important thing for me is to just have fun and not worry about leaderboard stats or points. I think that’s why the weekend was so fun for me. I kind of put aside the 0-3 weekend I had the weekend before. I’m just going to have fun. And I loved the team that I was on, I absolutely loved it.”

“It just makes it easier when you’re enjoying your time with your team and you’re celebrating other people around you. It kind of takes that pressure off of you, and you can enjoy your at-bats and your playing time.”

Oh, but it wasn’t as easy as it might look. A catcher by trade, Piancastelli found herself in right field for a Sunday game that began at 5:30 p.m. local time. Staring her right in the eyes was a low, bright fireball of a sun.

No matter. She was able to make a nice diving catch on a drive off the bat of Sahvanna Jaquish before the sun mercifully set.

“I was like, ‘Oh!’ I have played right field before. I have played right field with the national team, as well. So I’m a right field-catcher. I have experience in the outfield, but I was not expecting the sun. First time in the outfield with AU, but it wasn’t as bad as I thought it would be. I think I got one ball in the sun. But other than that, I felt pretty comfortable. And having Haylo (ace center fielder Haylie McCleney) right there next to me made me feel very comfortable,” she said.

“If you’re not wanting the ball, it will find you. I was just happy to have Haylo behind me and talking to me the whole time.”

Piancastelli says her goal for the season is to have fun without putting pressure on herself. As for the long term, she said the 2028 Olympics (the next time softball will be played at the Games) is another goal.

“Right now, I’m very focused on just playing, training and putting my body through the grind. I do love athletics, the athletic world, the gym. So I feel no matter what, I’m going to be around training and around softball and coaching. But right now I feel I have my whole life to coach, and I want to enjoy the player aspect of it.”

Meet the moms in Athletes Unlimited