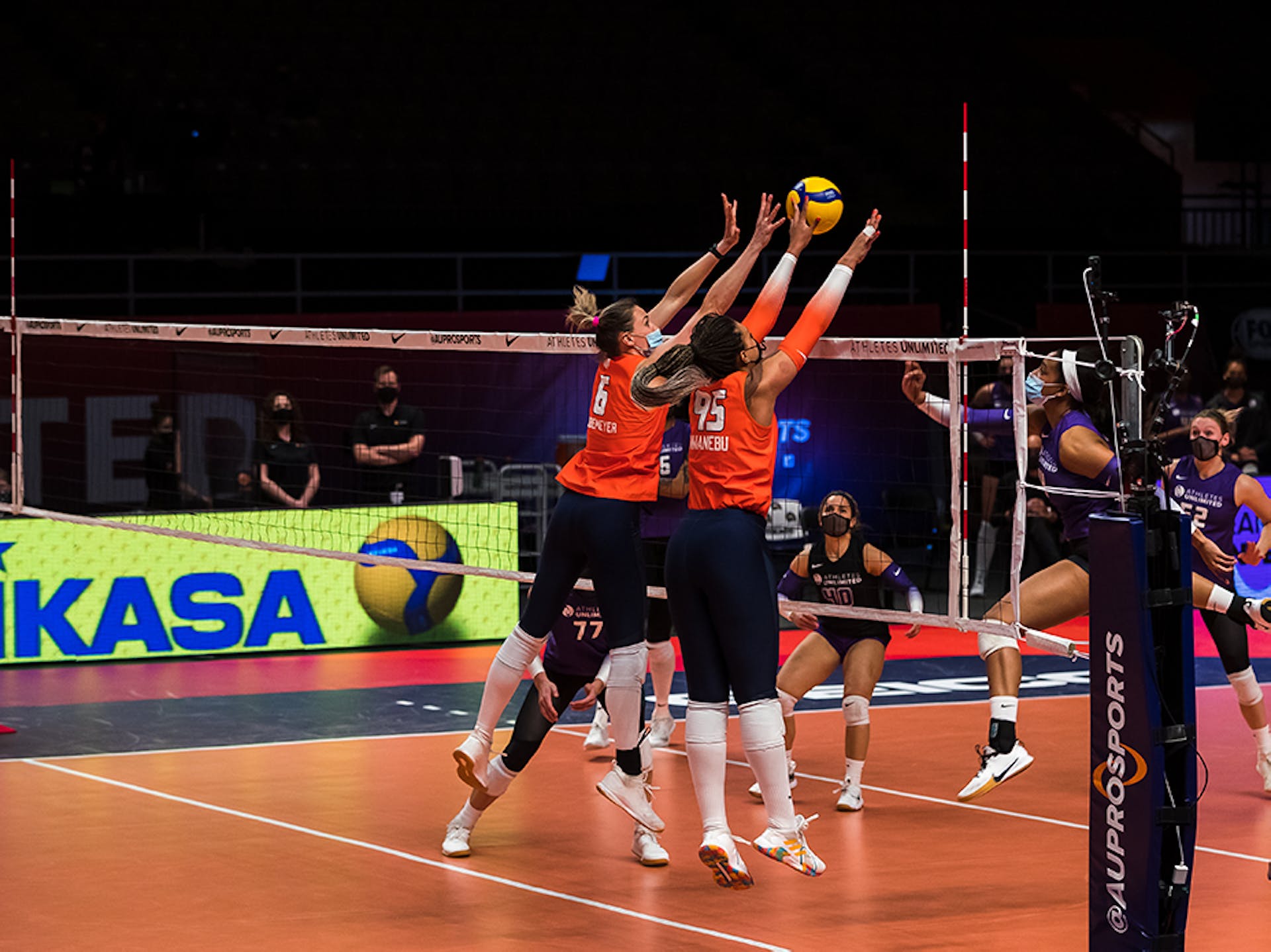 In the opening match of Week 4 of Athletes Unlimited inaugural season, Team Hunter (Purple) battled against Team Larson (Orange). Prior to the match setter Kelly Hunter was 9-0 in matches, the only player in the league to still be undefeated.

Yet, by the end of the match, Hunter’s undefeated streak was over as Team Larson took all three sets and won the match 75-55, earning each player on the team 180 win points.

Team Hunter managed to pull ahead early in the match with a seven point serving run from middle blocker Cori Crocker, leading 10-7 when her run ended. However, two serving errors from Team Hunter, in conjunction with a kill from both opposing captain Jordan Larson and outside hitter Aury Cruz, gave Team Larson the lead again at 13-12.

From there the teams traded points evenly. A crucial challenge came at 22-19 for Team Larson. Larson had hit a ball from the outside pin that was originally called out, but she challenged that it clipped one of opposite Sherridan Atkinson’s hands. The initial call was overturned to give Team Larson a four point lead at 23-19. Middle blocker Lauren Gibbemeyer capitalized on the opportunity and got an ace, putting her team at set point.

Yet, Team Hunter continued to fight back and closed the score to 22-24 with two blocks, but it was the team captain from Team Larson who managed to put the ball away to end the set and earn her team their first 40 win points.

In the second set, Team Larson won more dominantly at 25-16. Throughout the set, Team Larson managed to build their significant lead by siding out on their first service reception and stringing together small serving runs of three or four points. Consistent passes from Larson, Cruz, and libero Tiffany Clark allowed setter Kaylee Manns to efficiently run her offense.

In the third set, Team Larson continued the momentum they’d built in the previous two sets and lead the entire game, winning 25-17. Team Larson had an extremely aggressive serving game, earning three aces. The aggressive serves caused Team Hunter to be out of system for the majority of the set, making it difficult for Hunter to run her offense. Team Larson had four blocks in the set, with Gibbemeyer earning three of those. Gibbemeyer had four kills in the third set and found success running a slide set from Manns, who finished the match with 37 assists.

“It is a challenge playing with different setters every week, but we do have three days of practice leading up to the matches,” Gibbemeyer said. “I think we really tried to dial it in [during practice] and, like Jordan, I played with Kaylee the first week as well and we had a good connection, so that’s why I feel like we were flowing today.”

Larson had 15 kills on 33 attempts for a .270 attack percentage. She ended each game of the night with a final kill. Larson also had 14 digs and two blocks to be voted MVP 1 for a total of 379 points.

Cruz didn’t make a single hitting error throughout the match, giving her a .520 attack percentage on 12 kills. She also earned an ace and eight digs, getting her MVP 2 honors for 369 points overall.

For Team Hunter, Atkinson was voted MVP 3 with two blocks and 10 kills on 34 attempts for a .210 attack percentage. She earned an additional 20 points by being voted MVP 3, which gave her 105 total.