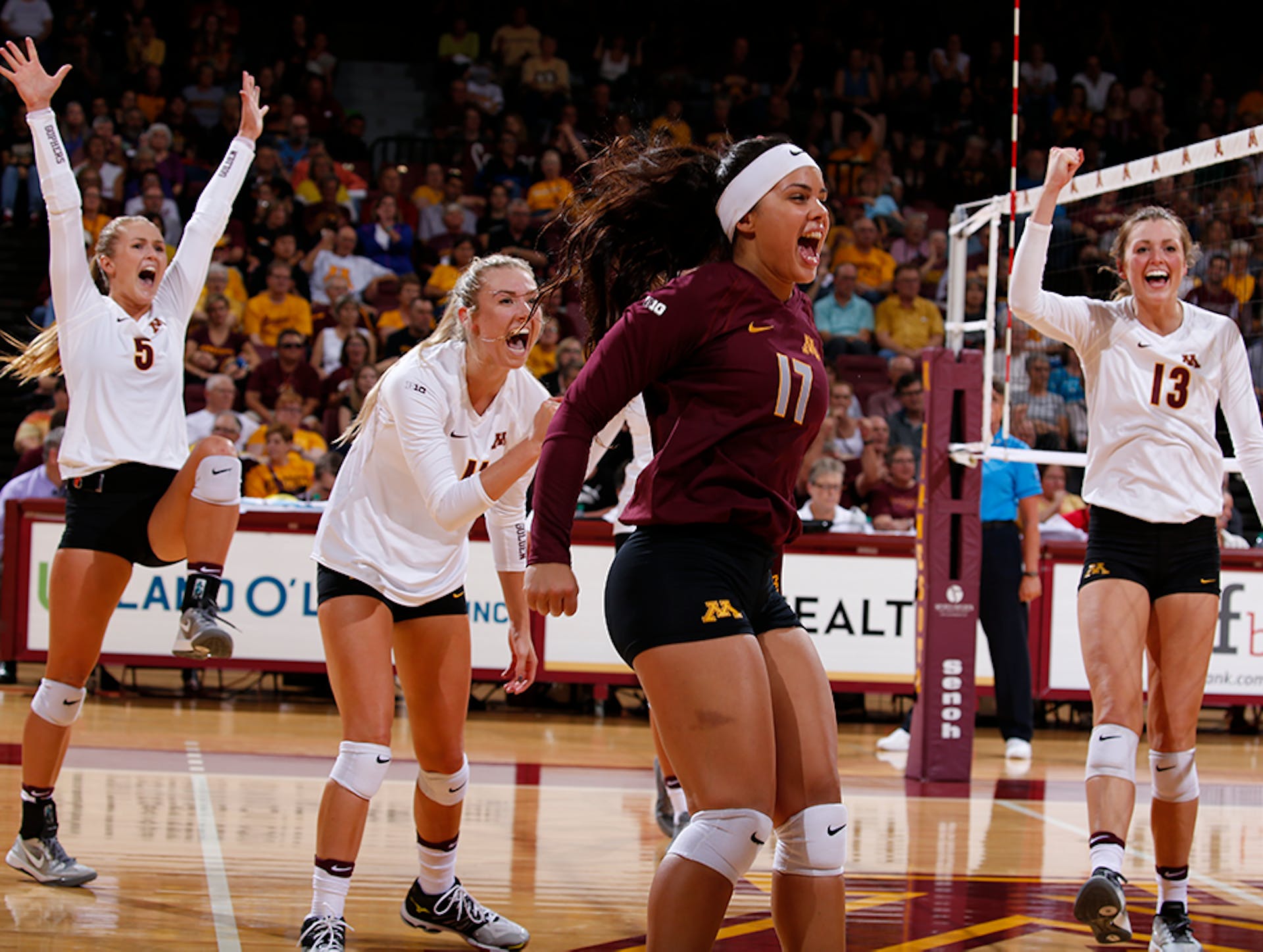 Minnesota is home to one of the most elite women’s college volleyball programs in the country. With nine NCAA tournament appearances in the last decade, six of which the Golden Gophers made it to the Final Four, Minnesota has established itself as a powerhouse when it comes to volleyball.

It should be no surprise that when Athletes Unlimited kicks off its inaugural season in Dallas, Texas next month, the roster will include seven former Minnesota athletes. While each woman has journeyed her own specific path following college, six of those athletes were privileged to wear the Golden Gopher jersey at the same time and now will reunite during Athletes Unlimited Volleyball.

What brought you to Minnesota?

Samantha Seliger-Swenson: Throughout most of my recruiting process, I actually had my heart set on going to school out in California. Funny side note, my parents had a secret bet going for where I would end up: somewhere in California versus UMN. The coaching staff asked if I wanted to come on a visit, and I went. I always had a soft spot for the Gopher volleyball program because I grew up going to the games every weekend and idolized all the Gopher greats of the 2000s. I went on a weekend long visit, met Hugh McCutcheon and the team, and I knew it was exactly where I was supposed to be – it was home. I committed right then and there on my visit, cancelled the recruiting trips out in Cali, and never looked back! One of the best decisions of my life.

Erica Handley: I grew up going to Gopher games and always loved the culture and passion that the team and players always brought. I attended my first year of college at Syracuse University and it just wasn’t the right fit. When searching for other options for my new school the opportunity to play for the U came up and I just couldn’t turn it down.

What are a few of your favorite memories while playing at Minnesota?

Molly Lohman: One that sticks out in the top of my head is a specific match in 2016. We had worked our way to No. 1 in the AVCA poll, and we were playing No. 2 Nebraska at home. Down 0-2, we went into the locker room between sets two and three and Coach Hugh gave a speech that has stuck with me to this day. Coming out for the third set very inspired and with a sold-out home crowd on our backs, we were able to pull it off and win in five.

Taylor Morgan: Winning the Big Ten and going to the Final Four. And just [arriving] to practice or games early to just hang out with the girls!

Paige Tapp: Playing at home, in front of an always sold-out crowd at the Maturi Pavilion (PAV for short) will always be my favorite. We went on an incredible streak my last two seasons, never losing a home game. I believe it was a 36-game winning streak for us at home.

Handley: There are so many great memories from playing at the U, but the best memories always came with the amazing teammates I was with all the time. The laughs and memories in between games are things that shouldn’t be taken for granted when going through the crazy experience of a Division I athlete.

Dalianliz Rosado: The main focus was to protect the house, so outside things would not affect what we were trying to do which was to take the program to a higher standard. Being a good teammate played a big role in our culture. We would hold each other accountable so that we could be the best version of ourselves.

Lohman: At Minnesota, we were very much about team dynamic and culture. Making sure that we were all on the same page with our goals. We had a mission statement that we wrote each year, in which we decided what our goals were and what we needed to do to achieve those goals. This is something we lived by and looked at every day. We expected a lot of our teammates and held each other accountable each and every day to become the best we could be. From this we were able to create a realm of trust and safety on and off the court as a team. This, I believe, is a huge reason as to why the Minnesota program has a reputation for success.

How did playing for Minnesota prepare you for your future professionally?

Handley: My dream of playing professionally after college was actually one of the biggest reasons I transferred to Minnesota. I knew that the coaching staff was amazing and that I was going to learn as much as I could from them, so I went for it and it worked out.

Rosado: Playing for Minnesota exposed me to play at a high level all the time. I played with and against great players from who I learned a lot. The Big Ten Conference and the NCAA Tournament are great and super competitive, but to me some of the highest level of volleyball I played in was at our gym during practices. There I learned what commitment, hard work, and dedication looks like.

Seliger-Swenson: I think playing at Minnesota set me up really well for professional life. Our coaching staff know what that overseas lifestyle is like, as well as our many alumni who would often reach out and give advice. At Minnesota I learned a ton about what hard work truly is, which is something I also have to implement on the professional scale. Last season, I often found myself thinking of what Hugh would tell me in specific instances at practice and games. He has impacted me more than he probably knows, both in life and volleyball! Also, the overall high level of play in the Big Ten is the best in the country and really prepared me for the next level of professional play.

What does it mean to you to represent Minnesota volleyball and how do you hope to use your platform to impact younger volleyball players?

Lohman: Minnesota volleyball will always hold a special place in my heart. I am so fortunate to have had the opportunity to play there. I love that years after graduating, I still feel as if I am representing them in a way. I hope that just by sharing my journey at Minnesota and beyond encourages young players to continue working hard and reaching for their highest dreams. It is all worth it.

Seliger-Swenson: It is an absolute honor and privilege to represent Minnesota volleyball! That program has given me so much. [I’m] forever thankful for the memories and lessons I learned during my 4 1/2 years there. I hope to use my platform to encourage and inspire younger volleyball players who have big dreams!

Morgan: It means so much to be able to represent Minnesota because they helped me so much. I hope to show [younger volleyball players] what hard work and the love of volleyball can get you.

Tapp: Minnesota gave me the opportunity of a lifetime and saw a potential in me that I had never seen myself. I would love to use my voice to inspire other young athletes to dream bigger than they ever have before and know they can be a part of something great. There are endless opportunities available for those who work hard and dream big.

Collectively, each athlete showed the utmost respect for the Golden Gophers coaching staff. Hugh McCutcheon has served as the head coach at Minnesota since 2012 and has led the Golden Gophers to the NCAA tournament seven of eight years. He’ll have the privilege of watching each of these six athletes make history as Athletes Unlimited Volleyball kicks off the inaugural season on February 27.