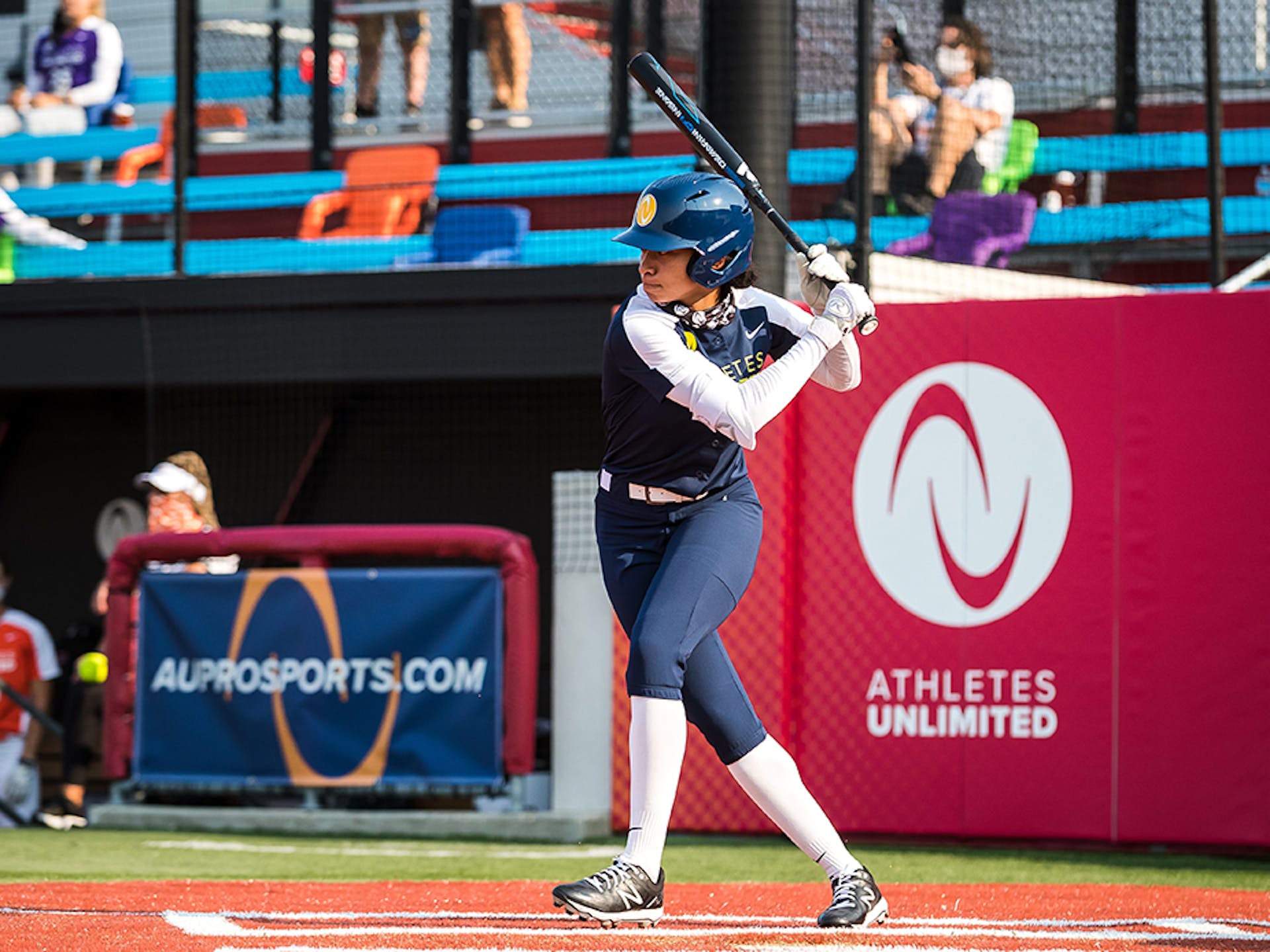 The beauty of play in Athletes Unlimited is that it giveth – and it taketh away.

Team Wagner picked up 50 points for the victory plus 60 points for innings victories – a 110 point total.

Power, speed and timely gap hitting, as well as some shutdown relief pitching featured prominently for both teams.

Team Wagner jumped on starting pitcher Danielle O’Toole for a pair in the first inning as Jazmyn Jackson singled near the second-base bag with one out and came home on a double to the left-center gap by Amanda Chidester. Nerissa Myers followed with a solid single to center to score the second run.

Team McCleney got one back in the top of the second on a homer to right-center by Michelle Moultrie. The ball was hit well, but it fought a strong wind blowing in to clear the wall.

However, Team Wagner answered swiftly. Jackson drove in a pair with a double, and Chidester singled her home. Jackson earned 10 individual points for the single and 20 for the double. She totaled 140 for the game, factoring in the team points. Chidester also piled up 140 points and was named MVP 1 for an additional 60 points, and 200 points overall.

The importance of power to scoring points was illustrated by Team Wagner’s Sami Fagan. She earned 40 points for her fifth-inning homer to right-center and was named MVP 3, for an overall total of 170. Three singles for Nicole Pendley gave her 30, and with the added 110, she wound up with 140 points. Pendley was also named MVP 2, notching 40 extra points, and 180 overall.

The early runs for Team Wagner came at the expense of lefty O’Toole, who gave up five earned runs in 1.2 innings. The flip side of Athletes Unlimited’s scoring system came into play with O’Toole, where she received 20 points for recording the five outs but gave up 50 for the five earned runs. Her team won the third inning to get 10 points back for her, netting her -20.

There is more than one way to help your team on offense and score points in Athletes Unlimited – even without swinging the bat. Morgan Zerkle of Team McCleney demonstrated that in the top of the fourth inning when she entered the game as a pinch runner and promptly stole second and third bases to earn 20 individual points. Her steal of third was a heads-up delayed steal. She wound up with 30 points overall for that as a sub.

Of course there is risk involved on the basepath as runners who are caught stealing are penalized 10 points each time.

Kylan Becker went 4-for-4, all singles, for Team McCleney, earning 40 points plus 10 innings points, for 50 overall.

Wagner worked three innings, giving up five hits and three earned runs. The team victory helped her score 116 points – she earned 36 for the outs she recorded but gave back 30 for the earned runs as she benefited from the team points.

She’s sits comfortably as the overall points leader with 356 total points across the two days of scrimmages. Pendley sits behind her with 300, and Fagan behind her with 290.