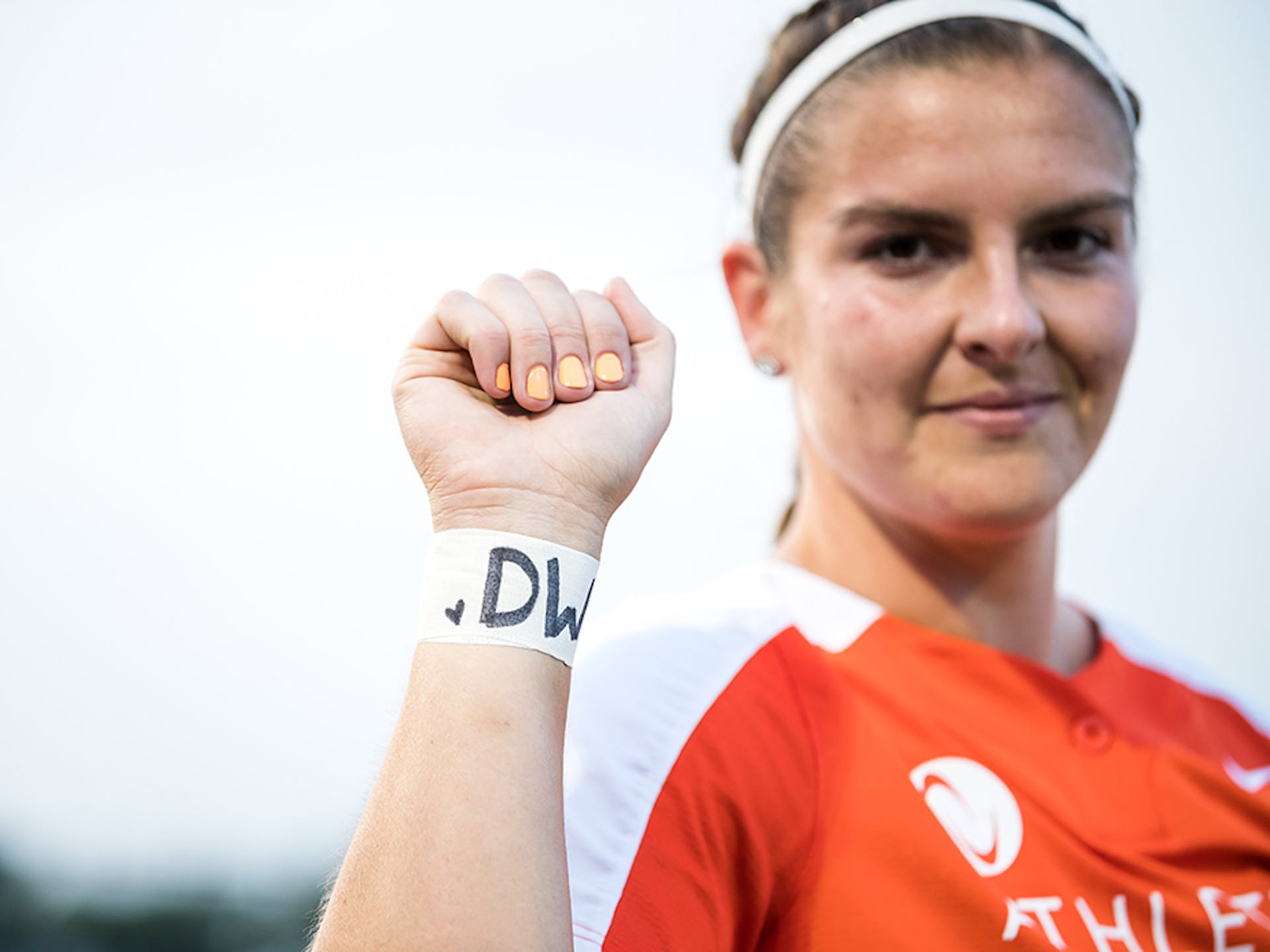 No matter how many reps they complete in the gym or how many grounders they take in practice, talk to almost any accomplished athlete and they will tell you the same thing: it’s the people around them who make them great.

Some players have had an inspiring coach who believed in them when no one else did, or teammates who challenged them to become better. Others have parents who dutifully took batting practice with them in their childhood backyard, or a sibling rivalry that pushed them to great heights. For Haylie Wagner, one person from her life stands out the most: her cousin, David Wagner, who died by suicide when she was 11 years old.

“He was kind of like that big brother that I never had and always wanted,” she said. “I loved being around him.”

Though the two were 19 years apart they were linked by a shared birthday — creating a special bond between just the two of them.

“He was my favorite cousin,” Wagner said.

She remembers long afternoons in the backyard batting cage, or cozy days inside playing Clue. David was the kind of cousin who went out of his way to make the younger children feel special. At some point, Wagner and her brother created a tradition that involved rubbing his bald head and saying “I wish I were a fish.” They thought it created good luck. To them, David was a walking good luck charm.

She still remembers the day when she playfully used that good luck charm for the last time. It was the day after Christmas and David had been in their backyard practicing his hitting.

“I was looking out the window and I can remember myself staring down at him and watching him hit off the machine. I remember going down there and having a good time with him,” she said.

Wagner hadn’t known much then of her cousin’s struggles — she knew he was working to overcome some difficulties in his life, but had no idea how complex his emotional burdens were.

After a family brunch, where David stood out by ordering a bowl of clam chowder – a family favorite, Wagner and her brother again rubbed David’s head for good luck and watched him drive away, unaware it was for the last time.

Gone instantly were the games of Clue, the backyard softball, and the birthday bonds.

Instead, Wagner was left to piece together at a young age what it meant not just to die, but for someone to kill themself. It sparked in her a desire to reach anyone else who might be contemplating suicide with the message that they are enough.

“They’re worth it, they’re enough, there is hope. I love and miss my cousin. I know that they’re important and people do love them. They’re making the earth a better place with them in it,” she said.

One difficulty Wagner feels her cousin might have struggled with is not having someone around him who he could open up to. “There weren’t as many resources then,” Wagner said.

While there are more resources now than ever before, people do still struggle to reach out for help due to the stigma around mental health. “Oftentimes they slip through the cracks because they’re dealing with it internally,” said Dr. Alison Kanter Agliata, a licensed clinical psychologist. “If you get the sense that someone is hesitant or just not ready yet, provide different options for reaching out.”

Dr. Agliata suggests the crisis text line or phone line as a way to begin seeking help, if talking to a professional in person is too daunting. “Giving a variety of options in terms of reaching out for support, usually there’s something that will work for everybody. Most people don’t want to die, they want to feel better.”

Feeling better often starts with tackling mental health issues before they reach the point of crisis. “People can forget that life truly ebbs and flows,” Dr. Agliata said. “There are lots of high points but there are going to be low points along the way. We’re all just doing the best to find our way through. When those low points hit we forget our foundational pieces of self care are the number one things that protect us.”

When it comes to being a good ally to someone going through a hard time, Dr. Agliata says being present and concerned is often the most important place to start. She urges friends not to be afraid to say something along the lines of, “You seem off lately, is something bothering you?” or, specifically, “Are you having thoughts of hurting yourself?”

“They tend to be awkward questions but they are very important,” she said.

For her part, Wagner wants to be an ally to anyone who needs someone to talk to. She can be reached on Instagram at @haywags17, where she posts and advocates for suicide prevention, honoring David.

She thinks often of her cousin David and of what she would tell him were he still here. Mostly, she jokes, she’d probably be able to handily beat him at Clue now, which would be an amazing feeling.

“I don’t think I understood the game at age 11,” she said. If she could see David again she’d probably tell him he’s in for a real Clue battle. She’d also want to talk about those regular ebbs and flows of life. “I would tell him that I love him and that we have so much to catch up on. I would love to tell him everything about high school, college, all of my softball games that I was part of,” she said.

There’s one more thing she’d like to do — catch some of the good luck her walking good luck charm always brought.

“I would rub his head and say, ‘I wish I were a fish,’ tell him he is the greatest cousin and that I love him beyond words,” she said.

It’s that little tradition she takes with her every time she needs some luck in the circle.

“When I am struggling, I’ll rub my wrist briefly to remind myself that he’s with me,” she said. She also started a new tradition after he died: in every game since 2008 she wears tape on her right wrist with his initials, a reminder that he’s with her. Following Athletes Unlimited policies and procedures around independent messaging, she won’t take the field with any overt nod to David but is focused on honoring him every day and with every game.

David might be gone, but a piece of his legacy lives on today.

With Three Days Until Tip Off, It's Time for an Athletes Unlimited Crash Course

Welcome to the New Age of Competition