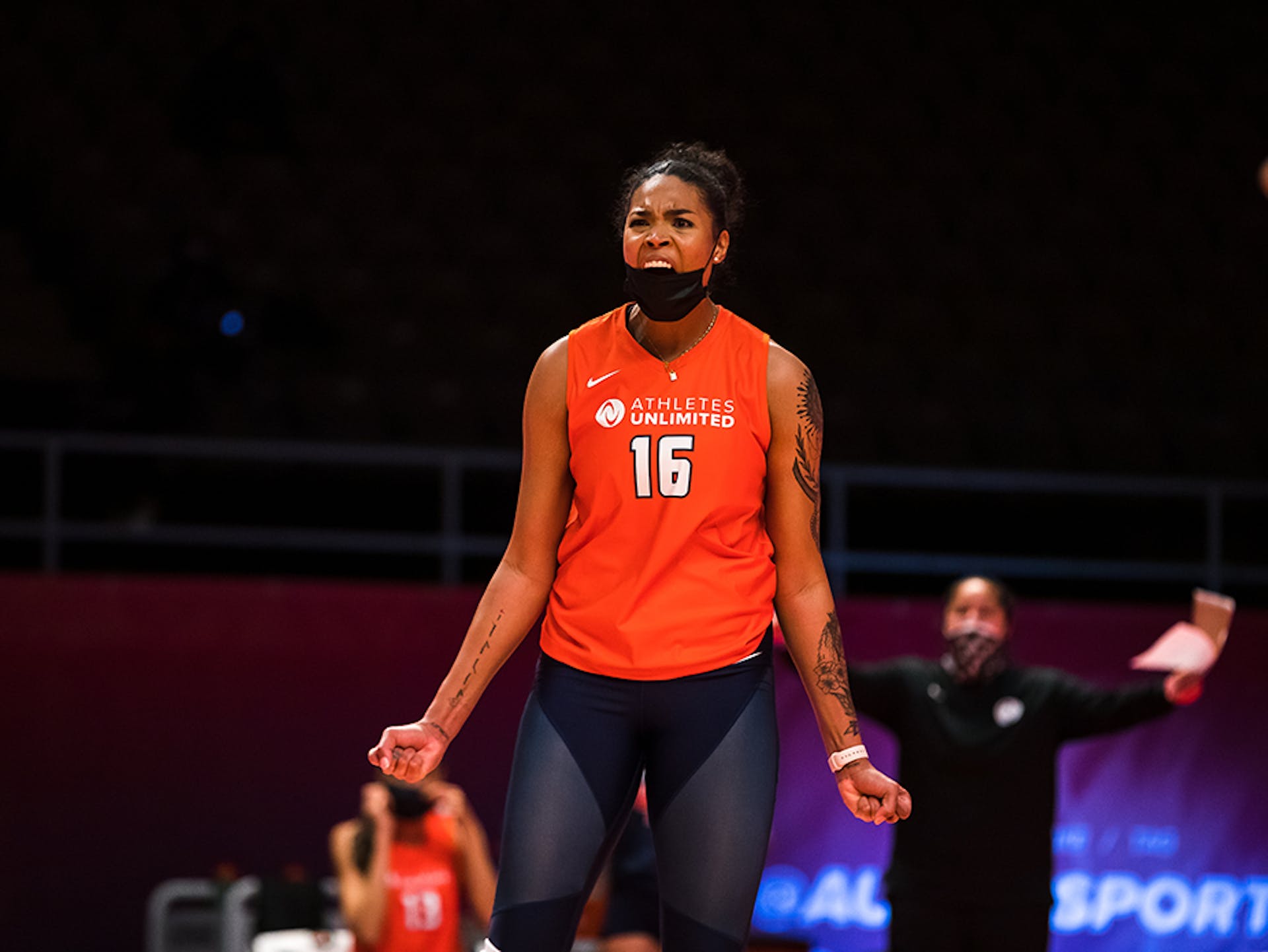 Set 1 started off as an intense match-up between the opponents. In Sunday’s match against Team Clark, De la Cruz hit .530 on 38 attempts and was an unstoppable force for Team King, but Team Cruz reduced her hitting percentage to .070 to begin the match. Team King opposite Sheilla Castro, a two-time gold Olympian for Brazil, elevated her team’s attack percentage with five kills on ten attempts and only one error.

Team King responded to their loss by dominating the second set, ultimately winning 25-15 and obtaining 40 win points. Due to a lower leg injury, Sherridan Atkinson took Sheilla’s place, but quickly became a troublesome force for Team Cruz as she scored six kills on seven attempts and had two blocks. Midway through the match a three-point serving run from team captain Brie King allowed her to build on her team’s lead and a five-point serving run from middle blocker Cori Cocker closed out the match. Atkinson scored the last two points for her team by getting a block followed by a kill.

With a set won apiece, both teams entered the third set in hopes of earning the final set’s win points, making for a close match up and a dog-fight late in the set. Team Cruz came out on top to end it at 29-27. The team trailed until captain Aury Cruz went on a five-point serving run to give her team the lead at 20-19. During that run, opposite Willow Johnson had two kills and one block. Team King fought off six set points before Team Cruz was finally able to close out the match with a hitting error from De la Cruz after a long rally. The set win gave Team Cruz another 40 win points, but with the overall score being 74-69, Team King took the match for an additional 60 win points.

“I do think [with the unique scoring system] it’s just a lot of adjusting to do,” Atkinson said. “It’s hard because we just want to play, but then with these weird point things you have to think about that and I kind of don’t want to when I’m playing, but I’m like, ‘Okay, we need one more point even though we’re winning by this much.’ It’s a lot to process but I’m happy that we won.”

Atkinson’s performance in the second and third sets earned her MVP 1 honors for an additional 60 points to her 104 stat points, for a total of 264 points overall. She finished the match with 11 kills on 19 attempts for a .530 attack percentage.

Despite being well-defended by Team Cruz in the first set, De la Cruz slowly began to improve her hitting percentage and finished the match with 12 kills on 37 attempts, six digs and one block for 79 stat points and took MVP 2 honors for another 40, putting her at 219 overall. Going into the match, De la Cruz was fifth on the overall leaderboard, and currently sits in the No. 1 spot. The matchup of Team Sybeldon vs. Team Clark will determine if she maintains a position in the top four and secures a captain spot for the Week 2 Draft.

Although McCage did have her first hitting error of the season in the second set, she still hit an incredible .420 with 11 kills on 19 attempts and had two blocks. She finished the night with 202 points overall, with 20 points coming from MVP 3 honors and 102 coming from individual stats.