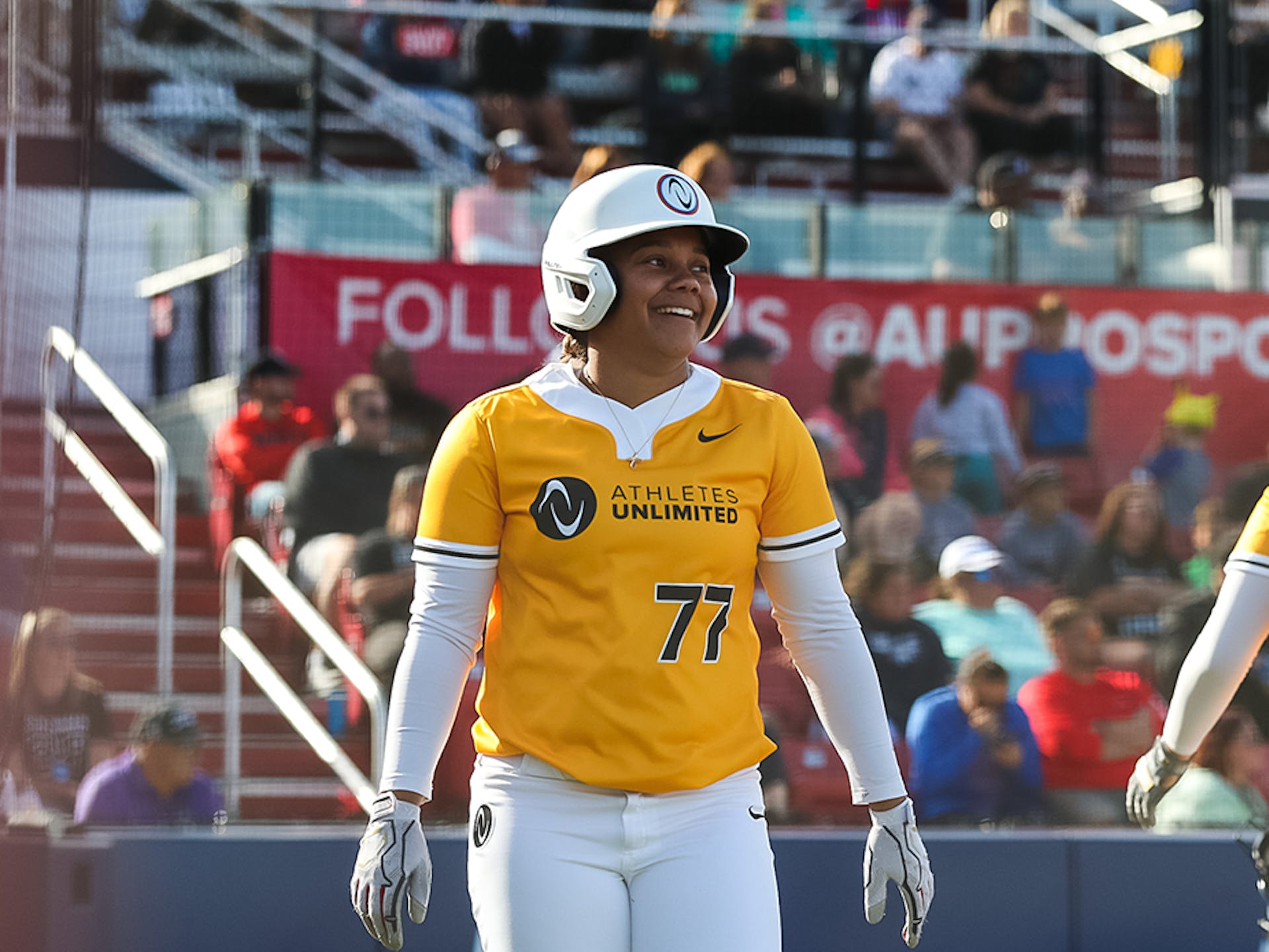 That was the story of Team Ocasio’s 7-1 victory Saturday over Team Jaquish in the second game of Saturday’s Athletes Unlimited doubleheader at Parkway Bank Sports Complex.

Aleshia Ocasio is captain for a third straight week, and her Gold team looks very much like her Purple squad of a week ago. That’s because Ocasio was able to draft nine of the players she had last week.

Her team finished strong Week 4 on a high note, and her Gold squad rode her starting pitching and some timely hitting to victory Saturday over Sahvanna Jaquish’s Purple team.

Getting that many players back for another week requires some luck of the draw, but there’s an element of design in it, too.

“It’s funny, someone mentioned that earlier,” said Ocasio, who improved to 5-4 on the season and increased her first-place points total on the overall leaderboard from 1,558 to 1,808. “It’s absolutely by design. I’m a firm believer that you have to have a cohesive unit and have comfortability with each other to be successful.

“Yeah, it was for sure by design I drafted players who I felt comfortable (with) on defense because that’s what’s most important to me. We have a pool of players who can rake, but for me, defense is really important, and I just feel really comfortable with this group.”

Team Gold did its damage from the third through the seventh innings, winning all 70 innings points an addition to the 50 for the team victory. Ocasio also won MVP 1 honors for an additional 60 individual points.

Kelsey Stewart and Gwen Svekis opened the top of the fourth with doubles. Center fielder Morgan Zerkle made a diving attempt on Stewart’s ball but couldn’t come up with it. Stewart could advance only to third on Svekis’ double because it looked like right fielder Jaquish might catch it at the wall.

With runners on second and third, Erika Piancastelli singled home Stewart. A single by Amanda Sanchez scored Svekis to make it 3-0.

Svekis had an RBI single in the fifth. Jazmyn Jackson hit her first homer of the season, a two-run drive over the wall in right in the sixth to make it 6-0 against reliever Odicci Alexander.

Team Jaquish scored a run in the bottom of the sixth on a single by Tori Vidales before Piancastelli homered in the seventh. It was her third homer of the season.

Piancastelli is a catcher by trade, but she has been behind Svekis (the game’s MVP 3) at that position. The adjustment, she says, has not been difficult.

“I feel like my whole life I’ve been either catching or playing DP (designated player),” she said. “On the (Italian) national team, it’s the same role. I like doing whatever the team needs. If I need to just hit that day, if I need to catch, if I need to play somewhere in the infield, I’m just going to do whatever I need to do. It’s not different for me. I’m very used to it. The hard part for me is just staying focused the whole game. It’s super easy on this team.”

“I actually didn’t feel like I had my best stuff, to be honest,” Ocasio said. “I got behind a lot in counts. But our defense was still working. Gwen again called a great game. It’s by design that I picked her for my first pick. We’ve been working well together for the past few weeks. Yeah, I didn’t feel like I had my best stuff, but we made it work, and our offense really turned it on today. So I’m really happy about that.”